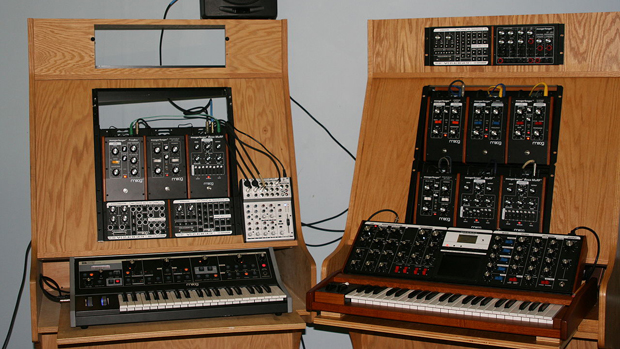 Over at the website of the Bob Moog Foundation, electronic music historian Thom Holmes has an interesting post about some lesser-known cinematic uses of the Moog, the pioneering analog synthesizer popularized by Wendy Carlos with 1968’s Switched-On Bach album, which introduced the public at large to the idea of electronic sounds as more than simple novelties. Carlos would go on to the soundtracks for A Clockwork Orange, The Shining and Tron, but many other movies in the ’60s and ’70s were quick to latch onto the instrument’s possibilities.

Paul Beaver and Bernie Krause were among the Moog’s most productive practitioners at the time. They were extremely prolific while working under the inadvertently goofy handle “Beaver & Krause”: Holmes says Krause told him that in the period from 1967-74, they probably added Moog sounds of some kind to over 150 movies, though not always in a soundtrack capacity. As part of his mission to archive all commercial recordings featuring the Moog, Holmes’ post rounds up some unexpected movies the synthesizer was used on, including the unsettling opening credits of They Shoot Horses, Don’t They? and the with-electronics version of the James Bond theme used at the start of On Her Majesty’s Secret Service.

Holmes’ post is worth reading in full, especially for Moog-heads. His most unusual find can be listened to below: the theme song for the truly obscure 1970 film Didn’t You Hear, a full description of which can be read here. It’s a very of-its-time plaintive ballad lifted to another level by the combination of quavering male vocals and sparsely fragile Moog.