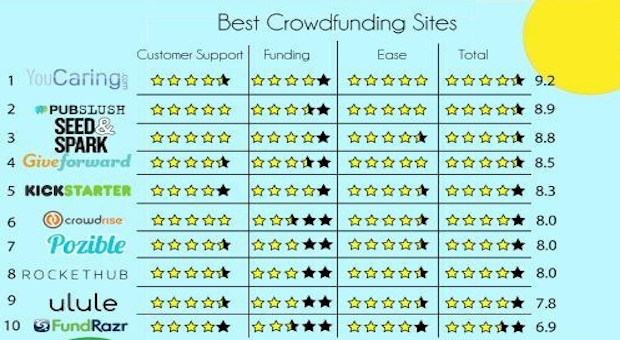 by Sarah Salovaara
in Filmmaking, Financing
on Aug 11, 2014

Crowdsunite, a website that specializes in crowdfunding reviews like only a millennial startup could, recently compiled a list of the industry’s top 10 platforms based on user reviews. Weighing the funding success rate, customer support and user friendliness, Crowdsunite concluded that the niche hybrid Seed&Spark ranked higher than Kickstarter, while the likes of IndieGogo and GoFundMe didn’t even make the cut. A plausible reason for this is that the survey considered platforms that cater across several industries (publishing, medical), but the reasons behind their viability are nonetheless worth considering for your next campaign.

While users have frequently taken issue with Kickstarter’s “all or nothing” policy, it appears they can also feel marooned and taxed in the lead-up. “It’s a very grueling process,” commented one reviewer. “Just the setup itself took a huge amount of time and effort and Kickstarter required lots of changes before it was able to go live.” Pubslush, a platform for nascent authors, ranked second, on account of its high success rate (58.89% to Kickstarter’s 32.12%) and relatively low fee (4% to Kickstarter’s 5%). Many users also seem to appreciate its narrow focus, with one nothing that, “It helps them better understand their author clients.” In other words, there are no potato salads to detract from your mission.

The same goes for Seed&Spark, which has both a higher success rate (69% to 40.20%) and higher campaign average ($14,700 to $12,878) than Kickstarter, perhaps on account of its sense of “community,” which can be used to leverage funds from strangers. Kickstarter has been perceived by many as the crowdfunding leader since its launch, but it’s always good to keep an eye out on the competition, which sometimes may be better suited to your needs. Head to Crowdsunite’s website to check out the full rundown on all film-related platforms.