Evolution of a Filipino Filmmaker: Lav Diaz’s From What Is Before 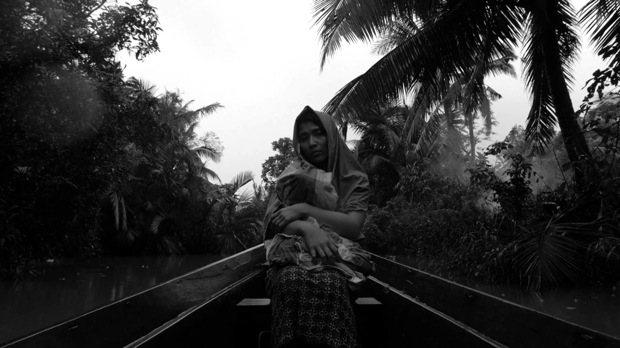 From What Is Before

by Giovanni Marchini Camia
in Festivals & Events
on Aug 15, 2014

67th Locarno Film Festival, From What Is Before, Lav Diaz

Although Lav Diaz’s artistry is formidable, the first thing anyone ever mentions about his films is their prodigious length: the longest, 2004’s Evolution of a Filipino Family, clocks in at eleven and a half hours. Waggish aficionados refer to last year’s Norte, the End of History as his short — it’s just over four hours long. Apart from the attendant notoriety, this renders Diaz’s films extremely rare. With the exception of Norte, which was picked up for distribution in the US, UK and France, the only chance of seeing his work is at festivals and special screenings.

Whenever one of these occasions comes around, cinephiles get giddy with excitement. This was the case at this year’s Locarno International Film Festival, which has the international premiere of his latest, From What Is Before, marking Diaz’s first entry in the main competition of an A-list film festival. The blogo- and twitterspheres blew up when the film’s festival selection was announced prior to the festival. Five and a half hours after the first screening, hyperbole started gushing out — and rightly so.

All of Diaz’s films deal with his country’s turbulent recent history. From What Is Before is the third time he’s addressed the era of martial law under Ferdinand Marcos — “the Filipino nightmare,” as he describes it — completing a chronologically inverted trilogy: 2001’s Batang West Side depicts the nightmare’s aftermath, examining the plight of Filipinos living in Jersey City, Filipino Family spans its duration from 1971 to 1987, and From What Is Before hauntingly explores its genesis. From the start, the visuals are spectacular. Having deviated into color with Norte, here Diaz returns to his preferred black-and-white, whose low contrast bestows an almost sepia-like quality on the images befitting the historical material and once again proving his unparalleled mastery of digital video. Even the most hardened analog puritans would be hard pressed to find fault with Diaz’s breathtaking tableaux.

The opening shot of a rural landscape is overlaid with a caption reading “Philippines, 1970” and an elegiac voice-over informing us that “this film is based on memories [and] the characters are based on real people.” The first hour introduces the inhabitants of a tiny barrio buried in the countryside, observing them in a series of protracted extreme long shots, embedding the characters in monumental nature as they go about their daily chores and practice customs such as a healing possession ritual. In this initial chapter, the camera never moves and barely a word is spoken. The most vocal character is the wind, which rages incessantly and combines with the austere cinematography to instill an oppressive sense of dread that will intensify over the course of the film, reaching nigh unbearable levels at the climax. Slowly the film’s protagonists emerge: a young woman caring for her mentally disabled sister, a little boy and his uncle, a solitary winemaker, and the village priest. These characters are familiar from Diaz’s previous work and their role as archetypes is clear, as is the barrio’s function as a microcosm through which to revisit and assess a particularly painful chapter in the nation’s history.

Another caption, superimposed over a shot of a house in flames, announces that the year is now 1971. This is the first tangible sign that something is seriously rotten in the state of the Philippines. Then more houses are set on fire, several cows are found butchered in the jungle and, with no culprit coming to light, the village is overcome with rising panic and paranoia. Over the sound of a woman’s desperate wailing, a third and final caption reads “1972.” Anyone acquainted with Philippine history knows that this is the year martial law was introduced, ushering in a decade of terror and extreme human rights abuses. From this point, the sense of village community and solidarity completely disintegrates. Eventually the army arrives and takes over the barrio, sending everyone running for the hills except the central characters, who are left alone on a vertiginous downward spiral with no hope for salvation.

The obfuscation of the past through lies is a central theme. The little boy thinks he lives with his uncle because his parents have quarantined themselves on an island due to leprosy. In fact, his father tried to kill him as a baby after butchering his mother, but he was saved by a stranger who adopted him as his nephew and vowed never to divulge the truth. Late in the film, several characters witness a gruesome suicide and agree to cover it up to salvage the honor of the deceased. Ostensibly these lies are spread to prevent more suffering, when actually they have precisely the opposite effect.

Philippine history is afflicted by analogous mendacity and the purpose of Diaz’s cinema is, in his own words, to “reclaim what’s been lost” — cinema, he says, is about “digging for truth, just like philosophy.” Although he insists the length of his films is simply a result of being Malay — a people with a traditionally more languid conception of time (also the reason why, allegedly, Malays make love for 15 hours at a time) — Diaz’s extended running times are likely also motivated by this endeavor to do right by history. Ultimately, when dealing with such momentous and horrifying events, it feels like a necessary measure of respect, paid by the filmmaker and expected from the audience.

This ethical resolve is palpable throughout and there are two shots reminiscent of ones from two Western films that can be used for comparison. The first depicts a rape, capturing the event in a single lengthy and stationary take that immediately brings to mind the infamous nine-minute rape scene from Gaspar Noé’s Irreversible. Unlike Noé, Diaz doesn’t provide an ominous preamble to heighten suspense and while he holds the shot for a long time, he cuts away before a single piece of clothing is removed. No actual sex is shown and there certainly isn’t a need to bash the victim’s face into a bloody pulp — or the audience into submission — to get the message across. The viewer isn’t left feeling exploited and the scene is no less powerful for it.

The other shot is of militiamen torturing two villagers by hanging. Again the camera is static, and the image of the villagers hanging from a tree in center frame while minutes pass by wordlessly recalls the scene from Steve McQueen’s 12 Years a Slave, in which Solomon Northup is tortured in a similar manner. The latter exemplifies the self-flagellating gratification of McQueen’s film. In a beautifully composed long shot that cannot justify its extreme aestheticization, Northup hangs alone for an interminable stretch. As the rope cuts into his neck, all that is heard is his desperate sputtering, amplified to the max so as to bludgeon the viewer with the import of what’s on screen. It feels like a coercion of guilt, not a quest for understanding.

In From What Is Before, although the shot is also meticulously arranged, the figures filling the frame — victims surrounded by their torturers — are held in a full shot, disallowing the visual pleasures of the long shots otherwise dominating the film (the same is true for the rape). There is no sound and the shot’s length isn’t used to traumatize the viewer, but to emphasize the normalization of horror: as the men dangle in mid-air, the militiamen stand around smoking cigarettes and staring out into space, bored senseless. Diaz doesn’t condescend to viewers by considering them too stupid to recognize blatant atrocity; his intention is to bring to light what has been kept under wraps.

From What Is Before doesn’t provide easy, ready-made answers and emotions. Instead, it calls for constant viewer participation. There are small but noticeable technical flaws throughout the film, such as illogical gradations in lighting, inept sound design or a scene in which the bulge of a microphone transmitter pack is clearly visible through an actor’s t-shirt. These could have arisen out of budgetary limitations or be accounted for as amateur mistakes. However, Diaz is used to working on astonishingly low budgets and, considering not only his years of experience but also the technical proficiency evidenced by a film like Norte, it would seem more logical for these to be subtle yet fully intentional distancing effects. The film’s final moment is made up of such an ambiguity. It would be a disservice to the reader still intending to watch the film to describe it; suffice it to say that an actor is put through an extremely demanding physical feat which culminates in an unexpected action.

This action can be interpreted as a glimmer of hope for the Filipino people at the end of a thoroughly dismal tale or as an unintended mistake that Diaz decided to keep in order to lift the curtain on the artifice one last time, thus concluding with a reminder that while his is an investigation of truth, it ultimately remains a film and, as much as a film may endeavor to approach truth, it would be deplorably vainglorious and complacent for a filmmaker to claim to have attained this goal.