Five Questions for Do I Sound Gay? Director David Thorpe 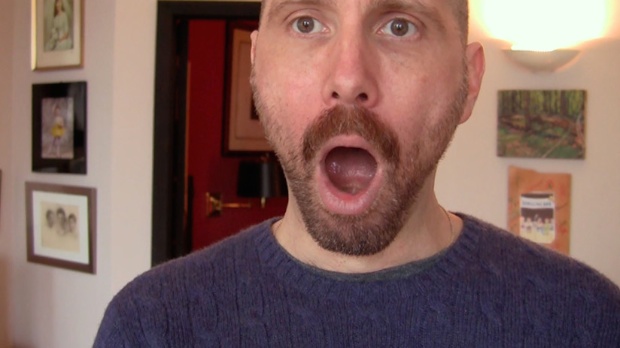 David Thorpe's Do I Sound Gay?

In 2014 it would seem there are few societal taboos left for cinema to explore, but journalist-turned-director David Thorpe has found one with his debut documentary, Do I Sound Gay? Exploring, historically and personally, “the gay voice,” Thorpe listens to himself and others to find out why many gay men wish they sounded like someone else. Columnist Dan Savage, Star Trek’s George Takei and comedian Margaret Cho all make appearances in a film that seeks not so much to shatter stereotypes as explore the complex meanings behind them. Do I Sound Gay? premieres in the Toronto International Film Festival’s Mavericks section on Sunday, September 7.

Filmmaker: You’ve said that your interest in the anthropology of the gay voice began after a break-up. What linked those two things?

Thorpe: Finding myself single and in my 40s was a rude awakening. I started to think, “What’s wrong with me? Why am I still single decades after coming out? Why can’t I find love?” All my ostensible flaws became painfully apparent, and, somewhat to my surprise, my voice was on the list. Even in my depressed state, I recognized that there was something bizarre about this intense dislike for my own voice. When I found out that other gay men had similar feelings about their voices, I knew I had to get to the bottom of it.

Filmmaker: The film features a number of public figures who discuss their own speech patterns and accents. Did you approach anyone who bristled at being included in the film — who was either self conscious about their speech, or didn’t hear their own voice the way you did it?

Thorpe: I approached one iconic sitcom actor who I think most people would identify as having a stereotypically gay-sounding voice and affect. I was taken aback when he declined because he said he had never thought about the subject. Maybe he really hadn’t…or maybe he didn’t want to go there. Sounding gay can be a radioactive topic. On many, many occasions, people would say to me, “Oh, you should interview my friend so and so, he’d be perfect for your film. He sounds totally gay!” and then they would say, “But I could never bring the idea up with him.” Really, why? Because it’s such a horrible affliction and his manhood could crumble at the thought he sounded gay? Every time I heard that I felt a bit more determined to keep going.

Filmmaker: What is something you learned that surprised you about “the gay voice” during the making of this movie?

Thorpe: I’ve been out of the closet since 1989, but I had never ever discussed my anxiety about “sounding gay” with other gay men. When I started shooting, I discovered that it was a source of deep, lifelong anxiety for one of my best friends! The most surprising thing about making Do I Sound Gay? was the discovery that, by and large, gay men have a keen awareness of how “gay” their voices sound but rarely, if ever, talk about it. I made the movie, because I wanted to have that conversation and explore what that keen awareness might mean.

Filmmaker: What do you think you brought to this film by virtue of your career as a long-form journalist? How did that work help you become a film director?

Thorpe: I was pretty fearless and determined about cold-calling people of all kinds for interviews, which I think was probably the main thing I brought from my experience as a print journalist. On the other hand, it was exciting to discover all these purely cinematic opportunities that documentary filmmakers have. As a print journalist, I didn’t need to think about how someone would read on camera! In a doc, it’s not just what someone says, it’s also how they say it. Will the audience be able to relate to them and what they are saying as a wholly visible person?

Filmmaker: Was it difficult to raise the financing for the film? And did you have difficulties convincing funders who normally do social issue docs that yours was a topic worthy of their funding?

Thorpe: Our main investor, Impact Partners, invests in films that they think will have a social impact, and they were strongly attracted to the idea of starting a conversation about homophobia through funny, emotionally-engaging first person storytelling. It’s a testament to their belief in the approach of Do I Sound Gay? that they committed well before we had folks like David Sedaris and George Takei on board. We also raised a lot of our funding on Kickstarter. Almost 2,000 people contributed to the campaign. They responded to that mix of personal story, humor and a social issue.