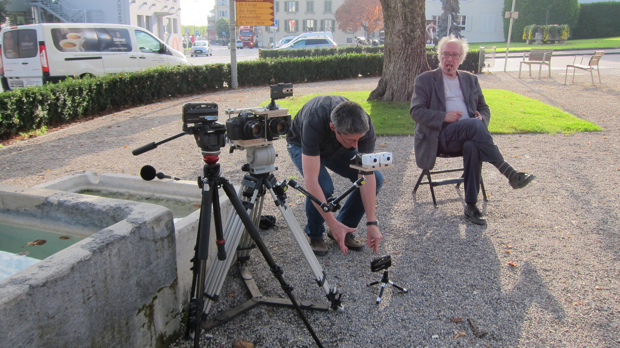 To a degree, the content of Jean-Luc Godard’s Goodbye to Language will be familiar to viewers who have kept up with the director’s latter-day work: aphorisms and quotations by the score, obdurately unidentified characters whose relationship to each other is unclear, snatches of disparate music cued and cut off with disorienting abruptness. It’s not for everyone, but Godard’s first three-dimensional film is so visually astonishing that a lack of comprehension isn’t a barrier. Outdoors, sea and land stretch out into a receding horizon deeper than anything you’ve seen. Inside, there are more knockout distortions transforming even the most banal objects: a simple overhead shot of a bathtub looks down at a space that’s clearly narrower than it is and far deeper than it could be. The shot that cued spontaneous applause at the premiere Cannes screening is an event all in itself: a simple image of a man, a woman and her husband becomes eye-melting when one camera follows to the right as the latter two move toward a lake, creating two separate 2-D planes that reunite into 3-D when she walks back to where she started.

These images are courtesy of Fabrice Aragno, Godard’s d.p. on 2010’s Film Socialisme and a director and artist in his own right. “I don’t say I’m a director of photography — in France it’d be chef opérateur, chief operator, “ he explained over Skype. “I cannot be chief of anything. And director? No. You just watch the lights. With the Canon, when we saw that you can receive the light with natural light, we don’t need to put other kind of lights.” The production has six credited cameras; the bulk of its footage was shot with a Canon 5D at the start and ended, after four years of production, with a Canon 1DC. Nearly everything is lit solely with natural light, with Aragno and Godard conceiving of themselves as receiving and responding to light rather than constructing it; as Aragno said, because of this, “the direction is from the outside to inside the camera, it’s not from inside the camera to outside.”

Before production began, Aragno decided to explore 3-D from the ground up. Building his own rigs to hold two cameras, he was determined not to be bound by convention or precedent. “When 3-D became a new technique, at the same time very quickly there became rules,” he explained. “People say, ‘You can’t be more than six centimeters between the two cameras. If the background and foreground are too far away, it cannot be good.’ So I learned the rules, and I saw that it’s not very interesting with the rules.”

Then came a period of testing. “Working in theater, I worked one year in engineer school,” Aragno said. “I learned how to use my hands to build things in wood or iron or aluminum.” One of those tests involved building a rig to hold two Flip Minos. “I made a couple of tests with friends at their home of a boy and a girl,” he recalled. “I asked the boy to go to the kitchen on my right, and the right camera followed him and the left stayed, so the 3-D broke. The girl is in your left eyes and the boy on the right. When he was in the kitchen, your brain didn’t know how to watch. It hurts to watch a little, but it was interesting, and when the boy comes back to the girl, the two cameras were again in classic 3-D. So I showed it to Jean-Luc and he decided to use this for the film” — hence the applause-getting shot described above.

For the deep-horizon outside images, Aragno similarly ignored the usual guidelines: “Hollywood says you shouldn’t have more than six centimeters between cameras, so I began at 12 to see what happened.” Likewise, for the foreshortened perspective of the bathtub shots, he brought the cameras closer together than traditionally advised. Images of Godard’s dog, Roxy, were shot by the director himself with amateur pocket cameras from Sony and Fuji, images taken every time the two went for a walk.

According to Aragno, Godard had rushes in both 2-D and 3-D, but it’s unclear how much 3-D he actually watched. (He did the rough cut on a linear tape editing system in 2-D.) Still, said Aragno, “sometimes he really directs for 3-D. An interesting image for me was in the first part, when the couple is coming by night at home and you just have their shadows [in the car]. The shadow on the floor is 2-D, it’s not 3-D. It’s 2-D in a 3-D image.” And that’s appropriate for a film whose subject, as usual for Godard, is as much film itself as the plot, since “cinema is a shadow and a projection.”

Aragno wasn’t just the d.p. but the sound recordist and mixer as well, crafting a mix that aggressively separated channels, with competing dialogue on the left and right, mirroring the visual aggression. The postproduction was very hands-on, with the final mix, color correction and 3-D done in Godard’s house, “in a little basement without lights or windows,” Aragno said. “We built a small surround mix and 3-D image place. We edited together during two weeks all the film, mixing and color correction at the same time. I had Pro Tools working at my left hand, I had DaVinci Resolve 9 at my right. My third computer had a player to synchronize both of them. We made a little mix, we watched two or three minutes of the film, then we stopped, I said what I was thinking that we could change, he said the same. Then we changed the image and the mix, and that’s it.”