Cinematographer Laela Kilbourn on Shooting Sundance Competition Doc, How to Dance in Ohio 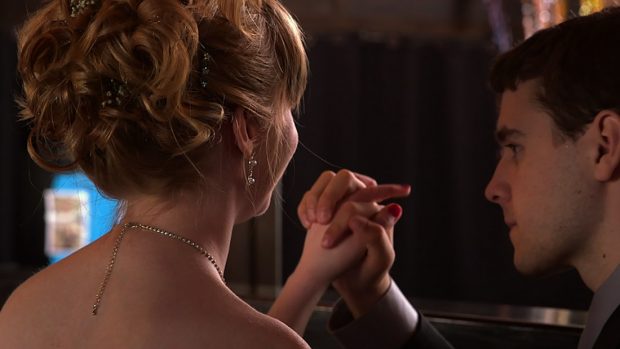 How to Dance in Ohio

With documentary credits such as Magic Camp, My Brooklyn and Word Wars, cinematographer Laela Kilbourn entered Alexandra Shiva’s How to Dance in Ohio with a specific challenge, which she discusses below: to sensitively film without disrupting teens and young adults with autism. How to Dance in Ohio is a film following three teenage girls as they prepare for one pivotal rite of youth passage through three months of practice, rehearsal and therapy. Below, Kilbourn discusses Canon cameras, lighting for trust and more. How to Dance in Ohio premieres in the Documentary Competition of the Sundance Film Festival on Sunday, January 25, 2015.

Kilbourn: Bari Pearlman, the producer of How to Dance in Ohio, and I had worked together on a previous project (The Strangest Town in Alaska), and a part of our collaboration on that project which she said she had greatly valued was my feedback on how different subjects we were filming came across on camera, how strongly they registered as characters. Both she and the director of How to Dance in Ohio, Alexandra Shiva, were interested in working with a cinematographer who could provide that sort of input.

Filmmaker: What were your artistic goals on this film, and how did you realize them? How did you want your cinematography to enhance the film’s storytelling and treatment of its characters? And what were the biggest challenges posed by production to those goals?

Kilbourn: How to Dance in Ohio posed a special challenge for all of us as filmmakers in that we were filming teens and young adults on the autism spectrum, whose responses to external stimuli are varied and unpredictable. It is always important on a documentary project to make your subjects as comfortable with your presence and with the camera as possible, but it was particularly so on this film. People living with autism are sometimes uncomfortable with breaks in routine, sudden movements, changes in light and sound. So we had to design our approach with this in mind. One step we took, before we even started filming, was to meet as a team (director, producer, cinematographer, sound recordist) with each of our potential film subjects and describe in detail what we would be doing and how, including demonstrating the camera and sound equipment and how they would be used, and giving the subjects the opportunity to ask any questions and resolve any potential fears. This seemed to go a long way toward making our presence, when we did start shooting, a non-issue for our characters.

Kilbourn: We filmed How to Dance in Ohio on the Canon EOS C300 EF, using three Canon zooms, the 16-35mm, 24-70mm, and 70-200mm. I had been waiting for a camera like the C300 to come along and it did just in time for this project — I have worked with a lot of different cameras over the years, and I am partial to the color space and look of Canon cameras as well as their user interface. My first feature documentary to go to Sundance (Word Wars, in 2004) was shot on the Canon XL1, which at the time of shooting was quite the happening camera (remember the days of MiniDV?), and I was very happy with the results. So when the C300 came out, a full HD large CMOS sensor camera with a smart and compact design that produced a very clean image, I was excited to use it. Its compactness was particularly important for filming How to Dance in Ohio, as I didn’t want to intimidate our film subjects with a lot of intrusive gear.

Kilbourn: I had to be particularly aware of the needs of our subjects when lighting for this film — people living with autism are sometimes very sensitive to light. So I used indirect and soft lighting setups for our interviews, and we would check in with each subject first before the interview started to be sure they weren’t bothered by any of the light sources. Verité scenes were shot with available light — if it was necessary to turn on more practical lights in a particular space, again we would ask our film subjects first if that would present a problem for them. This sounds more cumbersome perhaps than it actually was — and it all served to build trust between our characters and our crew.

Kilbourn: Our most complicated scene was the spring formal dance, which involved all of our characters at once, first spread out over different locations and them coming together en masse for the dance itself. This was the only day we shot with multiple cameras: we brought in two additional teams, each consisting of a camera operator and sound recordist, to help accomplish all the coverage we needed. I met with my additional operators in advance and we discussed both the look and style of the film, and they watched some of the footage I had previously shot to get a sense of what was needed. We also discussed the particular characters they would each be covering and what to be aware of and sensitive to. And we were in communication during the actual day in case anything unexpected came up.

Kilbourn: I kept my design of the look in camera understated and natural so we would have room to work with later in the color correct, and I was really fortunate to work with an excellent colorist, Will Cox at Final Frame Post.