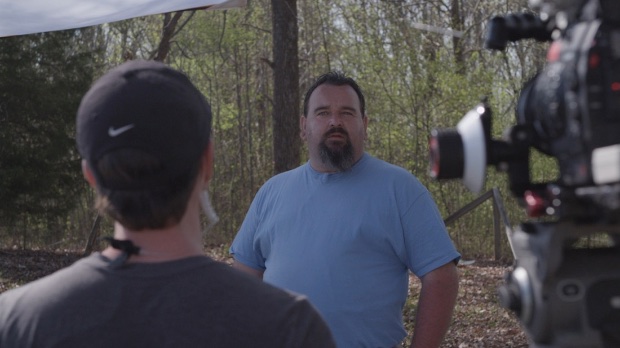 An eccentric Southern tale that feels like a Harry Crews-scripted edition of Storage Wars, Finders Keepers tells the story of two men battling — in courts of law and public opinion — over the ownership of a severed foot. The foot belonged once to John Wood, amputated following a small plane crash that also killed Wood’s father. When Wood failed to make payments to his storage unit, it became the property of local North Carolina huckster Shannon Whisnant, who parlays his contested ownership of the foot into a roadside tourist attraction. Directed by Bryan Carberry and Clay Tweel, collaborating for the first time on a feature, Finders Keepers , premiering at Sundance in the Documentary Competition, turns what might be simply an oddball tale into a thoughtful riff on left turns and second chances. Below, we ask the directors about their collaboration, their relationship to their subjects, and the challenge of finding an ending.

Filmmaker: How did you come across this crazy story and what made you decide to develop it into a feature doc?

Carberry & Tweel: Our producer, Ed Cunningham, overheard someone talking about this story at a BBQ joint in Oklahoma back in 2008. He was immediately intrigued and contacted some of the local press who had been covering the story before he ultimately flew to North Carolina to check it out himself. While he was there he filmed a bunch of material on his camcorder for research purposes, and upon arrival back in L.A. he showed some clips to our producer, Seth Gordon. We all knew that the hook of the story was interesting, but what Ed captured — even from that first footage — showed us how special and layered the subjects of the film truly are. What we thought was a funny tabloid story quickly became something bigger, and we knew it deserved a feature length of time to fully portray these ideas to an audience. But more importantly, we saw an opportunity for a project in which we could provide an obscene amount of leg puns.

Filmmaker: Yours is a first-time directorial collaboration. How did you wind up pairing and deciding to direct this film together? Who came on to the project first, and how did you divide the work?

Carberry & Tweel: Back in 2008 Seth, Ed and Clay began working on Make Believe, a documentary about teenage magicians, and they needed production help. Bryan was fresh out of film school at USC and he joined the team, making an immediate impact with his energy and talents. Ed had already showed Seth and Clay his footage from NC, but once Bryan saw the interviews with the Wood and Whisnant families a few years later he really spearheaded the group to find a way to finish the film. We launched a Kickstarter campaign, and while Clay was finishing work on Print the Legend Bryan undertook a lot of the filming for Finders Keepers in NC. Once everyone was together, we were able to sit down and focus on the post process, refining the the story through editing, discussions, rough cut assemblies and feedback screenings.

Filmmaker: What was the process of discovery involved in making the film? From the time you started, what uncertainties existed in terms of the characters and how you thought their stories might or might not resolve themselves?

Carberry & Tweel: A satisfying and clear resolution is often one of the hardest things to come by in the documentary process. For us, we understood that the characters we were following had an incredible surface-level story, but the surprises were non stop in terms of the richness and complexities of the drama between them. Discovering the true impact of the tragic plane crash that cost John his leg, and cost the rest of the Wood family its patriarch, was a huge turning point in our perspective on the story. We were able to understand how relationships fractured and emotional boundaries were drawn. So once our subjects started to confront these boundaries, it gave us hope that we could capture some legitimate emotional change. But, really, we just wanted to stick around with cameras to see how it all shook out.

Filmmaker: The film makes a statement about the lure of celebrity — particularly its effect on one of your two subjects, Shannon Whisnant. Do you think his decision to participate in your documentary born of the same impulse that caused him to participate in all the other media? Did you characterize your project to him in a different way, and do you think he was looking to your film to reveal something different?

Carberry & Tweel: Our pitch to both Shannon and John about the purpose of this film was the same from the beginning — we want to tell the story behind the story of this stranger-than-fiction headline. And as the film evolved and people changed, the meaning of what that story was changed with it. But our ultimate goal is simply to get to the heart of “why people do what they do.” As far as Shannon’s motivations are concerned, we felt his “addiction to fame” would on one hand allow us great access but could also afford a really interesting juxtaposition to John’s own substance abuse problems.

Filmmaker: What conflicts existed in terms of securing access to your subjects and their stories given that they were simultaneously being courted by other media and, for all I know, Hollywood? And how did you resolve these conflicts?

Carberry & Tweel: One challenge that we came up against was less to do with the subjects of the film and more to do with the town of Maiden itself. While we were able to convince John and Shannon’s families that we were telling a deeper story than they were accustomed to, the people of Maiden were more skeptical. Their beautiful small town had been inundated and, in their collective eyes, exploited so much by the media that not a whole lot of people wanted to talk to us on camera. This forced us to structure the film in a way that relied on the audience to see the story exclusively through the lens of the media or the people directly involved in these events.