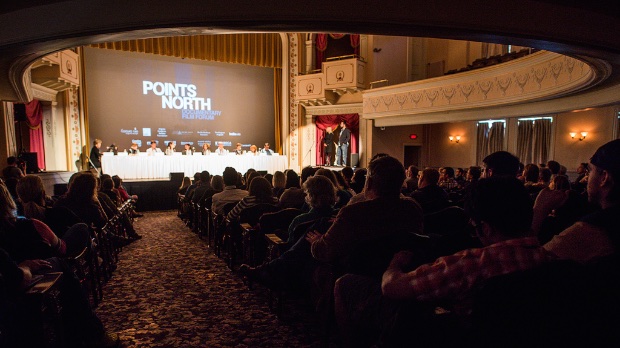 The Camden International Film Festival is now accepting submissions for its Points North Fellowship, which provides grants bringing five teams of documentary filmmakers to September’s Points North Documentary Forum and trains them in the art of the pitch.

The Fellowship takes place before, during and even after the festival. Before the festival, filmmakers receive a day of intensive training and mentorship, sponsored by the Main Media Workshops. Then, filmmakers go on to pitch their projects to an array of international funders, broadcasters, distributors and producers — all before a live audience. Past panelists include representatives from the BBC, HBO, A&E IndieFilms, Participant Media, ARTE, Discovery, ITVS, POV, Al Jazeera, Sundance Institute, Tribeca Film Institute, and Cinereach. Recipients receive passes to the festival, four nights of accommodations, a travel stipend, and become eligible to win the Points North Pitch Prize and Modulus Finishing Fund, which includes, according to the press release, “a cash prize, three consultation sessions with Tribeca Film Institute, participation in the Tribeca Film Institute Network Market held during the Tribeca Film Festival (April 2016), and 60 hours of free sound mix or color correction services from Boston-based Modulus Studios worth approximately $10,000.”

Ryan Harrington, vice president of artist programs at the Tribeca Film Institute, commented to Steve Dollar in last Fall’s Filmmaker, “[The Points North Documentary Forum] is really unique. To my knowledge no one else is doing this kind of forum in the U.S., but it happens all around the world.”

Points North alumni include The Reagan Years, In Country, Mateo, Leviathan, Betting the Farm, Drawing the Tiger and The Bolivian Case. Submissions for the Points North Fellowship are now open through July 24, 2015.