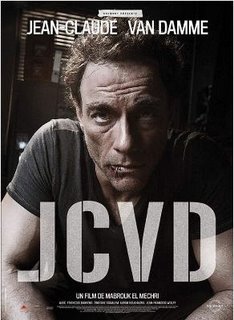 There comes a time in every star’s career when he or she has to come to terms with the fact that they may not be relevant anymore. Most often actors don’t have to come to this career roadblock as quickly as actresses because, frankly, it’s a sad fact no one wants to write roles for a 30-plus women, though they have no trouble finding roles men that age — except if they are action stars.

In the time Jean-Claude Van Damme was roundhouse kicking his way into the worshiping teens in the 90s he was as big a box office draw as Stallone, Schwarzenegger or Willis. But since then half of that quartet moved on (Willis to dramas like The Sixth Sense; Schwarzenegger to politics) while Stallone tried dramas (Copland) and failed which led to him to go back to the action thing (for better or worse) and resurrect his iconic characters Rocky and Rambo. Though for Van Damme drugs and personal problems dropped him off the Hollywood map and onto direct-to-DVD titles or films that only play in Europe or Asia, where he’s still a draw.

This forces the now mid-40s Van Damme to assess his relevancy and what the Muscles from Brussels concludes is no one likes anything more than a star with a sense of humor.

Mabrouk El Mechri‘s JCVD is in no way a spoof on Van Damme’s career, but instead a study on the world’s obsession with celebrity — those who want to be near it, and those who crave to have it. The film opens with Van Damme being, well, Van Damme. In a beautifully choreographed sequence, he punches, kicks and shoots his way out of insurmountable odds to save the girl. But when the scene is botched by a gaffe by the set department we see how much everyone really cares about being on a Van Damme film when even the director doesn’t care what happened. Why does Van Damme go through this abuse? We jump cut to find out he’s in a custody battle for his daughter. But his fate his sealed when his daughter takes the stand and says she doesn’t want to stay with him because she wants the kids at school to stop making fun of her.

With an agent who doesn’t take him seriously anymore and lawyer fees he can’t pay, Van Damme returns to Brusels to clear his head and plan his next move. But when he’s caught in the middle of a bank heist he’s once again thrust into the spotlight.

The plot surrounding the heist and eventual standoff is contrived, but that doesn’t really matter, it serves its purpose to thrust us into the mind of a former star still hungry to be back on top. Mechri sprinkles in funny one-liners and a running gag about Steven Seagal taking all Van Damme’s roles throughout the film but it’s Van Damme’s touching performance that is the most memorable. The highlight is his monologue towards the end of the film. Sitting in a chair in a dazed state the camera follows him as he seems to float towards the ceiling and finally settles up in the rafters exposing the set lights. Looking directly at the camera he talks about the highs and lows in his career, breaking down into tears mid way through.

Like the film, it has to be seen to be believed.

DVD on sale this week through Peach Arch Home Entertainment.