“CRIPS AND BLOODS: MADE IN AMERICA”

Crips and Bloods: Made in America, Documentary, Stacy Peralta 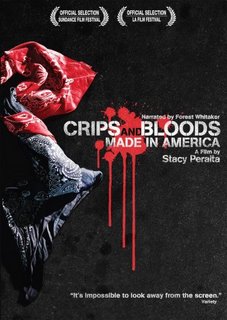 Stacy Peralta uses his knack for dissecting counter-cultures to highlight the two most violent gangs in America with Crips and Bloods: Made in America.

Since his breakout Sundance hit Dogtown and Z-Boys, about the iconic skateboarders who revolutionized the sport (Peralta was one of the Z-Boys), Peralta has stayed in the alt-sport realm as his second doc, Riding Giants, looked at the history of surfing (it was also the opening film at 04’s Sundance). Now Peralta leaves his comfort zone to look at a world he’s not directly a part of.

In telling the story of the Crips and Bloods, Peralta goes back to the Watts riots of 1965 which let out the anger African-Americans were feeling at the time towards not only their status in America but the brutality the police put on them daily. Segueing to the popularity of black power organizations during the time, gangs in South Central L.A. were at an all time low. But gradually long prison sentences or death to most of the positive black leaders by the end of the civil rights movement leads to the creation of the Crips which quickly attracts the disconnected youth. The Bloods quickly followed as a rival gang leading to decades of a blue (Crips) and red (Bloods) turf war in South Central with little intervention from the state on how to clean it up.

Peralta examines the rise of the Crips and Bloods through interviewing former or current members of the gangs, showing moving still photos, ghastly archival footage of murder scenes and speaking to mothers who’ve lost their children to gang violence. But Made in America, narrated by Forest Whitaker, isn’t so much an expose on gang life as it is an optimistic story of hope. Rather than shocking the audience with the access he can get with the gangs or document initiations or drive-bys, Peralta portrays gang life as not a choice but an all-consuming inevitability for young black males in South Central. The sliver lining in all of this is that it seems gang members who are now middle-aged have seen their errors and are trying to portray a better environment for today’s youth, but has the gang mentality become too deep-seeded in the neighborhoods? Peralta doesn’t have the answers or attempts to act like he does, he lays out the facts in the hope that change can come on the streets as well as making the audience better understand the reasoning behind joining a gang.

In stores this week through Docurama, the disc also includes a making of feature as well as deleted scenes and interviews with gang-friendly rappers Snoop Dogg and Lil Wayne.