How To Complete Post-Production Quickly to Meet a Festival Deadline: The Making of Joe Begos’ The Mind’s Eye 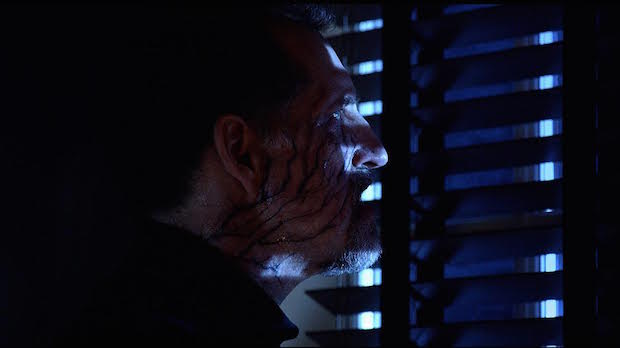 In order to make the submission deadline for the Toronto International Film Festival, writer/director Joe Begos and producer/editor Josh Ethier had a locked cut of The Mind’s Eye seven weeks into the editing; the effort paid off as the psychokinetic thriller is getting a World Premiere as part of Midnight Madness programme. The cinematic tale features Zack Connors (Graham Skipper) attempting to use his special abilities to prevent the mysterious Dr. Slovak from descending into a psychic rage. “Joe is a visual director who shoots and operates on his own films,” explains Ethier, who has collaborated with Begos ever since they were teenagers. “In addition to the usual producer duties, I’m also on monitor, which is a rare opportunity as an editor to be on-set and to weigh in on the actual shooting. As a result, most of the more complicated sequences come together quickly in editing.”

“On-set I had an assistant transcoding, logging, and setting up the project,” says Ethier, who headed back to Los Angeles after the conclusion of the principal photography to start the editing with Joe Begos. “Having the director in the room during the initial discovery period when you’re watching it back for the first time can be stressful for some editors, but I’m happy to expedite the process and dive in, creatively.” The editing software of choice was Avid Media Composer. “The 8.3 update allowed me to do a 4K conform of my timelines, which ended up saving time and money once we got to the DI stage.” A couple of different digital cameras were utilized. “The film was shot mainly on a RED DRAGON, but we did have a SCARLET for B and C camera on stunt/effects days. Thankfully, the RED codec is so versatile, that it was never a problem for even an unexperienced assistant to get the footage setup.”

“The first step is watching all the dailies for the scene, noting lines, moments, and looks that we want to include,” states Ethier. “I’ve always cut features front to back, so the context of the previous scenes or character arcs is always helpful when doing an assembly; then a first pass at the edit, a sound pass, and if it calls for it, a music pass. In both Almost Human and The Mind’s Eye, there are multiple sequences that are crosscutting between multiple characters and sometimes multiple locations; in those situations I’ll hold off on sound and music until the sequence as a whole has a first pass.” The initial sequence of scenes stayed essentially intact. “There wasn’t a lot of shifting in The Mind’s Eye. It was written in a straightforward fashion, almost like a chase film. After our first pass was done, we tried to isolate specific areas that were affecting overall pacing, and find interesting ways to trim them, without losing any key information.”

Along with assembling the imagery, Ethier is involved with the sound team. “When I’m editing, I build backgrounds, do microphone selection for dialogue, and start the sound effects editing/design,” says Victor Bouzi, who has been handling the production sound mixing for Ethier and Begos’ movies ever since they moved to Los Angeles seven years ago. “The next member we brought on was sound designer Graham Reznick, whom Joe and I spotted the film with to discuss individual design for each character, and any other sequences that would be relying heavily on design. Doing such a robust temp in the Avid helps to cut down on a lot of the usual communication, which is helpful on an advanced post schedule. Composer Steve Moore had sent us some of his earlier scores which we were able to use in our temp score; they helped us to move quickly once we started sending him locked reels. Steve quickly got the tone that Joe was going for, and the music matches perfectly with the cinematography and pacing of the film.”

Suspense had to be maintained throughout the movie. “From the moment The Mind’s Eye was written, it was designed to take off in the opening and push relentlessly to the end,” notes Josh Ethier. “From an editorial standpoint, this means trimming or losing anything that stands in the way of that push. If any information becomes redundant, we’d look to compress it. In action sequences, I’d try to make sure each new shot had necessary action or movement, and be looking to make everything as exciting [but also as clear] as possible. Music and sound plays a big part; we lay down as much as we can in the edit to make sure that each moment is working before it gets to the next person down the chain.” A particular scene transition stands out. “There’s a home invasion sequence in the second act that features five different characters spread around a house, with lots of stunt and effects work. The entire thing relies heavily on every single department, prep to post, and is one of the highlights of the film.”

“Both Almost Human [2013] and The Mind’s Eye used completely practical effects on-set, so the only visual effects in the film were wire/rig/stunt pad removal,” says Ethier. “Although, in a film that features telekinetic action, that list of shots can get extensive. We ended up splitting the shots between two effects artists, with me handling a couple of the easier wire removals.compositing myself. We used the same DI house that we used on Almost Human, so there was a relationship already in place, and the material handoff was painless. Joe wanted to push the film as far as he could in the DI, and thanks to the team at Cognition, was very successful,” Ethier observes. “It’s a film that’s rooted in the science fiction films from the ’80s, seen through the lens of the revenge films of the 70’s, shot in one of the snowiest, coldest winters in New England’s recent history. We’re making the type of films that we would’ve been excited about as kids, and hopefully that shows in the films themselves.”