“A Documentarian Needs to be Disarming”: Khalik Allah on Field Niggas 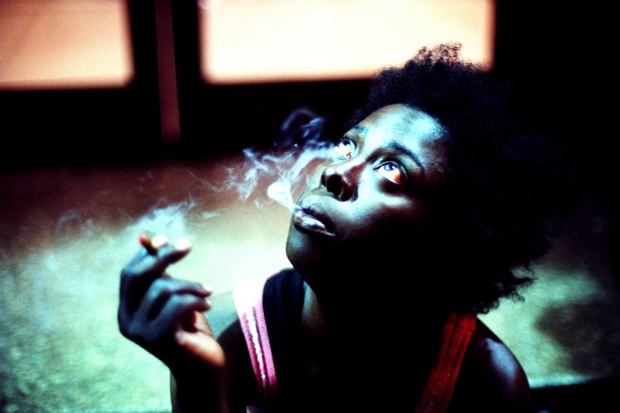 Filmed throughout the summer of 2014 on the warm, sweat-drenched streets of Harlem (between 125th Street and Lexington Avenue to be exact), Khalik Allah’s Field Niggas is an all-out sensory experience, gonzo journalism that’s a visceral call-to-action. Placing himself amongst the socially ignored and maligned inhabitants of Harlem’s famous cross streets, Allah takes a nonlugubrious approach to documenting the men and women who frequent the area and suffer from poverty, addiction and a hunger to have their voices heard. Both stylistically and narratively innovative — the subjects’ stories often told via non-sync sound and invasive close-ups  — Field Niggas’ attention-getting title is only the tip of the iceberg: “125th is a prison without the gates” one character remarks, and the very real implications of that statement echo throughout.

In advance of the film opening this Friday for a weeklong theatrical run in IFP Screen Forward, I spoke with Allah about his film’s political implications, his particular use of non-sync sound and the most appropriate way to film police in public.

Filmmaker: What originally brought you to 125th Street and Lexington Avenue in Harlem?

Allah: I used to avoid it. I began to frequent Harlem when I was 14. I was coming in for knowledge. I needed to resurrect my decaying adolescent mind. I was failing out of school and heading nowhere fast. 125th and Lex is a corner I used to see, and yet because of the police presence and the drug usage, I would stand back. I wasn’t an artist then, only a seeker of knowledge, so it’s ironic that this corner that I used to avoid became the common denominator in my work.

Filmmaker: The film is set during the witching hours, during which cast of characters encouraged to have their voices heard. What made you shoot exclusively in the evening? How many hours did you spend there each night?

Allah: I shot for two or three hours a night. Stylistically, I made the film to reflect my photography’s aesthetic, wanting each frame to look like a still of mine. I prefer the night. It’s more nuanced and I’m attracted to the elements of danger it contains. I want to take people where they don’t want to go and then make them love that I took them there. I want to show them that there’s nothing to fear.

Filmmaker: As felt throughout the film, 125th Street is a place the viewer travels to, an island unto itself that we are lucky enough to leave while the less fortunate remain stationary. This is made literal by the frequent shots of you in the passenger seat of a car traveling to the location of your subjects. It’s both a distancing effect and a way to bring the viewer in. What made you include those inside-the-car shots?

Allah: Those weren’t from the passenger seat. I shot that handheld while I was driving. I’m dangerous, man! And I did it for exactly that reason, to emphasize my own coming-and-going and to help the viewer feel as if they were traveling too. I wanted the audience to feel as if they were participating. The film is alive. Some films are dead and make the audience feel the same way.

Filmmaker: What made you choose to shoot with non-sync sound? Your footage also appears to be slowed down throughout, so the viewer is being presented with images and then given the task of connecting the voices to the faces on screen.

Allah: The use of non-sync sound and slow motion was an aesthetic choice that also serves as an invitation for the viewer to participate. It causes the viewer to imagine and visualize, and it’s similar to the way one would process reading a book. The slow-motion helps to facilitate a dreamlike landscape. It offers another perspective on the inescapable guttural reality that’s present in the film. Slow-motion is useful in such a fast-paced environment. Showing it slowed down helps extract the subtle beauty that otherwise is easily overlooked.

Filmmaker: What role did your audio editor, Josh Furey, plan in shaping the narrative?

Allah: Josh Furey is an awesome music producer and audio engineer. He was responsible for cleaning-up and balancing the film’s audio. The crispness of the film’s sound is largely attributed to him. No produced music was used in the film — a 1950s prison chain-gang can instead be heard throughout. Josh was responsible for the placement of that chain-gang audio. Once he laid it in, I didn’t ask for any changes. He also did the title sequences for the film. He’s a very versatile and talented artist. We’ve worked together for years by email and only recently had our very first phone conversation.

Filmmaker: Speaking of the chain-gang audio, where did the inspiration for that come from?

Allah: It came from the title of the film, and I really wanted something to represent Field Niggas in a very real way.

Filmmaker: Did you use any external lighting equipment? I’ve seen the film twice now and it appears as though the film is lit exclusively via ambient light.

Allah: No external lighting was present, and so I used everything at my disposal to light a scene, whether it be a passing ambulance, police sirens, store-fronts or a lamppost. With my photography I’m shooting 160 ISO film at nighttime. That film stock is meant for daylight, so it causes even the film to struggle to render an exposure. Struggle is echoed throughout my work, a struggle for light, and that’s what my early life has been about.

Filmmaker: There are several times throughout the film where the NYPD seem compliant with being filmed by your camera (at one point, it appears as though they stand up straight, blank-faced, and pose for you). This is in stark contrast to the indecencies we see the police commit in the media these days, ready to confiscate a recording device as soon as they detect one. Were they comfortable with being filmed?

Allah: A documentarian needs to be disarming. My approach was basic: I approached the officers fearlessly. Most of their job involves fear, so I decided to come to them with love. They had seen me before. They knew my camera. When I introduced myself to them they had already been interested in what I do and I told them about my work and asked for their permission to be in it. I could have shot them without permission but it wouldn’t have been as intimate. Some officers said no, but most agreed, albeit with one stipulation: they wouldn’t speak into our microphone. Personally I felt they didn’t want to incriminate themselves.

Filmmaker: As the film progresses, you maintain a removed political stance. One example of this is when you note that you love the police as much as you do the residents you’re documenting. Do you feel it’s possible to show these images without your audience coming to a conclusion of some kind? The film finds your characters at a political crossroads, one only heightened (as the film notes) by the unfortunate death of Eric Garner specifically and police brutality in general.

Allah: The political themes are in there but I downplayed them. This is more of a spiritual film. We don’t understand what trust can do for us and we don’t understand how suspicion undermines the integrity of everyone.

While I’m aware of what many police have done and continue to do across America, psychologically we are very vast, and so I wouldn’t make the mistake of defining anyone by their behavior. The power is in me to free them from their behavior by seeing them differently. I focus on what I want to see and forgive the rest. I respect the audience enough to give them space to feel how they want to. The subjects within the film are vocal about their own feelings towards the police. I’ve learned that, personally speaking, vision can give me more than judgment, even when I believe I know enough to judge. Jesus never hated Judas. He thought of him as a brother, and even if the world hates Judas, The Christ still loves him. That’s the whole lesson.

Filmmaker: The use of K2 on 125th Street has been a subject of much ink being spilled recently in The New York Times and other publications. Your film, however, seeks to put a face and a voice to the users; their personal history matters so much more than the drug they’ve become victim to. Are you turned off at all by the K2 coverage that now appears at a more rapid rate?

Allah: I didn’t like most of the coverage. It’s just another story for most publications. I respect how the Times wrote about it and I feel they were aware of the subject thanks to my film. They interviewed me four months before they ran their K2 piece. K2 is so prevalent in Field Niggas, and as my work has gained more recognition and attention, I see more and more articles about it. I think the film has had an impact, although that wasn’t my intention.

Filmmaker: I recall you mentioning a festival that wished to give an award to Field Niggas, but only if its title were changed to something less offensive. Am I remembering that story correctly?

Allah: Yes, the Sarasota Film Festival was a tremendous experience and I hope to go back with other films in the future. This is what happened: The last night of the festival the head of programming told me that we had to talk. I said, “What’s up?” He told me that I had won an award but that the Opera House, where the award ceremony was taking place, didn’t want to say the title of the film on their stage. He asked me if it was alright to give the award to Khalik Allah instead of the film’s title, Field Niggas. I respected what he said, and I told him it’s fine. We did this because you would have had people who don’t know me or have any context of the film thinking that the Opera House is a racist organization because they said “nigga.” The title was creative licensing on my part, but really I’m just a rebel.