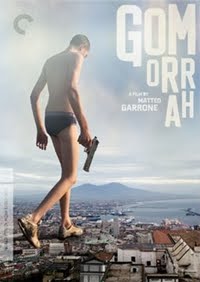 Matteo Garrone’s masterwork Gomorrah is notable for what it is not. There is no macho camaraderie amongst thugs in social clubs as seen on The Sopranos. And there is nothing romantic about ‘the life’ of mobsters. While American audiences have been accustomed to the portrayal of gangsters having facile access to money, power and women with seeming impunity, they will be treated to a coarser, realistic depiction of the Naples crime syndicate known as the Camorra. Based on the eponymously named novel by Roberto Saviano, Garrone’s film bears more than a passing resemblance to socio-economic and cultural milieu of Luis Bunuel’s Los Olvidados and Fernando Meirelles’s City of God, where squalor, death and hopelessness reign with no end in sight.

Five non-interrelated storylines take place in a colorless, prison-like Neapolitan housing project, itself a fiefdom of rival Camorra gangs. There is Pasquale, the fashion tailor (Salvatore Cantalupo), two young wannabes, Ciro and Marco (Ciro Petrone and Marco Macor), Franco, the waste management specialist (Toni Servillo), Don Ciro, the mob-bagman (Gianfelice Imparato) and Toto, the small associate (Salvatore Abruzzese). Each attempts to get on with their lives, knowing full well, there is no escaping from the tentacles of the Camorra, which influences every single one of their choices. None of the characters will have serendipitous encounters with each other and none can run to the government, which is noticeably absent, as is perhaps God in this part of the world. Each accepts as a fact of life, the Camorra as omnipresent and omnipotent. Either work with evil or be eliminated. Gomorrah focuses on the attempts of the victims to do what they must despite it all. Wider American audiences may not take to the lack of Hollywood flash in the film, but it will give them pause to think. They will think about the social conditions in which so many people live and shame the government into taking decisive action against organized crime.

The most fascinating of the DVD extras is the 60-minute segment entitled Five Stories, providing the behind scenes making of documentary for each of the five storylines. The doc’s camera sits back and records Garrone’s interaction with the cast, many of whom come from the slums depicted in the movie. Behind the camera, we can see Garrone giving many liberties to his actors to improvise both their dialogue and movements and to go with what feels real. Director Garrone cast for people deeply rooted to Naples and even according to their physiological appearances of the parts they played. But it is in casting non-professional actors, some of whom have more than a passing knowledge of organized crime, that gives Gomorrah its power. Take for example the most interesting segment of the Five Stories involving Ciro and Marco, the two young wannabes. They aspire to be like Tony Montana, naively thinking they can be independent of the Camorra and end up stealing a large cache of automatic weapons from one of the local crime factions. The man, from whom they steal, is in fact a real Camorra gangster, played by the boorish Giovanni Venosa, who would later be arrested after the film wrapped. The director reassures Ciro and Marco that the mobsters for the penultimate shot of the film won’t really hurt them. After all, these aren’t just actors.

Other extras include various deleted scenes along with interviews with author Roberto Saviano describing his first hand reporting experiences while living in the northern ghettos of Naples where the stories took place. Now he lives in the Witness Protection Program for having named names. One can only hope someone will take notice of this tragedy.

Gomorrah will be released by Criterion Collection this week.