Anomalisa, Stop-Motion Animation and How 3D Printers are Changing Filmmaking 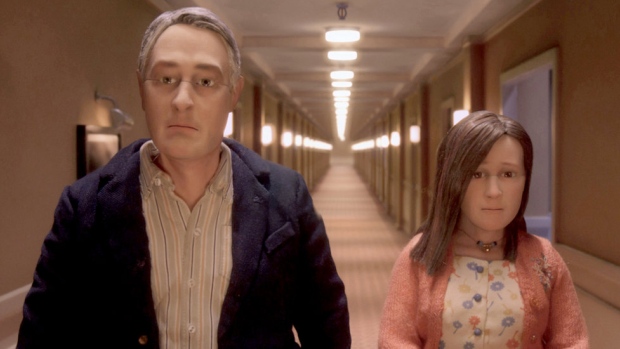 by Christianne Hedtke
in Filmmaking, Production
on Jan 11, 2016

Remember stop-motion, that venerable technique of animated films ranging from old-time children’s classics by Rankin/Bass to sword-and-sandals epics by Ray Harryhausen? Given the success of Pixar’s movies, Minions and other computer-animated features, you might have thought that 2D, hand-drawn, and traditional stop-motion has been relegated to the dust bin of history. Well, if you are a fan of these styles, don’t lose hope just yet. Opening just before the New Year was Charlie Kaufman’s much-anticipated directorial follow up to 2008’s Synecdoche, New York, Anomalisa. Directed by Kaufman and Duke Johnson, it’s being touted for its unique amalgam of animation processes that combine puppetry with CG, and the use of 3D-printed stop-motion animation.

“3D-printing” is one of those buzz phrases that’s been flying around the last few years, “disrupting” this and that and creating new possibilities and problems. But apart from fears that people are going to start printing their own guns or hopes that you’ll one day be able to print yourself a pizza, in all likelihood you probably haven’t seen this innovation affect your life in any palpable way. In which case, you might be surprised to learn that 3D-printing has become a major element in stop-motion animation over the past few years, beginning with its use in LAIKA Entertainment’s 2012 feature, ParaNorman.

LAIKA, an Oregon-based animation studio that’s also responsible for the stop-motion features Coraline (2009) and The Boxtrolls (2014), has been leading the charge in bringing the 21st century innovation of 3D printing to the 19th-century process of stop-motion animation. By utilizing so-called “replacement animation,” i.e. swapping out limbs and facial expressions on a Mr. Potatohead-like base structure to create the illusion of motion, LAIKA has revolutionized the process by employing 3D printers to create these various facial expressions and limbs in motion. So 3D-printing provides the quick-fire solution to the painstaking tedium that stop-motion required in the past, right? Not even close.

To create their signature polished look and expressive characters using 3D printers, LAIKA typically models its characters by hand in real materials. Those models are then scanned by a 3D-scanner and remodeled digitally to make sure the three-dimensional “meshes” are suited to 3D printing. The entire animation — including walk cycles, facial expressions and speech patterns — are planned and perfected digitally before they’re ever printed. To achieve the maximum breadth of facial expressions, the upper and lower parts of characters’ faces are printed separately, so eyes and mouths can be mixed and matched to create ever more combinations of expressions, with a seam running between the top and bottom of the face that’s eventually erased digitally. And, since 3D prints have subtle color variations in each iteration, the entire image is cleaned up and color-corrected digitally. That means the entire process oscillates between the physical and digital realms multiple times before the final image is achieved. It’s not exactly a streamlined process.

Not to mention that for a major studio undertaking like The Boxtrolls, the main character, Eggs, had something like a million potential facial expressions, achieved through a process known as “rapid prototyping,” a system LAIKA has garnered accolades for pioneering. Rapid prototyping results in tens of thousands of 3D print-outs that somehow need to be not only organized and stored, but due to the horizontal layering process of 3D printing that can leave striations on a finished model, and the aforementioned deviations in color, each individual piece requires hand sanding and painting.

So, 3D-printed animation is obviously just as complex, time-consuming, and expensive to produce as other forms of animation. Given that it’s not necessarily cheaper or faster, why go to all the trouble? The most obvious answer is the most intangible, but it points to the central goal of all media in the information age: authenticity. Despite the sweeping advances we’ve seen in computer generated animation, it still (and might always) lack that certain tactile quality that allows us to relate to the images on a physical level. No matter how many programs the computer wizards design to make CGI emulate the physical world, nothing can compare to the look of real light reflecting off of physical forms, or the feeling that you could just reach out and touch the characters you see on screen (because you could.)

But beyond the issue of tactility, audiences will always want content that just plain looks different. Anomalisa is one such film that benefits from standing out, and having some understanding of the replacement animation 3D-printing process will shed new light on an interpretation of Kaufman’s film.

In his world, the protagonist, Michael Stone (voiced by David Thewlis), is surrounded by people who are all carbon copies of one another. They all share identical faces and identical voices (with one exception, all are performed by Tom Noonan) whether they be man, woman, child, or adult. When Stone discovers a person with a unique face and voice – Lisa (Jennifer Jason Leigh) – she is the anomaly he feels compelled to make a connection with. Interestingly, Anomalisa took no pains to hide its brushstrokes, leaving all the evidence of its 3D-printed origins, including the aforementioned striations, the color deviations, and even the seam between the eyes and lower face of the characters remains. Apparently, nothing was erased digitally, in a self-referential move that draws attention to the film’s themes of mass-production, uniformity, and the lack of unique human connection the protagonist struggles against.

But that uniformity is perhaps the most practical quality 3D-printing can lend the stop-motion animator. The modeling and printing process lends a certain degree of control, allowing the animator to plan out how the final version is going to look before it’s even made. Andrew Thomas of the New York-based 3D-printing company, Shapeways, says, “You can make a hundred different versions before you ever print it, and you can hit ‘undo’, which alone is pretty valuable to an artist.”

If you’re interested in giving it a whirl, a company like Shapeways, which uses the same 3D printers as LAIKA, can enable you to try your hand at 3D printing and animation. In this case, the artist designs a model digitally and sends it off to Shapeways, who prints it, cleans it up, and ships it back to you. But if you’re looking for a more hands-on approach, there are consumer-grade desktop 3D printers from Formlabs and Makerbot, which, after an initial investment of about $3,000, their only costs are that of the resin you use to print and time.

Obviously, you’re not going to start off with the rapid prototyping method, but if you’re unsure of where to begin with 3D-printed animation, take some inspiration from artists like Raymond McCarthy Bergeron, who are breathing new life into yet another 19th century process through 3d-printing: zoetropes. (Check out Bergeron’s short film, Re-Belief and other 3D-printed zoetropes) A zoetrope is an inexpensive way to experiment, since you’re only paying to print one piece at a time, but if you’re still pining to try out storytelling in this medium but you don’t have a ton of money to spend, be as efficient as possible in your design so you can re-use as many parts as possible in various combinations, and be smart about what materials you use (i.e. stick to color sandstone or plastics, and don’t go printing your models in gold, duh!)

Finally, if you want to experiment with 3D printing in your filmmaking, but aren’t ready to go the distance with animation, consider using it in your production design. Even films like Mad Max: Fury Road and the newest installments of the Star Wars franchise have props that were 3D-printed. It’s also a great way to make models and miniatures for lo-fi SFX. And as 3D printing tools get easier to use and materials grow less expensive, expect 3D printed animation to gain bigger footholds on both the commercial and indie sides of the entertainment industry. Happy printing!