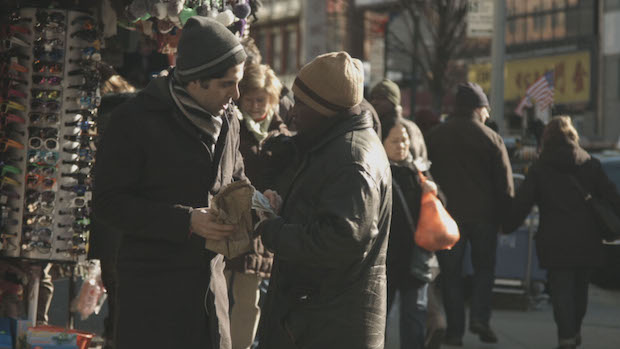 Hailing from NYU’s Tisch School of the Arts, Sheldon Chau has served as a cinematographer on 30 short films and two features since 2011. For Jungle, he collaborates with fellow NYU student Asantewaa Prempeh to tell the story of two Senegalese street vendors in New York City. Below, Chau discusses the everyday obstacles of shooting in the concrete jungle of NYC.

Chau: The director Asantewaa Prempeh (Sante) and I have been good friends for over a year since we’ve met and collaborated during our time at NYU. I’m sure there were others in mind when Sante decided to move forward with this project, but I think my experience and comfort level in shooting a run-and-gun style with very little crew and a small camera factored in. It was also about time we made a film together as a director-cinematographer combo!

Chau: The film is about two Senegalese vendors working and hustling on the streets of Chinatown, Manhattan, so in terms of cinematography, the primary goal was to be present right alongside them and be on the ground with these characters as they went about their lives. Sante encouraged a ninja-like approach to the camerawork – we wanted it to feel invisible but didn’t want to call attention to it; we wanted the camera to literally be the audience, to transport viewers by adopting a somewhat voyeuristic approach. We also wanted to create a distinct liveliness to the grittier streets of Chinatown versus the more polished area of Midtown 5th Avenue – the main two locations in the film – which therefore led to two different color palettes. We also did a lot of long takes combined with unconventional framing and finished some scenes with very little coverage by heavily utilizing a zoom lens (going from mediums to CUs and back). We were able to move quickly this way as many moments were combined into a single shot. In the end, our approach worked as the actors were able to perform freely with no marks and little stoppage.

Chau: Sante was keen on not approaching this film in any conventional matter, which I appreciated a whole lot. The challenge is part of what makes it fun! We looked at the work of Xavier Dolan, particularly some moments in Laurence Anyways (2012) to not necessarily mimic but to study how he does things that are outside the box. We also looked at Andrew Dosunmu’s Mother of George (2013) to see how he and cinematographer Bradford Young utilize color to enhance the story. And finally, a big reference in terms of our visual approach was the American version of The Office. Sante loved how fluid the camera was so it was definitely something I looked into in prepping for this – observing how they use their zooms, how they frame, and especially the timing of when they reframe.

Chau: The biggest challenge was definitely shooting in an area of the city inhabited by people who were not necessarily thrilled to be captured on camera. It was one of those things where even though we had a permit to shoot on those streets, it was a matter of coming to terms with those who occupy them (basically, the actual vendors that were working, and whom our actors were portraying). There were more than a few times where someone came to threaten us and one specific incident where the thought of my camera being taken away and smashed very much crossed my mind! It makes sense when I place myself in their shoes, but hopefully they’ll be able to see that our film was not exploiting them in any way.

Chau: We shot on the Blackmagic Production Camera 4K. We chose it because 1) I owned it and hence we can save money, and 2) the camera was small enough – and actually perfect – for a guerilla-type run-and-gun style. We used the Canon L series lenses I owned – primarily the 24-105mm f/4.0L, which was our workhorse, the 16-35mm f/2.8L and the 85mm f/1.2L. We had no camera department, so the rig had to be easy enough to me to operate on my own and also quick enough for me to stow away if things got testy. I really do love the look of the camera when in proper exposure and also its ease of use; for the price, it is hard to beat!

Chau: Our approach, for obvious reasons, were to use natural and available light. I have no problem with that though as it’s one of my favorite things. The challenge is to find locations that worked with the angle of the sun. Lots of our scenes occur underneath scaffolding, so it’s also key to shoot those scenes during a time in which the background isn’t hit by hard sunlight, which would blow out the image. I love the way light falls off on darker skin, so for me, it was to embrace shadows and keep the contrast on our actors’ faces — angling the positioning of the actors in accordance to the sun and likewise finding the right frame to make it look best. For the night scenes on 5th Ave, it was essential that we find a location with bright lights coming from the stores. We lucked out in finding a block with Christmas lights decorated on trees, which provided great fill, and lots of spill coming from the building side (thank you, H&M!).

Filmmaker: What was the most difficult scene to realize and why? And how did you do it? Finally, describe the finishing of the film. How much of your look was “baked in” versus realized in the DI?

Chau: The most difficult scene for me was the night exterior in which a pivotal moment occurs between our two lead characters. There was movement involved, and the scene dealt a lot with distance, looks, and connection; we had to get the right eyeline, the right beats, while having the location and the production design be believable. The actors also had to operate within a general area where the light was hitting or else it’d be too dark. We didn’t have a big budget, but this character had to be packing up his booth in the middle of 5th Ave. Lots of things came together at the right time and I think the scene was a success – a friendly merchant kindly allowed us to film our actors packing up his own booth, which then looked convincing on camera – amazing how things can work out sometimes. The fact that it was also about 30 degrees and colder with wind chill throughout the shoot was also quite difficult! We shot a flat look out of the Blackmagic, then graded in Da Vinci Resolve 11. It’s impressive how flexible the image is in color grading; we’ve even had some people think our little short was shot on film!