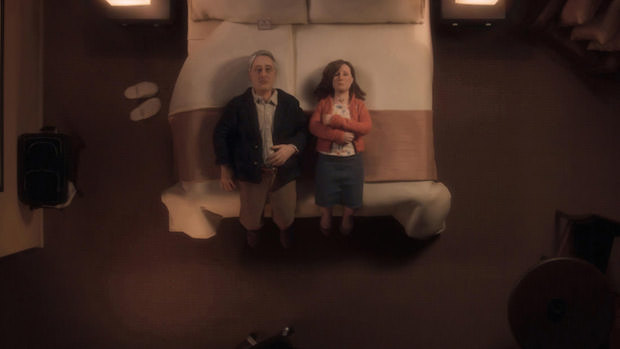 Joe Passarelli has spent the last decade serving as a cinematographer and electrician on more than 30 shorts, features and TV series. In 2015, he had his breakout film with Anomalisa, the long-awaited stop-motion feature written and co-directed by Charlie Kaufman. Below, Passarelli speaks with Filmmaker about the film’s singular visual design, which seeks to capture the mood of its troubled protagonist Michael Stone. This interview was conducted in conjunction with “Behind the Scenes of Anomalisa,” a panel at the 2016 Sundance Film Festival.

Passarelli: The film’s co-director Duke Johnson and I are long-time collaborators. We made our thesis film together at the American Film Institute (AFI). Once he’d made a couple television shows in stop motion, he invited me to shoot season 2 of Mary Shelley’s Frankenhole, the first TV series Starburns Industries (Anomalisa’s production company) produced. After that, Duke told me about the potential to do a Charlie Kaufman script in stop motion – if we could raise money. Duke and I shot the Kickstarter pitch together and once some money was raised, we started pre-production conversations. Charlie liked that I mainly worked in live action, but also had some stop motion experience.

Passarelli: My artistic goals for Anomalisa was to help create a realistic world for the characters to live in, but also try to capture the mood that the main character Michael was going through. It is a dark and dramatic story and I wanted the look to enhance that. I felt in order to create a realistic world there needed to be extreme detail to all the lighting. How practical lighting reacts in a real environment can be very complex sometime and I wanted some of those locations within the hotel to have that complexity. Also how light reacts to a real face is even more complex. Light falls onto a face in so many ways in reality, lights are reflected in their eyes and the way the light wraps on someone’s face can really dictate a mood. I also wanted to always drive the viewer’s eye to what they should be focusing on, which in a story like this is the main character, Michael Stone.

Passarelli: There were numerous films, paintings, and pictures we all looked at starting very early in preproduction. There was always a clear vision that all the references had, looking at our reference board in preproduction you could see the look of Anomalisa. The films we talked about were older films from the ’60s-’80s. We looked at films like Vincent Minnelli’s Some Came Running, Stanley Kubrick’s Eyes Wide Shut and The Shining. Adrian Lyne is another director’s films that we discussed [concerning] black levels and mood. As we were testing lighting on the face plates we looked at Rembrandt style portraits.

Passarelli: The biggest challenges were the scale of the sets and allowing space for the animator to have access to the puppets to animate. Some of the set like the hotel room was 3’x5’ so even with lights we built to be small, space ran out quick. If the hotel room had a camera move, it meant even less room with the motion control unit with track taking up more space. Sometimes we needed to get light in specific spots in order to reflect in the puppets eyes. That is usually where the animator would prefer to stand so they can be in the best spot to get the performance they are after. We would always collaborate and find a solution. For the shot of Lisa reflected in Michael’s eye, the camera lens was almost touching the puppet’s face. The made it extremely difficult to light his face and also not flare the lens at the same time.

Passarelli: We shot Anomalisa using 18 Canon 7D cameras. Our lenses included Nikon zoom lenses (17-35mm) (24-85mm), Nikon 60mm macro, Pentax 45mm. The animation software the animators prefer to use in stop motion is called Dragonframe. It is designed to work best with Canon cameras. The 7Ds were the best choice for us because the slightly smaller chip than the 5D allows for more death of field, which is helpful to have in filming miniatures. Stop motion is done one still image at a time, so we were shooting Canon Raw still images. The size of the 7D body and the size of the chip were a good fit for our scale. We needed to use still lenses because of our budget and we needed to make sure they had a manual aperture ring or the image would flicker, so we were able to acquire quite a few Nikon lenses around town.

Passarelli: My approach to lighting Anomalisa was to make sure we were always letting the main characters state of mind dictate the lighting. Again, it is a dramatic piece, so the lighting needed to complement that. The look we always talked about was using soft directional light, which in miniatures is difficult because the smaller a light gets, the harder it gets, so we needed to bring lights as close to set as we could, which sometimes required building smaller versions of lights. Once we got the lights looking nice and soft up close, I saw the real challenge of lighting this film, which was controlling and flagging the lights.

The lighting was very specific to the blocking and where Michael was going to be in each environment. Each set or new scene would have a specific feel for the state of emotion Michael is experiencing. Even the hotel room was lit differently once he arrives with Lisa. There it is warmer, more inviting and romantic than when he first arrives in the room and calls his wife and Bella. The goal was always to have Michael’s state of mind dictate the lighting for each scene.

For the breakfast scene when Lisa changes from a unique individual to one of the world’s characters, we wanted to have the sun glare into Michael’s eyes as he is talking with Lisa as she changes. With that in mind, all the daytime lighting thus needed to have areas of hard sunlight coming in, with the soft glow of the daylight outside.

Passarelli: The most difficult scene was the time-lapse which happens right after Michael and Lisa’s intimate night and transitions into the dream sequence, having to create a time-lapse sunrise shot of a miniature city scape that looked believable and moody.

A lot of pre-planning went into the city. Creating a foggy night in camera was the goal. From the sky in the background, to the sun, the moon, the overhead sky light and the lights inside the buildings on the streets, all that was done in camera, so each row of buildings were divided by different types of nets (silks, tule and black silks), the sun and moon were on motion control. Overhead lights were set for daylight and night and everything including moco and lighting was fed through a DMX program to change the time of day via a simple push of a button.

No one really knew what this was going to look like. Most times in stop-motion, a painter comes in and paints a sky backdrop, or its green screened and then created digitally. We took great care to do as much as possible in camera to stick with the feel of the movie. We studied time-lapse video and tried to put as much detail as we could. By the time we set it up, the result was hugely anticipated. We had done a lot of testing, so we knew it was going to work, but we ended up exceeding our goal. The list of issues that came up while we were lighting it was ridiculously long. There were hundreds of small LED lights and small little lights called grain of wheat bulbs, fiber optics and nets squeezed in between rows of buildings, we had tiny fiber optics dipped in red paint to look like radio towers. By the time we shot, if one flag was moved or any lights were off, the illusion would be lost.

We used a lot of diffusion in the camera as well, I had pantyhose behind the lens and a couple diffusion filters on the lens.

Passarelli: The look we set out for was always very clear from pre-production. Also, because of the controlled nature of stop motion, longevity of the project, and visual effects needed to clean up the animation and comp in areas of the frame when we removed walls, we needed to shoot it as close to the finished product as we could. The sets in stop motion need to be so controlled, because if any light of any sort changes near the set it would cause flicker in the final shot. I tried to maintain as much control on set in terms of everything including color, black levels, and highlights. I used nets behind the lens in several scenes and that dictated the highlights in a lot of the shots, there was no room to bring it up or down. This type of control was great because I was able to dial up or down the lights on set to have just the right amount of roll off in the highlights.

In stop motion it is sometime necessary to shoot a pass of just the set lit completely without the puppet, then when the animator comes into animate we remove a wall and drop in a green screen further away so the animator has access to the puppet. This meant all the elements would need to look exactly the same, so the visual effects team could very easily composite back in the missing walls or ceilings. Derek Smith (VFX Supervisor) and his team did an amazing job of keeping any comps they did consistent with the look we set on the stages.

Setting the look in camera did allow Charlie, Duke, and myself the opportunity to take full advantage of a six day color timing session at Light Iron. Ian Vertovek was the colorist and did a really great job. Watching the film as one piece in the DI suite with all the visual effects completed and the beautiful score and sound mix did open up some creative ideas that added to the look of a few scenes.