DP Nick Higgins on the Nearly Eight Hour Documentary O.J.: Made in America 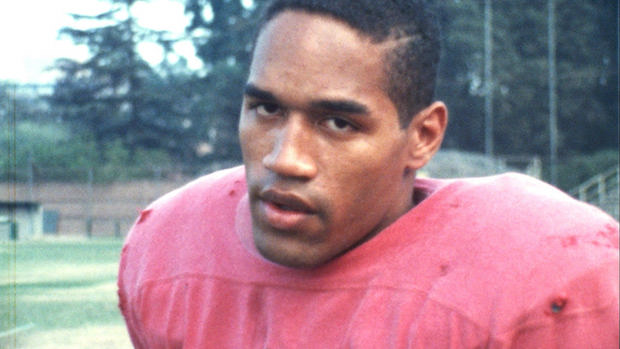 The producers of ESPN’s acclaimed 30-for-30 documentary series deliver a nearly eight-hour opus with O.J.: Made in America. The film was shot by Nick Higgins, a seasoned cinematographer behind more than 30 non-fiction shorts and features. Below, Higgins speaks to the visual ideas of a film that’s 90 percent talking heads. He also discusses shooting “eight hour mega monster marathon interviews,” his love of classical portraits and working with a crew of two.

Higgins: In the last couple of years I have shot on a few films for ESPN’s 30 for 30 series including The 99ers and The Coach so my name was known in that world. I also shot alongside NY based DP Ronan Killeen on a production called The Years of Living Dangerously. Ronan has worked extensively with Director Ezra Edelman who was looking for an LA based DP for this production. Ronan hails from Ireland and I am from Scotland so in this case the Celtic cousin network worked in my favour. Usually the only time Scottish and Irish people agree on anything is in their support for anyone that’s playing football against England.

Higgins: This was an interview-based production and because of the subject matter they were always going to be intense. Director Ezra Edelman is a walking, talking encyclopedia on the whole O.J. story and more interestingly the race relations in LA in the five decades leading up to the murders and the trials. Ezra was keen for the interviews to be completely uninterrupted, consistent in terms of lighting, and he would conduct these intense conversations for typically five or six hours straight. Given that most of these characters would have preferred not to talk about this chapter in their lives, it was fascinating to watch them open up and get in to these massive sessions. This was only possible by creating an atmosphere that was as low key as humanly possible. This was the true creative challenge of this film.

Typically when I shoot interviews in real locations I employ some element of available light, whether it be a sliver of a window in the background or allowing the windows to fill in the back of the room. Over a three-to-six hour period there’s basically no way to employ almost any element of natural light without the shot changing dramatically so we had to work out ways to block out all the light and keep things consistent. For any fiction filmmakers reading this it sounds super easy to do this, but we didn’t have a gaffer with a grip truck and lots of hardware. We had myself, my trusty assistant (most often stellar AC David Smoler) and my usual interview light kit that fits neatly into the back of my Jeep Patriot. Over the course of the year of this production my skills at this consistent look were honed and the amount of duvetin I carry in my kit has quadrupled.

Higgins: When I travel I try and pop into any art gallery that has classic oil painting portraits. I like to try and recreate the quality of the light that the master painters depicted in their work. (When I can’t get to a gallery I have been known to set up camp in a bookstore and do the same in the art book section). An interesting observation is that the convention of the day in contemporary documentary filmmaking is for the subject to look toward the director who is sitting on the same side as the key light thereby exposing the less lit side of their face to the camera. The grand master painters did the opposite by typically arranging their subjects to face away from the key light thereby exposing the more lit side of their faces. While I appreciate the quality of the light that the grand masters used, I do subscribe to the contemporary positioning convention of having the subject face the key light. Apologies Rembrandt.

Higgins: To create a lighting look that doesn’t change at all during a five-to-six hour period is a challenge if you don’t have a crew of technicians and a truck full of gear. With luck no one will know that we didn’t have either.

Higgins: My knee jerk answer to why I opt for the C300 is that for my handheld observational documentary work I really appreciate the small-form factor of the C300. I love the fact that I can carry an entire working camera package (with a few lenses) on to a plane in a single 1510 Pelican case. This means whether or not the tripod and lights arrive on time we can shoot regardless. That said this production was almost all in LA (where I am based) and it was 90 percent interview based. With two 64 gig cards and AC power we were able to roll without ever stopping for camera for almost six hours. The longest interview was an eight hour mega monster marathon interview with OJ’s agent Mike Gilbert. For that one we did actually stop to eat but besides that we basically rolled straight through. Lens wise I shot the vast majority on the 50mm at an f2. That way I could make the background abstract without fearing that the subject would go in and out of focus as they breathed.

Higgins: I’m quite a minimalist and tend to try and use as little gear as possible. For this production we used a single Diva light as our key, a big piece of duvetin as negative fill and either a pepper or an LED as a background light. The biggest challenge was blocking out all the natural light in spaces that were often quite large with the tiny package and crew of two that we had available.

Higgins: We shot Canon C-log on this film, so the look is a little baked in with that to some extent. Final finishing was a matter of fine tuning the contrast and saturation.