“A Poultry-Infused Visual Remix” of The Shining: Nick DenBoer on The Chickening 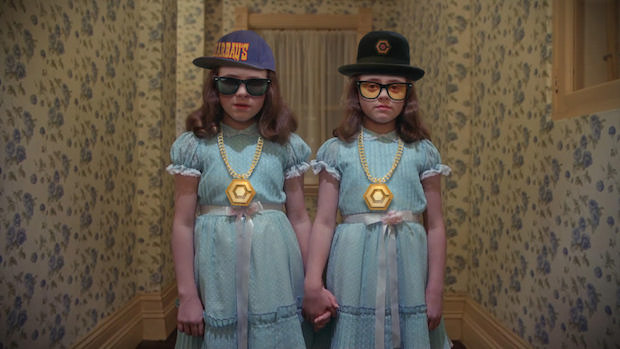 A garish, absurdist riff off The Shining, The Chickening is prime fodder for Sundance’s Midnight Shorts Program. Animation duo Nick DenBoer and Davy Force wrote and directed the film, which blends shots from The Shining with a Tim & Eric-esque cocktail of inventive, abrasive imagery about a fried chicken tycoon. Below, DenBoer discusses how he and Force created the meticulously crafted images of their giddy short film.

Nick DenBoer: My co-director Davy Force and I collaborated on our film remotely. He worked from his studio in Los Angeles and I from my studio in Toronto. We both wrote, directed, shot, edited and did the visual FX on various scenes. We both have a similar well-rounded skill set where we can produce content from start to finish in our home studios, so it makes for great collaboration. We’ve worked together this way on past projects, so we thought we’d do it again on this film, The Chickening.

Nick DenBoer: Our goal for this film was to create a new narrative by altering and remixing an existing film. The Chickening is a poultry-infused visual remix of Stanley Kubrick’s The Shining. We added new characters, altered existing characters and changed the scenery and architecture to transform the classic film into our new story. Our cinematography was specially executed to meld with the original film. Characters were shot on green screen and made to interact with the existing scenes, so much of our camera work was determined by the existing compositions. The enhancement of the film’s storytelling came through in the juxtaposition of mixing our new cinematography with that of the original film.

Nick DenBoer: Inherently because this is a remix of a Kubrick film, his influence is present. We filled the scenes with easter eggs resulting in every shot being a visually loaded composition. It’s the kind of film where you keep seeing things you missed the more you watch it, much like Kubrick’s work.

Nick DenBoer: The biggest challenge was the visual transformation of the film. We wanted to create something new while paying homage to the original film. If we didn’t go far enough with the transformation it would be like many other remixes online and we wanted to achieve a higher level of visual remix so we really took it up a notch and used every VFX trick in the book to transform The Shining into this crazy chicken meltdown.

Nick DenBoer: I shot on a Canon 5d for our green screen character shoots with a 24-105mm ef lens. It’s the best camera I currently own and I like it because I often need to mix high-res stills with video in post production and having them come out of the same camera makes for seamless integration.

Nick DenBoer: Once again, because we were compositing shots into an existing film, we needed to simulate the lighting from the original source footage. Matching the shadows and general light direction is my priority in this case. Temperature and color can be fixed in post but shadow casting and light direction can’t be fixed so easily so most of the effort is in getting the direction and light levels where they need to be. I put two monitors side by side so I can have a live preview of the source scene and what I’m shooting to compare. This setup usually does the trick.

Nick DenBoer: The most difficult scene was making the twin girls in the hallway of The Shining dance. I shot my body dancing on green screen, then mapped the girls’ head and dresses onto my body by animating them in after effects. I then built a 3d model of the hallway and projection mapped a still of the empty hallway onto it. Finally the animated girls were placed into the 3D scene and a virtual camera moved throughout the scene to bring the shot to life.

Nick DenBoer: Finishing the film involved me piecing together all of the scenes that both Davy and I created remotely into one timeline. The final edit came together organically and I edited while scenes came in. It took form quickly and we did several rounds of touch ups and animation tweaks until it was ready for screening. Virtually none of our film was baked in. Everything was done in post. All of our shooting was done on green screen and composited in after effects.