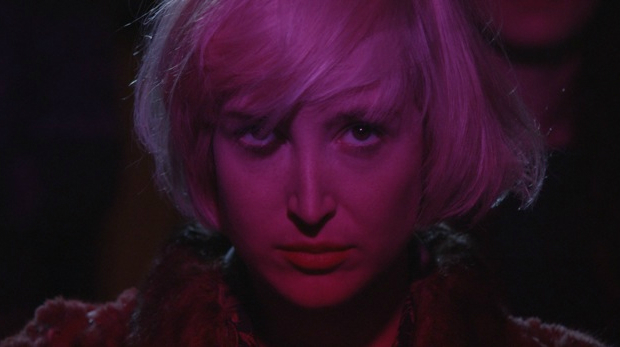 Striving to become a professional actress is a lifestyle choice accompanied by feelings of extreme competitiveness and inadequacy. Each waking hour is a moment you could be attempting to improve your craft or desperately trying to secure more work. As endless auditions make way to too few callbacks, you may begin to reconsider the professional hell you’ve chosen for yourself, being judged as much for your skills as for your facial features and body type. It’s enough to make anyone grow a little bitter.

Diamond Tongues, a dark Canadian comedy that premiered at last year’s Slamdance Film Festival, finds its muse in actress and musician Leah Goldstein’s performance as Edith Welland. A twenty-something struggling actress who, despite attempts to sabotage other thespians’ success for the furtherment of her own, finds herself auditioning for awful horror movies and sleeping with her sleazy acting teacher, Edith is both an egotist and someone to root for. Her conniving sensibilities are fascinating to watch play out, and Diamond Tonguesis a careful study of a woman attempting to find her place amongst a cast of characters.

As the film opens today in IFP Screen Forward at the Made in NY Media Center, I spoke with Toronto-based filmmakers Pavan Moondi and Brian Robertson about shooting on the streets of Toronto with a microbudget, crafting a hard-to-love lead character, and working on a new feature featuring Tim Heidecker of Tim & Eric fame.

Filmmaker: Pavan and Brian, you both had previously worked together on the feature film Everyday is Like Sunday, but Diamond Tongues marks the first time you’re co-directing a film. How did you both meet and what lead to the formation of this creative team?

Moondi: We met through a mutual friend and were brought together to create The Seventh Art, which was a video magazine about cinema based in Toronto. We had been working on that for about six months when I brought Brian on-board to produce Everyday Is Like Sunday, which I had been trying to get made for a while.

Robertson: By working together on The Seventh Art we learned how to work quickly and efficiently, improvising set ups and lighting a huge variety of locations in Toronto. We brought that mentality into Everyday is Like Sunday, and that had a fast, improvised feel to it. We moved even quicker on Diamond Tongues.

Filmmaker: How did the idea for Diamond Tongues come about? As the film lives and dies by Leah Goldstein’s performance, had you wanted to write a film for her, or had this character been rummaging through your minds for awhile?

Robertson: While it was something that rang true for us, we also knew that it was risky to try and bring a seemingly unlikeable character to life and have our audience sit with her for 90 minutes. The character was pretty terrible on the page, but we always wanted her to be relatable and likeable. It actually took us about four to five months before we found Leah. As soon as we saw her, she had a mischievousness about her that we both saw in the character. Before we found her, we had been pretty close to admitting that we wouldn’t find the right actress to play the part.

Filmmaker: Her portrayal of Edith Welland is wide-eyed and observational. Her voice has an inquisitive lift to it, as if everything she says is unfiltered and yet hiding a lack of confidence within herself. When her friends tell her stories about their successful careers, she takes those stories and passes them off as her own. She’s a complex person who isn’t easy to embrace. What did Leah bring to the role that wasn’t clearly laid out in the script and how hard did you work to resist sentimentalizing your heroine?

Moondi: We knew that we needed to cast someone who was very naturally likeable as a person so that the character on-screen would hopefully conflict the audience. Edith is, ideally, someone you initially think might be a cool person but who then repeatedly makes the wrong decisions.

Robertson: Leah is the complete opposite of Edith in real life. She’s insanely driven, working harder than most people I know and she’s really supportive of all her friends. I’d say these differences is what was so attractive to Leah to take the role. It was definitely a challenge for her.

Filmmaker: The film’s opening minutes place us within the uncleanliness of networking and industry parties. Everyone is either successful or desiring success, and talk of being cast in a number of web series or being offered to teach highfalutin masterclasses comes off as self-aggrandizing to the utmost degree. How familiar are you with that scene?

Moondi: More familiar than we wish we were.

Filmmaker: The world of Diamond Tongues features a Toronto that’s a city of cafes and bars where artists run into one another, quickly catch-up, save face, and dip out. Everyone’s trying to make connections, get ahead, and spread the word on their next Kickstarter campaign. In what way were you conscious of the way the city plays a central character in the film?

Moondi: We didn’t think too much about portraying the city in any specific way. We just tried to use locations that we thought the characters in the film would actually hang out at (and mostly where we hang out in real life). I don’t think artists trying to network and get-ahead is specific to Toronto, but because Edith is in every scene of the film, we really see all these smaller characters who dip in and out the way Edith sees them.

Filmmaker: As the film incorporates the shooting of the streets of Toronto, on the Metro, city buses, etc., I imagine that it helped to be as free and mobile as possible. What did you shoot on and how did you adjust for those short exterior sequences that have to capture a glimpse of the city very quickly?

Moondi: We almost got kicked off the subway and streetcars and fined a couple of times. They don’t make it easy for super micro-budget films to shoot on public transit and so we had to steal those. We had street permits for most exterior scenes but our setup was pretty mobile, usually just Brian and myself, two camera operators, a sound guy, a production assistant and the actors.

Robertson: We shot on the Red Epic and Red Scarlet and we drove around in our DP [Peter Dreimanis’] van. We had finite time with Peter and Leah before they went on tour with the band again, so we were required to shoot whenever we could. We planned on shooting a montage one night and right as we rolled camera, the entire west end went into a blackout. We had no choice but to film in the dark. I think we captured one of the more striking images in the film that night (the fire truck driving through the blacked-out streets).

Filmmaker: There’s a memorable scene in which Edith fantasizes about being a big-time star interviewed on George Stroumboulopoulos’s talk show. You then cut to her lying in bed touching herself — the pleasurable experience of celebrity streamlined with the satisfactory and modest feeling of touch. How did you get Stroumboulopoulos to make a cameo and what was the impetus behind blurring the lines between fiction and reality?

Robertson: Pavan and I run into George at different events and he’s really personable. We thought it would be interesting if we could pitch George on having Leah on his show in character. One of the film’s producers, Sarah Haywood, is a friend of George’s producer and she connected the dots for us. We actually shot that cameo on the second-to-last taping of George’s show. We also met Laura Jane Grace (of Against Me) there, who ended up making a cameo in the film as a bartender.

Filmmaker: One striking moment in the film is when Edith, sitting in the front row, watches her roomate’s performance in a play. You cut to a high-angle, overhead shot of Edith, slowly pulling the camera in closer to her face as the strong performance of her friend drives her to the brink of madness. How do you visually allow the audience do get inside Edith’s head?

Moondi: We try to put as much thought as possible into every camera setup in the film. It seems like a waste to go to the trouble of getting a feature film made and then not putting real thought into such a major component of the film. We tried to shoot her tight when she was in conversations with other characters, as often her own reactions are far more important than who she’s speaking to. We shot her pretty wide when she was alone to emphasize her loneliness and how ill-fitted she is for the world around her. The shot you’re describing is one of those examples of just trying to emphasize how she is progressively getting inside her own head while watching her friend’s play and considering the possibility of making a catastrophically bad decision.

Filmmaker: Your use of fluorescent lighting is eye-catching, and it particularly skews toward that of the pink and purple variety. Whether in night club settings (I’m reminded of the close-up of Edith’s face as she sips a beer while watching a live band’s performance), or via the opening title card sequence, these lush colors give the film an identity that’s now being reflected via your film’s poster and marketing materials. Where did the choice for those colors’ usage stem from?

Moondi: Our distributor in Canada is one of the bigger distributors in the country, but we were able to make all our own marketing materials without any oversight (trailers, posters, website, etc.). We knew early on that the film would use a lots of pinks and purples and that the title text in the film would be a bit more flashy than the standard all caps white sans-serif font you see in a lot of films. The tone of the film is pretty fast paced and accessible while profiling an extremely difficult character, and so it’s a unique mix that we wanted reflected in the way we approached the style of the film and its marketing.

Filmmaker: How did Telefilm Canada help with the production?

Moondi: We shot the film with a tiny amount of private investment and once we had it in the can we showed it to Telefilm and were lucky enough to have them cover the costs of the post-production.

Robertson: We had gone to Telefilm before we shot anything and had them read the script and discussed what the film was going to be and how it would look. We were pretty communicative with them throughout the whole process.

Filmmaker: What can you tell us about Sundowners, your next film that will feature Tim Heidecker?

Moondi: We’re speaking with you from Colombia at about one third of the way through the shoot, so the film is still being shaped. It’s about two guys who are hired to film a destination wedding at a tropical vacation resort and things go very badly. It stars stand-up comedian Phil Hanley and Luke Lalonde from the band Born Ruffians, both making their acting debuts. Tim plays their boss. It’s a bit more overtly comedic than Diamond Tongues, but there’s quite a bit of underlying darkness we delve into.

Robertson: We’ve got three more days here and then we’re heading back to Toronto to shoot the rest of the film. Tim shows up in the Toronto sequences. We’re huge fans of his and can’t wait to get to work with him.