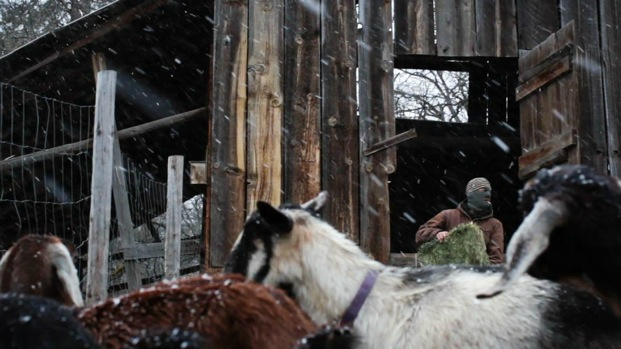 Placing the viewer amidst the everyday workings of a goat farm in southern Oregon, Christopher LaMarca’s Boone represents a daring exercise in direct cinema filmmaking. Originally a photojournalist interested in environmental causes, LaMarca found the setting of the farm to be an ideal location for one of his two feature filmmaking debuts (The Pearl, which he co-directed, premiered recently at True/False). Boone immerses the viewer in the fields, barns and homes of the farm’s human and animal inhabitants.

As discussed below, LaMarca spent much more time on the farm than originally planned, finding it necessary to fully immerse himself in the day-to-day experience of the strenuous grind. With over 500 hours of footage by the end of production, LaMarca and editor Katrina Taylor developed a film that was both all-encompassing and a fragmentary experience, a portrait of farm life both specific to the location and universal in its depiction of the occupation.

Filmmaker: Along with The Pearl, a documentary you co-directed with fellow 25 New Face Jessica Dimmock that world premiered at the True/False film festival, Boone marks your second wold premiere in the span of just two weeks. As I’m speaking with you pre-SXSW, what have these two weeks been like for you?

LaMarca: The past two weeks have been a complete whirlwind! I was thrilled to be accepted into two such amazing festivals and really had to move quickly in order to make everything happen. At the time, Boone was locking picture and The Pearl was finishing its sound mix. We had a very tight, small team working on both films and fortunately were able to keep everything on point and deliver on time. It’s definitely been one the most challenging times I’ve had during this whole filmmaking process. That said, showing The Pearl at True/False was amazing. We had four packed houses and standing ovations.

We were able to bring our main characters out to the screenings and it created an electricity in the audience and provide amazing Q&As.  We had many people come up afterward and talk about their personal stories, in connection to our four main characters, and what their struggles as an older generation of transpeople has been like. As for Boone, I feel like SXSW is a perfect fit for the film. The combination of such a vibrant food and farming community with the youthfulness of the city seemed like the perfect way to bring the film out into the world. There is a lot of buzz about moving about “back to the land” and young people wanting to make major changes in the way they are moving through the world. We are excited to show the experience of living and working on Boone’s Farm.

Filmmaker: You had a successful background in photojournalism before embarking on Boone. What made you want want to pick up a film camera and document this story?

LaMarca: I have been covering environmental issues as a photojournalist for over 10 years. In 2004, over the course of four summers, I was living with a group of forest activists fighting to save old-growth forests in southern Oregon. This group of people were living in the forest for months at a time in the trees and surrounding areas acting as physical barriers between themselves, the loggers and law enforcement. One of these activists was Mookie Moss, the owner of Boone’s Farm where the film takes place. I had been photographing him for two years when he told me about his farm, inviting me to stay for the week. The minute I stepped foot on that land I knew I had found something special. I felt like I’d stepped back in time and knew I had to make a film about this lost way of life. Fellow farmers Dana Kristal and Zac Jasper Miller were living and working there as well, and I was deeply inspired by their life choices and daily actions. I think certain people have the “calling” or the will to live their lives in alignment with their heart and belief systems; these are some of those people. They carry a deep sense of pride for the food they produce and the animals they care for; a deep commitment to taking responsibility for one’s sustenance. I could see they were moving through the world with clear conviction, even when it pushed them to their emotional, physical and financial edge. After living with these farmers and enduring 15-hour work days, I realized it wasn’t only the hard work that moved me, but the relationships they had with their animals. A way of life where one’s survival is deeply intertwined with the animals they depend on for food and the daily experience of dealing with the elements of nature: inevitably, the cycles of life and death.

Filmmaker: To shoot the film, you lived on your film’s central location for two years. How did the film develop from conception through production?

LaMarca: I came to Boone’s Farm with visions of spending the weekend tending to cute animals and getting my hands in the dirt. I quickly realized my perception of this way of life was based on the romanticized feeling of being at farmers markets and not the gritty reality of actually farming. At first I planned to film only one or two weeks out of every month but quickly realized that I wouldn’t be pushing my own comfort boundaries. The true emotional and physical experience of this lifestyle would not translate into the film. How could I say I’m making a film about the unrelenting experience of living close to the land if I wasn’t willing to have that experience myself? I decided to uproot my life and move to the farm where I lived, worked, and filmed for two years. I was a one-man show while living there,  sound, camera, coffee boy, etc. Without other people involved in the shooting of the film,  it created a special intimacy and trust with the farmers. Fortunately, my producer and editor Katrina Taylor came on very early in the filming process and was able to manage and organize footage out of Portland. We started working together on Boone and then on The Pearl, so we were able to refine and perfect our method of working long distance. Shortly after I finished filming, Boone was accepted into the Film Independent Documentary lab and, a few years later, the IFP Documentary Lab. That helped greatly in understanding the complex world of actually delivering a film out into the world.

Filmmaker: With over 500 hours of footage, how did you begin to whittle the film down to a 78-minute fine cut? Did you find your story through the edit?

LaMarca: During the two years that I lived and worked on the farm, I realized the most authentic and engaging portrait of this existence should not be centered around advocacy or the struggles of a small farm. It should instead  be experienced through an experiential journey. That said, we struggled with finding the funds to complete the film and stay true to that vision. In documentary film, raising money often revolves around advocacy and can be difficult when you craft a story that doesn’t have an agenda.  I was most interested in how it felt to actually be on the farm. What is the experience like when you are living this close to the land, animals and each other?

In regards to the amount of hours [we shot], I can answer that in two parts. When I moved to Boone’s Farm I was also picking up a film camera for the first time. Naturally, there is a learning curve that needs to take place. I was essentially putting myself through film school during the process, and so there was a lot of trial and error in the field. A good portion of that 500 hours was shit, but it was shit that would pay off down the road as I was finding my voice as a filmmaker. Secondly, the farmers are always working.  If you added up all the hours the farmers worked over the course of two years compared to how much I shot, it’s actually not that much footage. The edit was a huge part of the construction of this film and Katrina and myself would talk about the edit like it was dance choreography. When you live like this, there is a hypnotic rhythm that happens when living close to the elements. The edit had to feel the same way. The story had to be told viscerally and with a profound sense of place. The result is a film that rides the line of being both quiet and savage in the same breath; a haunting portrayal of the heart, soul and grit of a farmer’s journey.

Filmmaker: The film’s style feels influenced by the work of the Harvard Sensory Ethnography Lab. Are you a fan of their work and direct cinema as a narrative device?

LaMarca: The design for this movie was based around the sensual and chaotic experience of living with the elements. When you live like this, the human being becomes a part of the larger natural system. The land, weather, animals, and people are deeply intertwined and dependent on one another for survival. The visceral elements of this cycle are what drives the story; this is a character-driven film but the humans are not the only principal characters. Another huge part of this film is the soundscape and how it interacts with the negative space of the images. I recorded many of the sounds on the farm separately in order to bring out the full sensory experience of what it feels like to be there. One of the first things I realized moving to the farm was how cut off we are from darkness living in urban environments. These farmers are often working before sunrise and after sunset using their ears as a guide. I was fascinated by that. The relationship between darkness and the sounds of the farm are a huge part of this film.

When I first started showing parts of Boone in an effort to raise money and support, everyone kept asking us if we had seen Sweetgrass. When I eventually was able to watch the film, I immediately could see the connection with my own work. I’ve continued to love many of the films that have come out of the Sensory Ethnography lab. As a narrative device, direct cinema for me is a very powerful tool. I think anytime we have the chance to be confronted with a sensory experience outside of our emotional or physical comfort boundaries, it allows for reflection in our place in society.