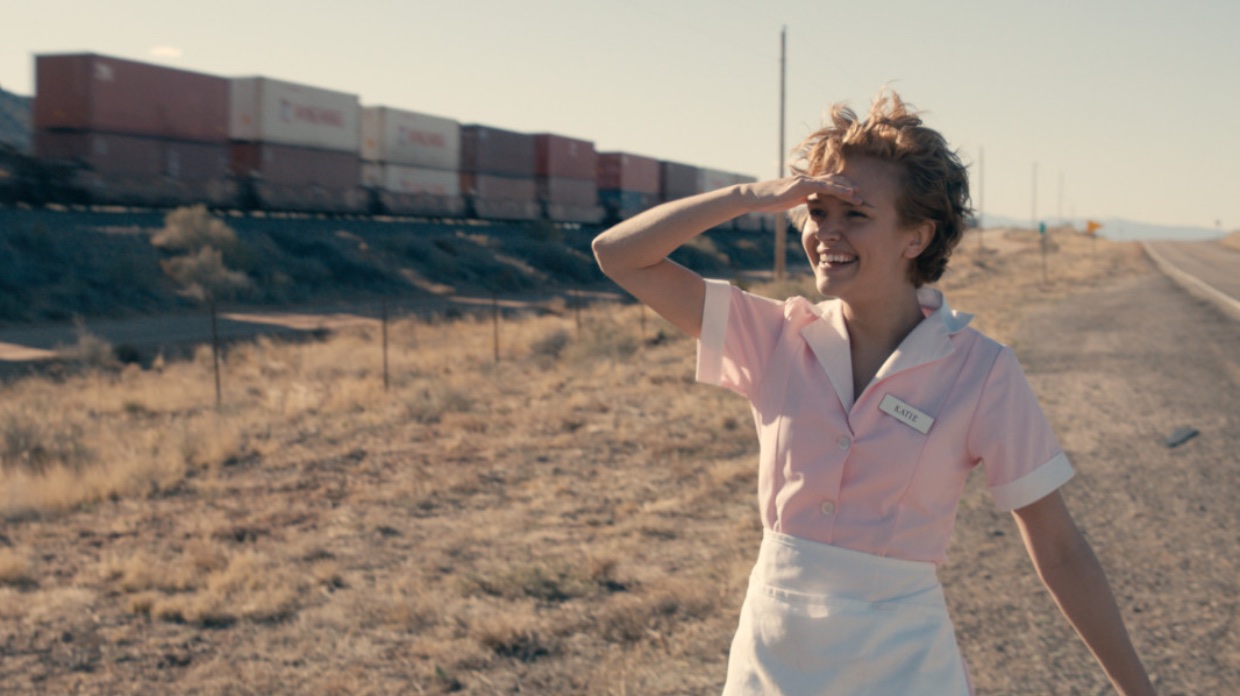 Katie Says Goodbye reps the feature directing debut of Alaska-born NYU writer/director Wayne Roberts. An alumni film of the IFP Narrative Lab, Katie Says Goodbye is described as “a cautionary tale for dreamers,” a dark drama about a young waitress striving to leave New Mexico for a new and better life in San Francisco. There’s a brutal scene at the film’s core, which we circle around in non-spoiler fashion in the below interview, in which we also discuss Roberts’ casting of Me and Earl and the Dying Girl‘s Olivia Cooke in his lead role as well as his advice to other first-time directors.

Filmmaker: Let’s start by talking about the film’s eponymous Katie. What was the inspiration for this character, and how does her relationship to her sexuality become an aspect of the story?

Roberts: The genesis of the story was a vision of Katie. The title came later that night, as well. Sounds crazy — and, hell, it probably is — but it’s the truth.

Katie is not based on anyone that I know and/or have met, nor has she been shaped by research of any sort. I quite frankly don’t believe in research for stories like this. If you hold a spiritual connection with a character, you simply allow them to tell their story and you don’t interfere.

As for Katie’s sexuality, Katie grew up in the presence of sex from her very start. This doesn’t only pertain to the promiscuity of her mother, but also to the trailer park and town itself. Sex holds a fair amount of real estate in Katie’s life and it always has.

That said, it doesn’t hold any sort of puritanical weight. Sex was never coveted by those in Katie’s world, nor was it something to deny or be ashamed of. It’s all just a simple fact of life.

Despite sex playing a large part within Katie’s film, we never set out to create a “sexy” or provocative film. Our attitude is similar to that of our characters — we eat, we shit, we fuck (granted, all require a bit of luck). We do nothing to elevate and/or romanticize the act, and we simply present things as they are.

Filmmaker: Your film takes Cooke’s character to a very dark place, and without getting into spoilers, could you discuss how your approach to the film’s most intense scenes in terms of calibrating their impact on the audience?

Roberts: For this particular event, it was important that the scene held the greatest emotional impact possible while forever respecting Katie. The emotional weight of what Katie goes through needs to be truly felt.

The scene is certainly painful, but so is the act. For it to be otherwise is so wildly disrespectful to anyone whose life has been affected by such. To skip over the event and/or to downplay the act would be criminal, nor would it help enact change of any sort.

And so that dark place you’re talking about really needed to be felt and to the utmost degree. We’re not going to change or improve as a society if we’re not willing to face our issues in full, and this particular vile problem is one that desperately needs to be addressed.

Lastly, the scene needed to be played out in a single take. If any editing was required, it would fall into the territory of manipulation and potentially be gratuitous, jeopardizing the care and compassion Katie and anyone else whose life has been touched by such deserves.

Filmmaker: Tell us how you connected with Cooke and also with your various producers, including the Borderline gang. What was the path towards getting this film off the ground?

Olivia and I connected through our two brilliant casting directors, Cindy Tolan and Adam Caldwell, and her agency at the time. Once I saw Olivia’s headshot and watched part of her reel, I knew she was meant to portray Katie. She is undoubtedly one of the greats.

Regarding Borderline, we all met at NYU and have been incredibly close ever since. They’re truly some of the finest people, not to mention some of the most talented filmmakers working today.

As for the producers, Sean connected me with Jake Wasserman. Eric Schultz of Relic Pictures joined the team shortly thereafter, and after then things started to fall into place.

It took about a year’s worth of work before we got on set, which I suppose in the grand scheme of things is quite fast.

Filmmaker: This is your first film as a director, and in the Hollywood Reporter article announcing its start of production, the writer said that the Antonio, Josh and Sean had encouraged you to direct this film after they read the script. Had you originally thought of another director? And, what was the most challenging aspect of directing this film as a first-time director?

Roberts: You read between those lines correctly.

Given the sensitivity of Katie’s journey, I originally believed a woman should direct the film. However, I came to realize the shortsightedness and danger of this belief.

We need to be free to tell the stories we want to tell and to focus simply on holding compassion for our characters, regardless of the external differences that might exist. Those differences might also shed new light, as well.

For example, look at what Tolstoy did with Anna Karenina and Hanya Yanagihara with A Little Life (it’s brilliant — if you want to feel something, pick it up). Gender is not the end all be all. Furthermore, my life has been shaped by many of the same things as Katie’s.

I also have a hard time holding compassion for men and/or really giving a damn about their plights. I want to connect with a character and to be emotionally moved by a film, and for me to do so with a male protagonist is incredibly difficult. They just don’t interest me, and god knows there are plenty of stories focused on men.

So I could easily connect with Katie and hold her in the right manner within the heart to best direct her film. I also felt it was a continuation of my responsibilities and duties to Katie, as well. To do otherwise would have been a disservice to her. And so I corrected my thinking and pushed forward with myself directing.

Regarding challenges, the most difficult thing has to be financial, or rather the lack thereof.

If you want to be a filmmaker and if your mommy and daddy ain’t rich (and mine are not), then start saving up at least a year’s worth of living expenses and working on buffing up your credit. I assure you you’re going to need it.

Also, never do a film without a post supervisor. I certainly won’t ever again.

Filmmaker: Discuss your collaboration with DP Paula Huidobro. What visual strategies did you develop together to give your film a distinct style, and how did you achieve them?

Roberts: Paula is fantastic and I cannot praise her enough. She operated the camera and a great number of takes were often required, oftentimes with difficult blocking to execute.

Regarding a distinctive style, our primary aim was to be as invisible as possible and to avoid any kind of stylized filmmaking. We’re meant to feel an emotional connection to Katie first and foremost; for her film to feel real and raw and authentic. Any kind of flashy filmmaking calls attention to itself and pulls viewers out of the film.

So we avoided stylistic filmmaking and stuck to strict concepts and self-appointed rules. That said, by operating under such, our style defined itself, or rather the limitations of such. We’re left with a film that holds a particular formation, and one that I believe best serves Katie’s story.

And we achieved this by working with incredibly talented people. There’s not that many people you can do six-minute takes with, but with Olivia and everyone else on your team, you most certainly can. And if you’re presented with that opportunity, you better damn well take advantage of it.