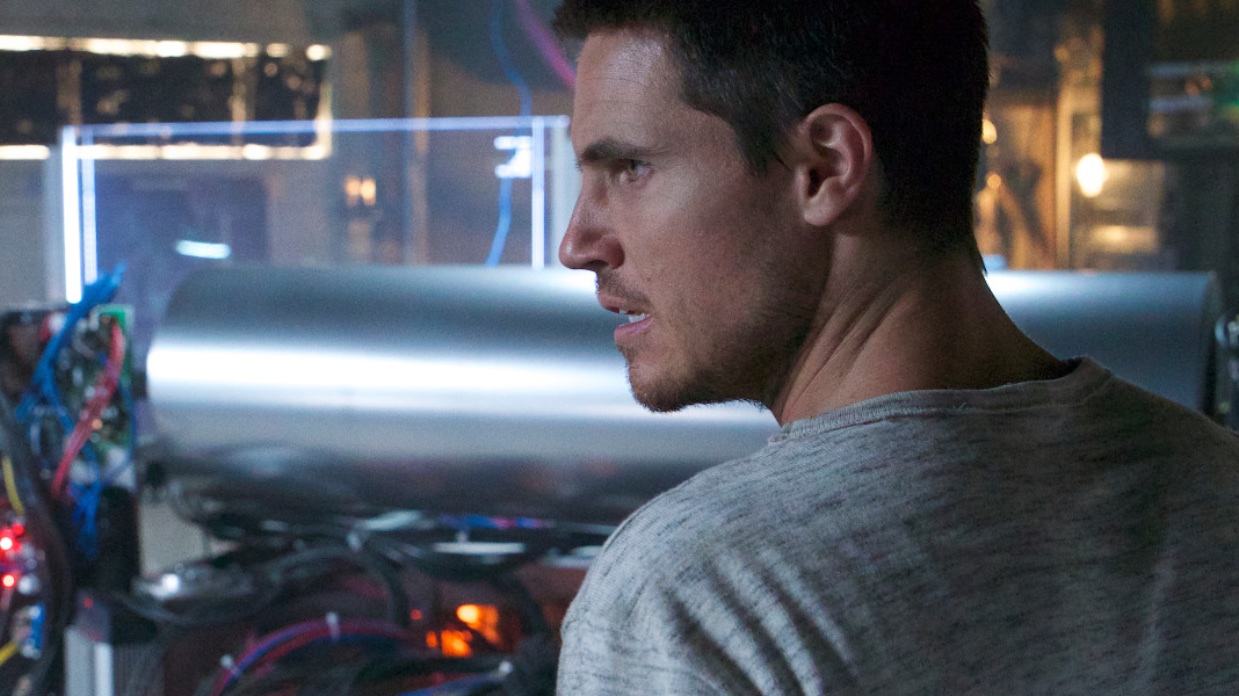 Orphan Black screenwriter Tony Elliott makes his feature debut with the time-twisting dystopian thriller ARQ, premiering today at the Toronto International Film Festival. Employing the now venerable time-loop trope, ARQ features a couple trying to figure out why their world is repeating, and what that has to do with the giant multi-national they were both involved with. Below, Elliott talks about his various cinematic inspirations, what he learned from writing Orphan Black, and how he made a futuristic science fiction film on a very low budget.

Filmmaker: Your short film, Entangled, dealt, in part, with quantum physics. Tell me about the scientific or perhaps political or philosophical ideas underlying ARQ, your first feature.

Elliott: In my writing I’ve always leaned toward the scientific and rational rather than magical or supernatural. Back in 2008, when I first came up with the initial premise of someone caught in a time loop, I wondered how there might be technical and thematic motivations, and if there was a way to unite them in narrative purpose.

Obviously there’s a degree of liberty whenever you explore time manipulation, but I wanted the story to feel as grounded and plausible as possible. So after establishing the temporal angle, I started world-building — extrapolating the world’s current conflicts, issues, and potential outcomes — and saw thematic parallels. So while that’s all cool stuff with great texture, what ultimately matters are the characters and their journeys.

ARQ is a personal story about hope. The times we’re in now seem particularly precarious politically, environmentally and socially. Some days the world feels frenetic and spiralling out of control. And while we’re in unprecedented territory, history repeats. From the political to the personal we keep making the same choices — and the same mistakes — over and over again. We’re only human. Like the lead character Renton, I know what it’s like to be trapped in a cycle of self-destructive behavior. And like the co-lead, Hannah, I know what it’s like to strive to be better. And like them both I know what it’s like to keep trying — yet keep failing. I’m only human. ARQ is a story about fighting for what matters, no matter the odds or the obstacles. It’s about believing that we can change, if we keep trying. That we will change for the better, as long as we never give up. I believe that for myself as I do for humanity. ARQ is hopeful.

Filmmaker: From Groundhogs Day to Source Code to Edge of Tomorrow, the time loop movie has become something of a sub-genre of its own. What were you trying to do differently in this movie, and what familiar elements of this genre were you looking to avoid? And were there less obvious films that were influences on you here?

Elliott: I wrote the first draft of ARQ a few years before either Source Code or Edge of Tomorrow were made, so the popular time loop reference films I had at the time were Primer, Groundhog’s Day and Back to the Future, all of which are exceptional films but of course are quite different than ARQ. In writing ARQ I didn’t consider genre; I considered story and character. I wrote to surprise myself, tell a good story, and having something to say.

As for time loop genre tropes, I didn’t want to overdo the repetition gags where characters experience the same moments over and over. While that’s fun and pertinent, and I didn’t avoid them entirely, it’s not necessarily story. So I kept those incidents to a minimum and just focused on the characters. The fact that time is looping is almost a backdrop to what’s happening between them. As for cinematic influences, I studied Alfonso Cauron’s Children of Men for its emotional authenticity, realistic production design, and dynamic shooting style. As well, Andrea Arnold’s Red Road and Jacques Audiard’s Un Prophète were very influential in terms of their tension, POV and shooting style.

Filmmaker: ARQ is working within a much lower budget range than a film like Edge of Tomorrow. What was its scope of production? How many days did you shoot? And given that you wouldn’t have the kind of large-scale effects sequences of a huge Hollywood film, what were the elements of the story you emphasized instead?

Elliott: The budget for ARQ was under $2 million, we prepped for five weeks, shot for 19 days on a stage in Toronto. Given the uniqueness of the production — shooting at the same location — my producers and I decided to be be top-heavy in prep and focus resources on creating the strongest production design. So when we started shooting we scaled down to a lean crew. I may have had almost as many crew on my 15-min short film that I did when shooting ARQ.

As for approaching a sci-fi story with a low budget, my mantra to the cast and crew would have been the same if I had $50 million — grounded naturalism, believability, and emotional authenticity. I tried to not make conventional choices, which I think help in making ARQ feel like its own thing. As for story, because ARQ is also a claustrophobic, trapped-in-a-house narrative, I tried to create a world outside that felt imposing and epic, that impacts what happens inside, and that what happens inside conversely affects the larger world. Big stakes, but that fit the characters and suited the story.

Filmmaker: You went from film school to short films to working steadily in television, most particularly on Orphan Black. Now, you’ve made your first feature. What have you brought from your work on Orphan Black to the feature format? What have you learned that carried over? And, given how established you are in television, what appeal does the feature film format hold for you?

Elliott: Coincidentally, the ARQ script is what got me my writing gig on Orphan Black. I didn’t have a ready TV sample so instead submitted ARQ. Fortunately, the showrunners were also filmmakers, and sci-fi too, so I think they were able to see how my skills, tastes and sensibilities demonstrated in ARQ could translate to the Orphan Black world. I was incredibly fortunate to be a part of the writing team. I was surrounded by talented, generous, and experienced senior writers who helped me understand story and character on much deeper levels. On Orphan Black the bar was set incredibly high. I like to think I learned that lesson.

As for film versus TV, the difference is generally the kinds of stories you can tell. I love the collaborative nature of TV writing, and the ability to go long and deep with characters and story. But I also love short stories that can be told in 90 or so minutes. It really depends on the story and characters. But what I find especially rewarding is directing my scripts. If story is king, execution is queen. The script is the beginning of telling the story. Making decisions in prep, during production, and then in editing/post, you’re continuously telling the story — learning who the characters are, what the story is really about, what you’re trying to say — until it’s finally done. Directing has made me a much stronger writer.

Filmmaker: Finally, what advice do you have for young filmmakers attempting to break into television writing? What should they know that most don’t?

Elliott: Probably nothing that hasn’t been said before — write, rewrite, repeat. Keep at it to find your voice. What kind of stories you want to tell, what you want to say? Because that’s the most valuable commodity there is. And keep at it. I toiled for several years before I got my big break on Orphan Black. But I kept up hope.