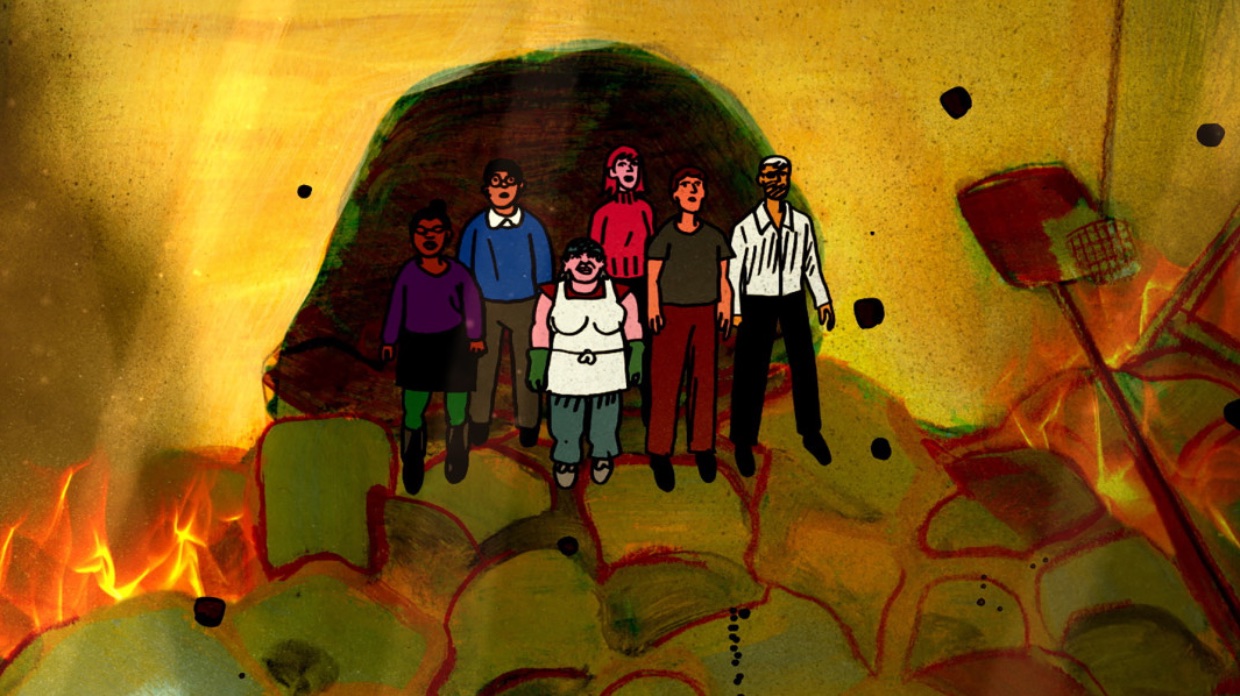 My Entire High School Sinking into the Sea

Where is all the great independent animation? While Pixar and LAIKA are spinning out animated classics for a new generation, and independent filmmakers are putting their own idiosyncratic spins on nearly every genre, there have been relatively few animated independent features in recent years. And this is despite a boom in quality graphic novels and the new talent that creates them.

It’s too early to know whether or not My Entire High School Sinking into the Sea is the beginning of a new movement in independent animation, but the feature, premiering tomorrow at the Toronto International Film Festival, brings with it an amazing voice cast (Jason Schwartzman, Susan Sarandon, Lena Dunham, Reggie Watts) and a director whose personal, highly original and delightfully idiosyncratic work has distinguished itself in graphic novels like Love Eats Brain, BodyWorld and Bottomless Belly Button. Described as a cross between John Hughes and The Poseidon Adventure, My Entire High School Sinking into the Sea follows a group of high school journalists, led by a tyro Carl Woodward named Dash, as they first investigate their school’s building code violations and then fight to save their lives when the school is literally thrown into the ocean by an earthquake. Below, I ask Shaw about his story’s origins, how directing animation is different from drawing on the page, and what happened to a previously announced feature that made the rounds at the Sundance Labs.

My Entire High School Sinking into the Sea premieres tomorrow at the Toronto International Film Festival.

Filmmaker: Let’s start with the obvious question — about the origins of My Entire High School Sinking into the Sea. Despite, or, perhaps, because of its tale of suburban apocalypse, the film feels quite personal. How much of its high school story did you experience yourself? Did you work for the school newspaper, and did you experience moments of vindictive jealousy that got you in hot water?

Shaw: Yes, I tried to keep it all rooted in autobiography. I did work on a school newspaper. Like the characters in the movie, I loved books. Books (especially comic books) and writing and editing were the most important things to me. Regretfully, I was sometimes mean to my (only) friends. For the movie, I changed other people’s names but I kept my name the same because I thought it’d be funny. The goal was to take real experiences but warp and stylize them to move it closer to how it “felt” instead of a literal report. Everything in the movie is being filtered through Dash’s eyes, so you get the feeling the whole movie is this kid’s fantasy that has been unmoored from reality.

Filmmaker: You’ve spoken in interviews about the collage aspects of your graphic novels and the kind of formal commitments your graphic style makes on the page. Tell me about how much of how you translated your style to film and how you perhaps changed or altered it? How did film language alter the way you see and convey images?

Shaw: Comics are about simultaneity and juxtapositions. Time has been flattened onto the page. Film, on the other hand, is completely time-based. You’re altering how time is experienced. It’s maybe more like telling someone a story vocally, in that you’re pausing between words, or controlling the order in which you’re presenting information. Interesting graphics won’t take you very far in a movie… Sometimes a movie will have amazing visuals, but I still get bored 30 seconds in. So with film there has to be something about that control of time and events that grabs you and really pulls you in. Maybe it’s more like music, which I don’t understand at all and is very mysterious to me.

Filmmaker: In terms of conceiving of My Entire High School…. as a work of independent animation, what other film works inspired you, both animated and not?

Shaw: Mostly I was thinking of limited animation, like the first Astro Boy series, Speed Racer, and early Robotech. That kind of planar movement and limited expressions and super bold compositions. But now that it’s done, I look at it and I think it looks like Ralph Bakshi, or maybe early Tim Burton. I also see a lot of painting influences, like Sigmar Polke, Gary Panter, and Laura Owens.

Filmmaker: I remember several years ago you were working on another animated feature, The Ruined Cast, which you’ve obviously put aside to make this film. What happened to that project, and why, and how, did you shift gears into this one?

Shaw: Yes, In 2010, I participated in the Sundance Institute Writer and Director’s labs for a feature film project The Ruined Cast. Coincidentally, Lance Edmands who edited My Entire High School Sinking Into the Sea, and Kyle Martin and Craig Zobel who produced it, were also Sundance fellows at that time with their own projects. That’s how we all met. The Labs immensely helped me improve my social and interpersonal communication skills, which were woefully lacking due to a lifetime drawing comic books. I never went to film school, so the Labs and the experience working on The Ruined Cast really taught me everything I know about film. John Cameron Mitchell and Howard Gertler were producing The Ruined Cast, and they were trying to make it in a bigger way. We spent a great deal of time trying to get a cast to sign on in order to trigger financing, but as time dragged on that process became frustrating…. I kept thinking, “Why can’t I just go home and start drawing the movie?” And so I basically did. I went home and started making High School Sinking with Jane Samborski.

Filmmaker: Finally, while there are so many movies about earthquakes these days — such as the recent San Andreas — your movie seems to harken back to old-school Irwin Allen disaster movies, particularly The Poseiden Adventure. Why mash up the high school teen movie with the disaster movie? What about the latter genre appealed to you, and what are your own favorite disaster movies?

Shaw: Titanic came out when I was a teenager, and I really loved it, even though it was uncool to. I’d sit in class and imagine the school sinking into the ocean. I felt like this scenario would adequately dramatize the high school experience, especially when I came up with the idea of each floor being a different grade. That gave the whole script a video game-like structure. As for other disaster films, Akira has more disasters in it than any other movie, and that movie’s one of the wonders of the world. Also, while not exactly disaster movies, there were lots of anime where schools were attacked by monsters, from Sailor Moon to Urotsukidoji, and stuff like Assassination Classroom and Drifting Classroom where a school “drifts” through a portal into another dimension where it’s attacked by monsters. My favorite of these is the 1970s Devil Man cartoon series, created by Go Nagai, who gets a name drop in High School Sinking, and whose character designs inspired the librarian with the moose-like hair. Those Devil Man cartoons have great texture and energy. They have limited drawings, but it’s more powerful because it’s limited. That’s what I wanted High School Sinking to feel like, in that it’s like independent cinema: the aesthetic and the budget are connected and harnessed to make something more wild and powerful than a giant Hollywood movie.