The Past in the Present: Garrett Bradley on Time, Her Documentary about Activism and the Carceral State

Filmmaker‘s Summer 2020 cover story, Ashley Clark’s interview with Time director Garrett Bradley is being published online today for the first time to mark the film’s New York premiere this coming Sunday (with virtual screenings continuing until September 25th) at the New York Film Festival. For over half a decade, New York-born artist and filmmaker Garrett Bradley has been steadily building an impressively diverse yet tonally and stylistically harmonious CV. Bradley’s work has encompassed film, television and the gallery space; short, longform and multi-channel ventures; and ambitious explorations of the porous boundaries between fiction and nonfiction. It has often focused […] 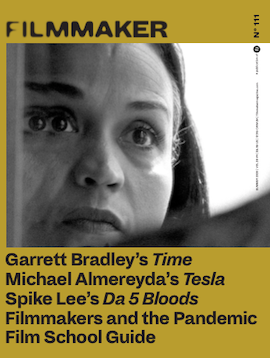 The Pandemic Diaries: Filmmakers on Art, Life, Filmmaking and Politics in the Age of Coronavirus

In April, as we began to put together the Summer, 2020 issue of Filmmaker, we asked directors, cinematographers, editors and other film workers to send us their thoughts on the quarantine and their own creative lives. The responses printed here were collected from April through mid-June — personal statements that speak variously to individual filmmaking practices, films halted mid-production, politics, art and life. “At Present, Many of Us are Living in the Conditions of My Speculative Fiction…”: Alison Nguyen on Her Isolated, Computer-Simulated Woman, “Andra8” “… Every Night I Dream That I am Shooting a Film”: DP Benoit Delhomme on Life […]