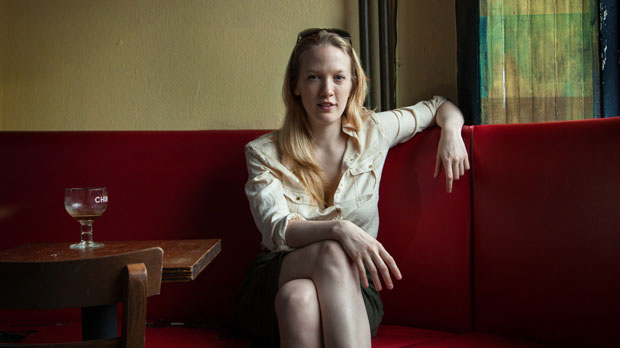 “That’s very short-film worthy.” Emily Carmichael has just heard my formerly best kept secret that I used to trade Pokémon cards with a German boy who lived across the hall from me when I was eight. “This is the short film,” she declares, barely a beat later. “You guys are playing together, and he gets injured and keeps saying something over and over again, and your parents grab you and say, ‘Make him say it in English, he’s speaking German,’ and you come into the room and it turns out to be the name of a Pokémon.”

Such is the quick wit of Emily Carmichael, an animator and filmmaker, perhaps best known for her Web series, The Adventures of Ledo and Ix. What began as three shorts that utilized the pared-down microcosm of novelty video games to explore loftier questions of interpersonal human nature, Ledo and Ix was picked up by Penny Arcade in 2011 and streamed online for a total of eight episodes. Its spin-off, RPG OKC, a hilarious take on online dating in the dial-up age, premiered at Tribeca this past May. A recovering playwright, Carmichael takes full advantage of the gaming format’s sparse aesthetics to display her natural knack for dialogue. “If I produced them in live-action, it would be very difficult to filter out all the signs and signals that were telling us whether or not we were in the real world,” Carmichael explains of forgoing her initial idea to present the shorts as mixed-media. “In the video game, I set the rules. Nothing is there to tell you what’s going to happen until I make it happen.”

While Carmichael frequently infuses fantastical settings with modern, everyday grievances in her animated work, her live-action shorts see her inverting the equation. In The Hunter and the Swan Discuss Their Meeting, her Sundance-screened NYU MFA thesis, a hunter recounts the beginnings of his relationship with his shape-shifting girlfriend to another couple with unforeseen ramifications. Working within the familiar double-date setting, Carmichael leaves the audience at ease, with little desire to do anything but enjoy her transcendental injections. “I’m interested in the poignancy that comes with exploring the contrast between fantasy and reality, and the power of the imagination,” Carmichael says of her thematic inclinations. “Showing somebody is sad about a circumstance is one thing, but showing someone is sad about a circumstance and demonstrating what they want instead is such a more powerful way to illustrate what they’re lacking in life.”

Carmichael continues to explore such tropes, albeit in all new environments, in the two feature scripts she has in development. The Licking County Giants, which was optioned by Fox Digital, follows a down-and-out therapist who becomes the baseball coach at an eating disorder rehabilitation facility. It looks to shoot this summer. Not one to rest on her laurels, Carmichael is also prepping the IFP Emerging Narrative and NYU Purple List inclusion Arrow. The script, to be shot by her now hot Hunter d.p., Ben Richardson, is an ambitious, touching, not quite post-apocalyptic, sci-fi tale about a genetically engineered young woman, her crime-riddled guardian and a reptilian humanoid in their accidental quest to save the world. — S.S.