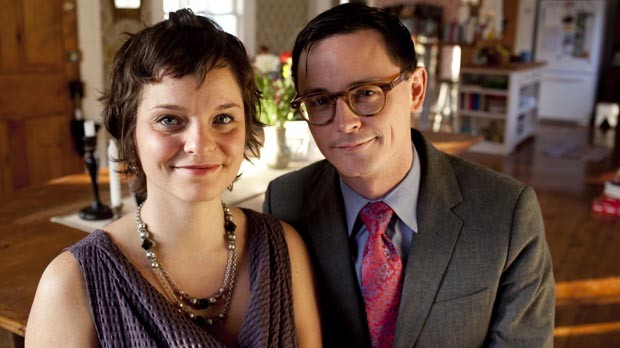 In 2000, Brian Frye was introduced to home movies from the Nixon White House. Some 500 hours of footage had been confiscated by the FBI during Watergate investigations and languished since. Even though he only had the chance to see a couple of reels, the footage stuck with Frye. Later, in law school, Frye was “looking for ways to occupy the little bit of free time” and wrote an article for Cineaste musing on their “comprehensive account of the hubris, tragedy and banality of [Nixon’s] presidency.”

After future wife Penny Lane prodded Frye to do something about his interest, Lane recalls that they “decided to take the financial plunge to get the first batch of telecines made in 2010.” After viewing the footage, the couple decided to use it as the basis of a film. The result is Our Nixon, an archly evocative compilation documentary solely composed of pre-existing video and audio sources. Silent footage from three of Nixon’s core staff — H.R. Haldeman, John Ehrlichman and Dwight Chapin — is supplanted with careful audio snippets of the events and ironic musical counterpoints from the likes of The Carpenters (“the exemplar of square America,” Lane notes). The title underscores the pathos; after leaving the White House, Nixon would never speak to his fatally loyal aides again.

In an already-crowded field of Nixonia, Lane and Frye’s film, currently in post-production, stands out for its total commitment to primary sources not already mined for small drops in Nixon’s face and dazed first impressions of China. “Brian loves to shoot, but I don’t,” Lane says. “I haven’t held a camera in many years. We both love to use archival stuff.” Frye cites as an influence Emile de Antonio (whose Point of Order! ironically compresses the Army vs. Sen. Joseph McCarthy hearings), while Lane notes they’ve “been very heartened in terms of our project by the number of really awesome, primarily archival films,” including the unexpected recent success of Senna.

Our Nixon, which they plan to introduce to the festival circuit by fall or winter, isn’t all they have planned for the rediscovered footage. “At a bare minimum, what we would do is take all the home movies and compress them for archive.org, because part of the project was preservation and access,” Lane notes. In the future: The Rules of Evidence, a co-directed and equally archival documentary on how the legal system makes use of film and video in trial. Lane is also on her fifth year of work on NUTS!, an animated documentary about early 20th century con man John Romulus Brinkley, who built his fortune through goat testicle implants. “I’m not sure at what point we decided it was a good idea to work on three films, but it happened and that’s happening,” Lane laughs. “Someday all these movies will be done.”