Spoiler Alert! How to Tell the Story Without Telling the Story 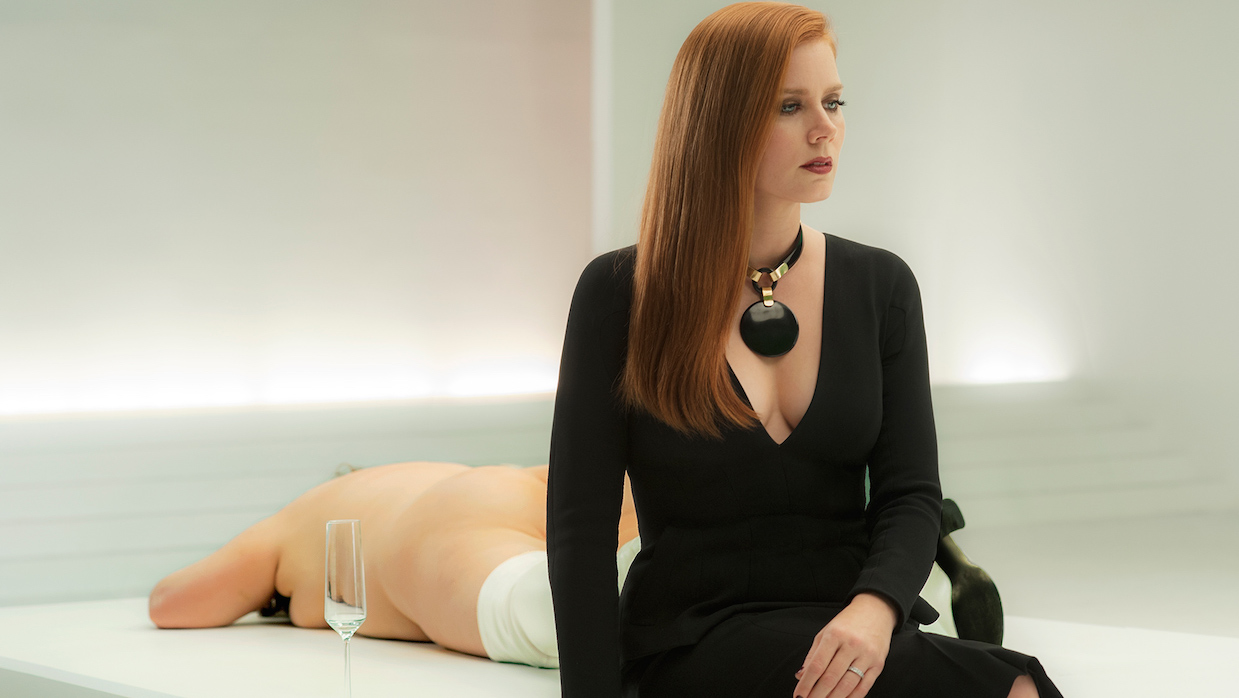 by Stephen Garrett
in Distribution, Filmmaking
on Mar 23, 2017

Get Out, nocturnal animals, The Discovery, Trailers

(WARNING: There will be spoilers)

When Charlie McDowell’s mysterious film The Discovery debuted at Sundance last January, its distributor, Netflix, premiered a teaser trailer along with it — a good strategy, considering the film’s intriguing premise (that science has proven the existence of an afterlife) and its abundance of plot twists. No spoilers, please!

A beautiful piece of promotion for a dark sci-fi romance ostensibly about life after death but essentially about a person looking for his soul mate, the teaser uses Roy Orbison’s “Only the Lonely” for an 88-second music-driven montage (a song not used in the film but well-suited for the advertising).

Its clever construction starts conventionally enough — the jangly tune accompanies shots of Jason Segel and Rooney Mara in what looks to be a budding relationship — until the trailer editor warps one of the shots while distorting the music, signaling that the cute amorous story is quickly turning sour. Intriguing images of cultish gatherings, body snatching from hospitals, and off-the-grid lab experiments soon follow. “People are just going to keep killing themselves,” Segel says flatly to Mara towards the end — the only line of dialogue we hear. What the what? Cryptic and compelling. Great stuff.

Available for streaming as of March 31, The Discovery also got a somewhat more traditional trailer, which elaborated on the premise without giving too much away. In fact, it plays up the film’s most sensational plot point: that the existence of an afterlife has inspired millions to commit suicide. And it uses as its fundamental structure just the first 15 minutes or so of the film, an interview with the discoverer of the discovery (Robert Redford) explaining and defending his scientific proof of an afterlife.

What’s interesting is that the trailer then sprinkles clues to the actual story throughout those opening remarks. The real story (spoiler alert!) is that the afterlife is really just a reset button on an actual life, a sort of eternal return where people get a do-over for the regrets in their life without really knowing, of course, that they’re reliving them. (Think Groundhog Day, but without the self-awareness.)

And so, as Redford defends his findings, and the music gets more and more dramatic, the images of Jason Segel get more frenetic, some of them repeating, speeding up, going in reverse, or showing alternate takes of a specific action he makes (like opening a door). So, in a way, the trailer actually reveals the film’s big plot twist without actually explaining it. It shows, not tells, and does so without context. It’s a nice way to honor the story while sidestepping it.

When it came out in February, Get Out lit up the internet with newly-minted fans and fawning critics imploring viewers: DON’T REVEAL THE PLOT TWISTS. When the film’s star, Allison Williams, did the talk show circuit, she made a point of not telling more than the first 30 minutes because THERE WERE TOO MANY PLOT TWISTS.

On one level, this is great marketing: “Trust us, you’ll love the film, we just can’t tell you anything about it.” And that would be great if the distributor didn’t need to make a movie trailer.  But that’s a fundamentally unviable luxury in this day and age. People want to see footage before they buy a ticket. So how much to reveal?

As with The Discovery, the teaser approach is very helpful. Keep it short, just convey mood and atmosphere, and hint at a storyline. But Jordan Peele’s low-budget surprise hit Get Out, despite its studio release, probably didn’t have a huge amount of marketing muscle behind it. (I’m sure the filmmakers and marketing execs didn’t want to put out too much material, either, and risk overexposure.) So it got one piece of advertising, and that was the trailer.

This is where the inherent structure of a trailer can actually be an asset: it’s a piece of advertising made up of images that aren’t necessarily in chronological order. It’s not even beholden to narrative fidelity. In other words, trailers are full of lies. They lie to tell the truth.

What’s really fun about the Get Out trailer is how many plot twists it shows without giving anything away. For those who haven’t seen the film, the basic setup is simple: a white woman named Rose (Williams) takes her black boyfriend Chris (Daniel Kaluuya) out to an affluent suburb to meet her liberal parents (Bradley Whitford and Catherine Keener), who seem eager to hypnotize him. Also, the other black people they meet at her parents’ house seem…off. This is technically the only part of the plot that the trailer explains, too.

What the trailer doesn’t show is this (spoiler alert!): the woman is a honey trap for her parents, the ringleaders in a 21st-century slave trade who sell off young, strong black bodies as vessels for the surgically transferred brains of old white people — allowing them to extend their lives.

The first third of the trailer is almost fanatically faithful to the chronology and events of the first 30 minutes of the film. And then, in the second part, the trailer intercuts talk of hypnosis with an afternoon house party and a phone conversation about missing black people. This section climaxes with an odd conversation between Chris and a black guest who suddenly freezes, gets a bloody nose, then snaps and starts screaming, “Get out!” (Always good to use the title in your trailer.)

In the back third, the few lines of dialogue includes the classic (and racially-charged) TV ad line “A mind is a terrible thing to waste,” a motto of the United Negro College Fund that dates back to 1972. On first blush, this quote seems cute but not revealing. After learning the film’s body-snatcher plot, though, the seemingly throwaway line becomes a brilliant summation of the entire movie — unbeknownst, of course, to the virginal viewer. It’s like an Easter Egg within the marketing.

At this point, the trailer’s images actually pretty brazen about showing elements of the plot twists (the parents’ betrayal, the kidnapping, the surgical instruments, the neo-slave auction, Chris escaping). But no context is given, so they don’t really feel like spoilers.

In the back-end, two key dialogue lines play up the film’s ideas and not the plot. “If there are too many white people, I get nervous,” says Chris. Cut to a black maid, who laughs eerily and then says, “No,” repeatedly and more intensely, while being intercut with quick action shots almost exclusively from the very end of the film. And then, going into the title, we hear once again, “The mind is a terrible thing to waste.” It’s a fantastic way to wrap up the trailer, by putting the film’s ideas upfront while muddying the narrative waters with a flurry of out-of-context images.

In the film, Amy Adams plays an emotionally numb art dealer who gets a manuscript in the mail from her ex-husband (Jake Gyllenhaal), a novelist. The book is dedicated to her, and tells the story of a man (also played by Gyllenhaal in the movie-within-a-movie) who is first emasculated and ultimately devastated when some redneck thugs menace him and his family on an empty highway, then kidnap, rape, and murder his wife and daughter. Adams is deeply affected by the novel, especially since she broke her husband’s heart and destroyed their marriage after she got an abortion without telling him.

Focus Features made two trailers for the film, both very similar (they use the same music, plus many of the same lines and images). Yet there’s one telling difference. The first trailer specifically mentions the book and even shows a quick snippet of the movie-within-a-movie to reveal that the film will be dramatizing the events of that book. The second trailer doesn’t even mention the book.

Neither trailer, though, mentions the fact that Gyllenhaal plays dual roles, both the novelist as well as the main character in his novel. And that’s a key distortion the advertising exploits shamelessly. So basically the story of a woman reading a book, plus the flashback events of that woman in a sour marriage to an aspiring writer, get completely blended together with the book’s lurid story of sex, betrayal, and violent vengeance. What a magnificent distortion!

The lie is borderline forgivable, since the marketing department probably decided that the cleanest, simplest way to showcase all the juicy moments in the movie was to blend the book’s salacious moments with the much less sizzling life of Amy Adam’s guilt-ridden art dealer. Still, though, viewers might be surprised when they realize that Michael Shannon, Oscar nominated for his role in Nocturnal Animals, is actually playing a character in the novel and doesn’t even exist in the film’s real-life frame.

Then again, why spend precious ad time explaining the difference? Trailers don’t care about spoilers or distortions. They care about selling. And the best ones reveal everything and nothing at the exact same time.