“VR is Not Another Kind of Filmmaking”: Baobab Studios’ Eric Darnell on Animated VR 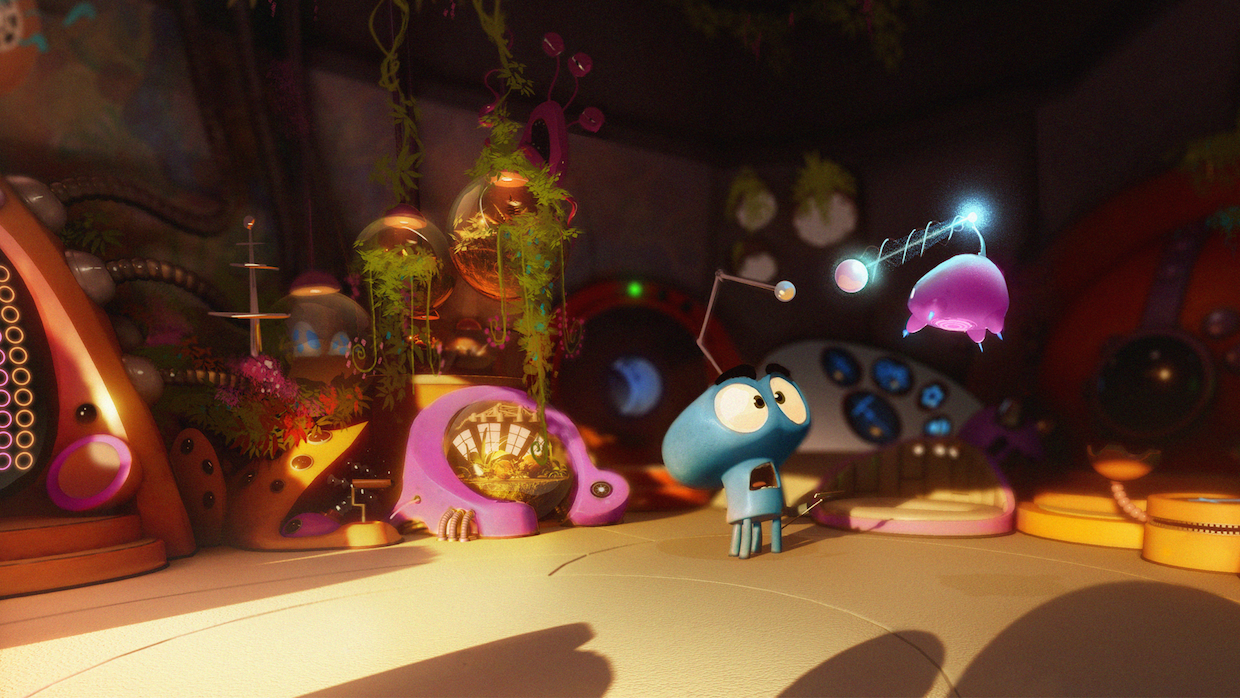 by Randy Astle
in Directors, Filmmaking, Interviews
on Jul 27, 2017

If you’d mentioned Eric Darnell’s name a few years ago, most people would have thought of the Madagascar films or the Penguins of Madagascar spin-off, all of which he co-directed while at DreamWorks Animation, where he also directed Antz and contributed to films like The Prince of Egypt and Shrek. But think of him today and you’re just as likely to conjure up images of bumbling aliens, a fluffy and resourceful bunny or a multicolored crow, and all in virtual reality. That’s because Darnell is the co-founder and chief creative officer at Baobab Studios, which in just two years has established itself as one of the United States’ best producers of animated VR. The studio, though young, has produced a string of impressive projects: Invasion!, which won one of the first Emmys for interactive content, Asteroids! (pictured above), and the upcoming Rainbow Crow (which I interviewed Baobab’s CEO Maureen Fan about at this year’s Tribeca Film Festival). The alien characters from Invasion! and Asteroids! will be featured in a traditional feature film co-produced with Roth Kirschenbaum Films, while Rainbow Crow, which will unfold in multiple chapters, promises to bring VR closer to an animated feature than anything we’ve yet seen.

Darnell thus has extensive experience in both traditional filmmaking and the rising VR industry, which he’s helping to shape as it matures and moves toward a mass market. I’ve personally been impressed with all their work, and I even used Invasion! on a Google Cardboard to first introduce my children to VR. As higher-quality viewing equipment improves and drops in price enough to become more ubiquitous, top-tier animation like Baobab’s will be ready to access the virtual reality family market.

I talked with Darnell about his work with Baobab, how VR differs from film and where he sees the industry going next.

Filmmaker: It’s been a while since you made the move from DreamWorks to Baobab, but can you revisit what prompted your decision to strike out on your own? Was moving into virtual reality the focus from the very beginning of that process?

Darnell: I decided to leave DreamWorks when they shut down the studio in Redwood City. I wasn’t sure what would be next for me. I was introduced to Maureen Fan, at that time a VP at Zynga, through Glenn Entis, who cofounded PDI/DreamWorks Animation and was CTO of Electronic Arts. Maureen had always wanted to start an animation company, but wanted to be part of creating an industry rather than entering an already mature one. When VR came, she felt it captured the heart of animation in a new way, immersing you fully in that fantastical world. I didn’t know much about VR, but when I put on a headset for the first time I was blown away. A few days later we decided to form Baobab.

Filmmaker: In general, what’s been the most rewarding thing about your work at Baobab thus far?

Darnell: For me, it’s always about doing great work that connects with a broad audience. The content that we’ve created so far has done that. Invasion! won a Daytime Emmy for Best Interactive, which helps bring more people into VR.

Filmmaker: What’s different about working in VR versus traditional projects like the Madagascar films? Story and character remain paramount in Baobab productions, but logistically and perhaps even creatively you must have made some adjustments.

Darnell: Huge adjustments must be made. We all quickly learned that VR is not another kind of filmmaking. In fact, it is a unique medium. The immersive nature of VR and the potential to interact with the characters and the environment offer brand new challenges for storytellers and a very unique experience for the audience. For example, we experimented with different techniques to draw the audience’s eyes to where we want them to look. Also, we have the characters react to the viewer, something you can’t do in a flat film.

Filmmaker: With the announcement last fall of a feature film based on Invasion! you seem to be indicating that Baobab Studios is platform agnostic. Are you planning a robust future for traditional filmmaking there?

Darnell: Baobab’s focus is VR. That said, a good story is a good story. If we create stories that transcend a specific medium, that’s great and we can partner with others.

Filmmaker: I was impressed by the portion of Rainbow Crow shown at Tribeca this spring. How is that project pushing the studio and your work in new directions?

Darnell: It’s a much longer experience. That introduces significant challenges as we try to tell great stories and tell them well, with characters that audiences can fall in love with. Rainbow Crow also has a much different look and feel than Invasion! or Asteroids! as we are working toward making an experience that, in effect, allows the viewer to step into a storybook world.

Filmmaker: You mentioned the length. Rainbow Crow was one of many animated VR pieces at Tribeca this year that was a portion of a much longer project still in development. What are your thoughts about feature-length VR? Is that the direction a lot of the industry is headed, and if so how will distribution and monetization be affected?

Darnell: The length of content in VR really depends on how long audiences can remain in headsets. Currently, on average, most viewers spend less than ten minutes in a VR headset. As the hardware and content improves the likelihood of seeing feature-length VR increases. The second consideration is cost. Triple-A games and high-end features are expensive. There is every reason to believe that high-end feature-length VR content could cost even more.

Filmmaker: Besides length, what other changes are you seeing in the world of animated VR? Where do you think the industry will be in 3-5 years?

Darnell: The hype for VR was huge, but many consumers were underwhelmed when it finally arrived. Right now, we are in “the trough of despair.” This is not uncommon when new technologies come along. In the case of VR there are a few issues—uncomfortable headsets, high cost for higher quality hardware, and sparse content with much of the content that is out there being of low quality. All of these issues will be resolved over time. But it may take a while. It’s a bit of a chicken and egg problem. People don’t want to buy headsets because of considerations like cost and availability of lots of quality content while potential content funders are hesitant because there are not enough headsets out there to make up for the cost of production. That said, it’s only a matter of time before VR climbs out of the trough and into a strong and viable marketplace. In the meantime, we will be part of the solution, creating the content that draws new audiences to this medium.