“Create Something That Is Undeniable”: Director Dee Rees Talks Mudbound And Life After Pariah at IFP Week 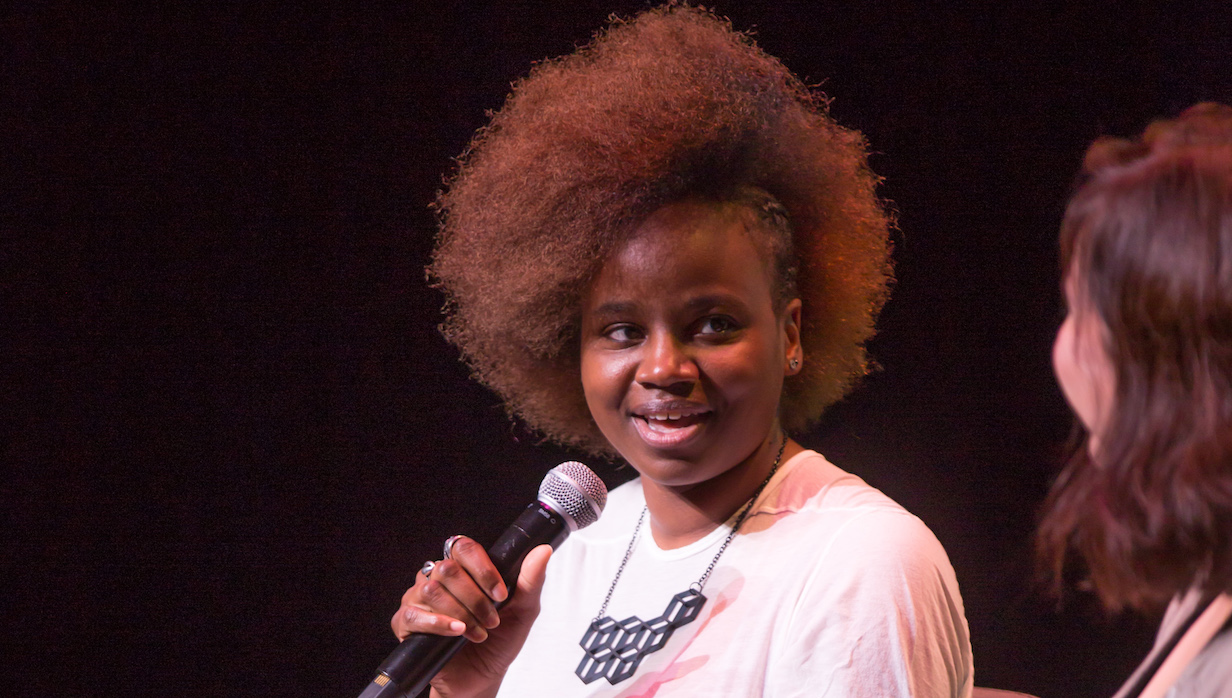 The highpoint of Dee Rees’ IFP Week appearance was a complete surprise. There to discuss her latest feature, the Sundance fave Mudbound (hitting theaters and Netflix on Nov. 17) with Buzzfeed film critic Alison Willmore, the Pariah filmmaker waxed nostalgic over one of the films that most inspired her to take up the craft: Sugar Cane Alley, Euzhan Palcy’s 1983 César-winner about life in a small village in Martinique during the 1930s. Rees’ mother had it on VHS when she was a kid, and she would watch it over and over again. “That was before I understood what a director did,” she said.

Minutes later, Rees fielded a question from one of the audience members. It turned out to be Euzhan Palcy herself. Palcy — whose A Dry White Season (1989) made her the first black filmmaker to direct an actor (Marlon Brando) to an Oscar nomination — had flown in from France, and was happy to surprise the audience, none more so than Rees. “I’m going to geek out now,” Rees said as she stopped the Q&A to embrace one of her heroes.

Since her feature debut, Pariah, came out in 2011, Rees has followed in Palcy’s acclaimed footsteps. That film — about a black teenager struggling to come out to her parents — was a Sundance hit, too.

Mudbound is Rees’ first theatrical feature since Pariah. But she wasn’t laying low. Like many filmmakers who make their name with an out-of-nowhere indie, Rees was able to parlay her hit film into a steady existence.

Right after Pariah, Focus Features, who distributed it, gave Rees a job working on another script, about a Memphis cop trying to solve a murder. That project never went into production, but she was able to get another gig, working for HBO on a film about blues singer Bessie Smith — a project that had spent years in development hell. “I was like, ‘Yeah, a chance to tell another story about a black, queer woman,’” she said. When Rees finished the script, HBO asked if she wanted to direct it, too. The result was 2015’s Bessie, starring Queen Latifah in the lead.

“Pariah was the thing that enabled me to keep working professionally,” Rees said. “It started that slow catapult to where I was always working and always keeping myself busy. As an independent filmmaker, you have to write yourself into the picture. If I wasn’t a writer, I don’t think I would have gotten the shots that I’ve gotten, because I couldn’t literally create that space for myself.”

Mudbound is a very different beast than Pariah: a period film with big names. Jason Mitchell and Garrett Hedlund play men who return from World War II and find themselves dealing with racial strife in the Mississippi Delta. Carey Mulligan, Jason Clarke, Jonathan Banks and Mary J. Blige round out the supporting cast. Rees wanted to get the era right.

“When people hear ‘period piece,’ they think about costumes. But they don’t think about the faces. For me, faces have to feel period,” Rees explained. She worked closely with her casting director, Billy Hopkins, to make sure her big stars wouldn’t look out of place. “I really wanted people who looked like they only ate 500 calories a day. Sugar is a luxury, coffee is a luxury. They had to look like they’d never seen a goji berry in their life. They had to look of the land.”

Reviews of Mudbound have remarked on the timeliness of a period film about racism, whose power has grown even stronger in the wake of Charlottesville and other Trump-era events. “Any work comments on the time it’s made. Whether it’s set in 1840 or 2040, we’d be talking about 2017,” Rees said. She remembers eavesdropping on two journalists talking about her film while at Sundance. “They were saying, ‘Yeah, Mudbound was good, but the Klan scene was over-the-top.’ Now those two guys will know the Klan scene was not fucking over-the-top. This shit still happens.”

Like another IFP Week 2017 guest, Barry Jenkins, Rees has resisted “selling out,” ignoring the cliché that all indie filmmakers are simply working their way to the next Marvel job. She did, however, almost have a meeting with producers of a big genre movie, whose title she declined to reveal. Her agent had set it up, but the day before she had a change of heart.

“I was trying to think of ways into the material. I was trying to give it this artful, symbolic meaning,” Rees explained. Finally she realized it wasn’t a good fit. She called her agent and canceled the meeting. “He probably hated that, but I just knew at that point that I had put so much work into making Pariah happen, got so many grants, had so much support from so many people on Kickstarter, that it would have felt like a slap in the face. ‘Oh, we helped you make Pariah, then you do this next?’ It was affirmation that [a project] has to mean something. It doesn’t have to be message-y, but it has to be material that means something. I can’t inject it with ideas that aren’t there.”

Rees isn’t averse to going big. “I want to do sci-fi, but I want to do my own sci-fi. I want to do my own Star Wars,” Rees said. In fact, she recently directed an episode of the forthcoming show Philip K. Dick’s Electric Dreams, which stars Vera Farmiga and reunites her with Jason Mitchell. She’s also working on a horror film, having been inspired by Get Out’s ability to fuse genre with commentary. “Working is a two-year, three-year thing. You have to love it. Otherwise you’re going to be phoning it in after six months. There’s got to be something that keeps you coming back.”

Rees implores budding filmmakers to follow her path, which has involved not only sticking to her guns but making sure she has a diverse set of employable skills. “If you can write, write. That’s a way of creating content for yourself to make,” Rees said. “If you can edit or if you can shoot, then shoot or edit. You’ve got to figure out some craft in the business that will get you in. For me it was writing.”

She also thinks nascent filmmakers should meet others like them. “When I started out, I was not of this industry. I didn’t know anybody. I didn’t have any connections. For me, it was about finding those relationships,” Rees said. “IFP was one way. I got to meet with producers and other filmmakers. The Sundance Institute — I went through the labs there. You can make relationships on sets, so crew for other people as much as you can. Crew for artists you respect. By crewing for other people, you meet crew. Then you can create something. Start with a short. Use your credit cards, which is probably bad advice. Write grants and use your credit cards, because no one’s going to come looking for you. You have to create something that is undeniable.”