“Seeing the Seams Is a Part of the Art”: Editor Taryn Gould on Narcissister Organ Player 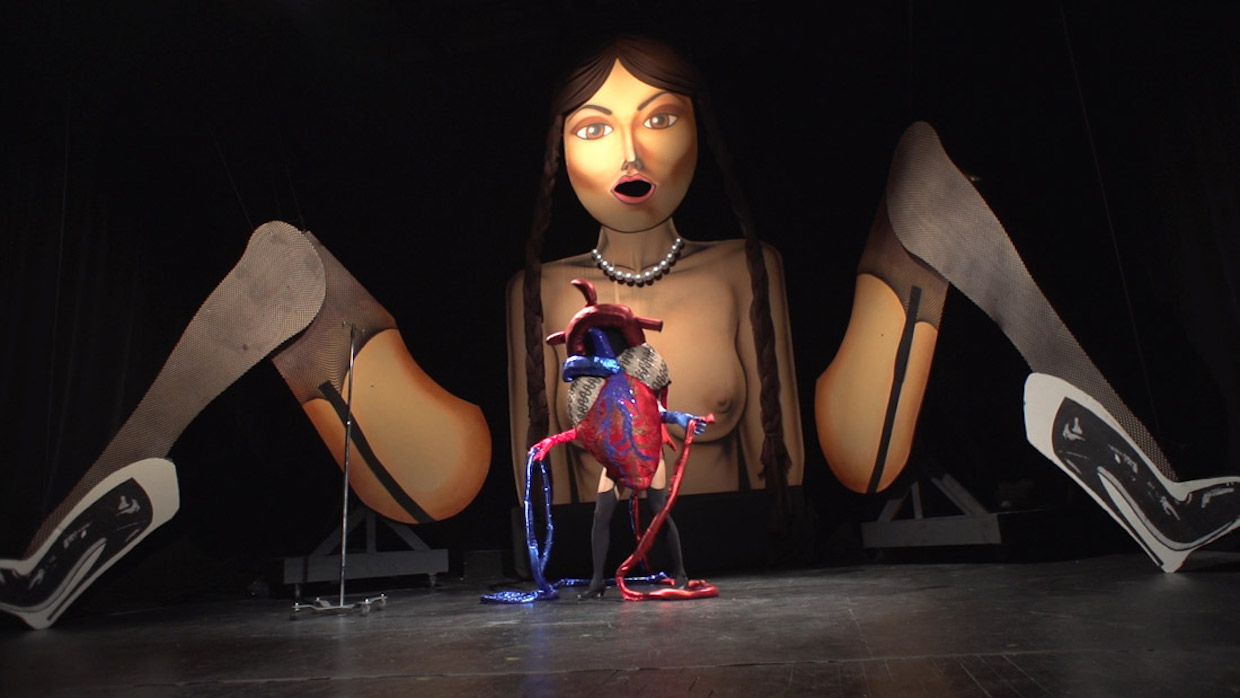 Narcissister is a Brooklyn-based performance artist who appeared on America’s Got Talent to, as her bio puts it, “trouble the popular entertainment and experimental art divide.” Her feature film debut, Narcissister Organ Player, is a hybrid of performance art film and personal documentary on her relationship with her family. Narcissister tapped filmmaker Taryn Gould to edit the film. Below, Gould discusses the importance of in-progress screenings, how editing the film has impacted how she thinks about her mother and the question of whether or not to show Narcissister’s face in the film.

Gould: My cousin Jennifer Jaffe is one of Narcissister’s oldest friends in New York. When Narcissister told her she needed an editor for this project, my cousin recommended she reach out to me, and it all happened very quickly from there. We had a half-hour phone conversation and then she had someone drop the drive off at my apartment. Over the course of the project I ended up taking on a larger role as producer.

Gould: The prospect of the film was very exciting to me. It had the potential to take Narcissister’s challenging body of work and to illuminate that work with a relatable and elemental story of familial love and trauma. The goal was to have a film that would be true to the enigmatic nature of Narcissister but also move and surprise people who wouldn’t necessarily be inclined to enjoy one of her performances or to look beyond the nudity and erotics for deeper meanings.

Gould: Bara Jichova Tyson and Narcissister came up with the film concept to have interviews with the artist, her performances and family photographs to be the elements that would be used to make the film. When I came on to the project, Narcissister and I mapped out the points in her personal history that we wanted to share and then the points in her mother and father’s history that we wanted to share. After that was the more difficult process of placing her performance work in those arcs in a way that would augment and illuminate the work while also furthering the family story. The film was a unique challenge. Besides having to work as a film on its own merit, it also had to be in itself a Narcissister work that is consistent with her output as an artist. A point of discussion was how much to reveal her face while showing old family photos, what the balance should be between character and real individual. You can see in the film what we finally decided on.

We had two work in progress screenings over the course of the edit with questionnaires to get people’s feedback. We tried to have a mix of people who knew Narcissister’s work and others who did not. Those screenings were incredibly helpful to gauge people’s reactions, and we made a lot of important decisions based on the feedback. We also had a wonderful film advisor, Lewis Erskine, who screened the cut with us at various points, offering guidance and invaluable insight. Additionally Matthew Akers, who is a fellow filmmaker and friend, ended up having very critical feedback that really shifted the introduction.

Gould: I went Newhouse School at Syracuse to study film. I had a great mentor there in Tula Goenka who had worked as an editor with Mira Nair and Spike Lee. After school I worked for a few start-ups and eventually worked for Atlantic Records shooting, editing and directing in-house content. From there, I directed and edited music videos. Meeting Danny Clinch on an Atlantic Records video shoot began a really fruitful 10-year working relationship. I was able to really sharpen and develop both my editing and filmmaking skills. I have edited short films and feature documentaries with him, and we will be co-directing a film together this spring. As far as influences, the most beautiful film I have ever seen is Victor Erice’s The Spirit of the Beehive, and I was lucky enough to see it in college. It still shapes and shakes my imagination. I really admire the filmmaking of Agnes Varda, Alma Har’el, Lucy Walker, Werner Herzog and endless other. As far as editing, I am constantly moved and inspired by Enat Sidi. She is an incredible editor.

Gould: I used Premiere. The project had already been ingested that way. I am more of an Avid editor if I have the choice.

Gould: I think I edited about 40 versions of her performance piece “Hungry,” which is in the first 20 minutes of the film and is a performance filmed specifically for the doc. We knew we needed expository information revealed there, but it just took a really long time to figure out what those sound bites should be. We spent about a month trying to work her mother’s immigration story into that piece. The work in progress screening revealed that that was not the right choice. Finally the right sound bites emerged and now it feels obvious, as it always does, after you figure something out.

Gould: The amazing thing about Narcissister’s work is that it’s all made by hand and there for you to see. Seeing the seams is a part of the art, so no VFX necessary for this one.

Gould: I think the film will encourage people to process their own relationships with their parents. More than that, to process their parents’ relationships to their parents and so on. It certainly has for me. I have reflected more deeply on how my parents experiences as children have shaped who I have become and how I express myself. My desire to record my parents personal histories and memories feels more urgent now. I was also deeply moved by Narcissister’s candid childhood memories of her mother’s body. There is the memory of a tampon string hanging out while her mother was stretching naked, or the way her mother wiped herself when she peed. Many of us have these memories of our parents and their bodies before shame sets in, and we repress them. Among many other things, Narcissister’s work to me challenges repression and it was really interesting to dig down and remember my mother’s body, the one I came from, when I was a little girl and she wasn’t ashamed of me seeing it. It made we really appreciative of the bravery of Narcissister’s work and grateful for the opportunity to be a part of the film. Equally, my admiration for her mother just expanded exponentially throughout the process. Sarah Lumpkin was such a tough, loving, brilliant, open and expressive woman. I never met her and I will never be able to, but the film we created makes me miss her terribly.