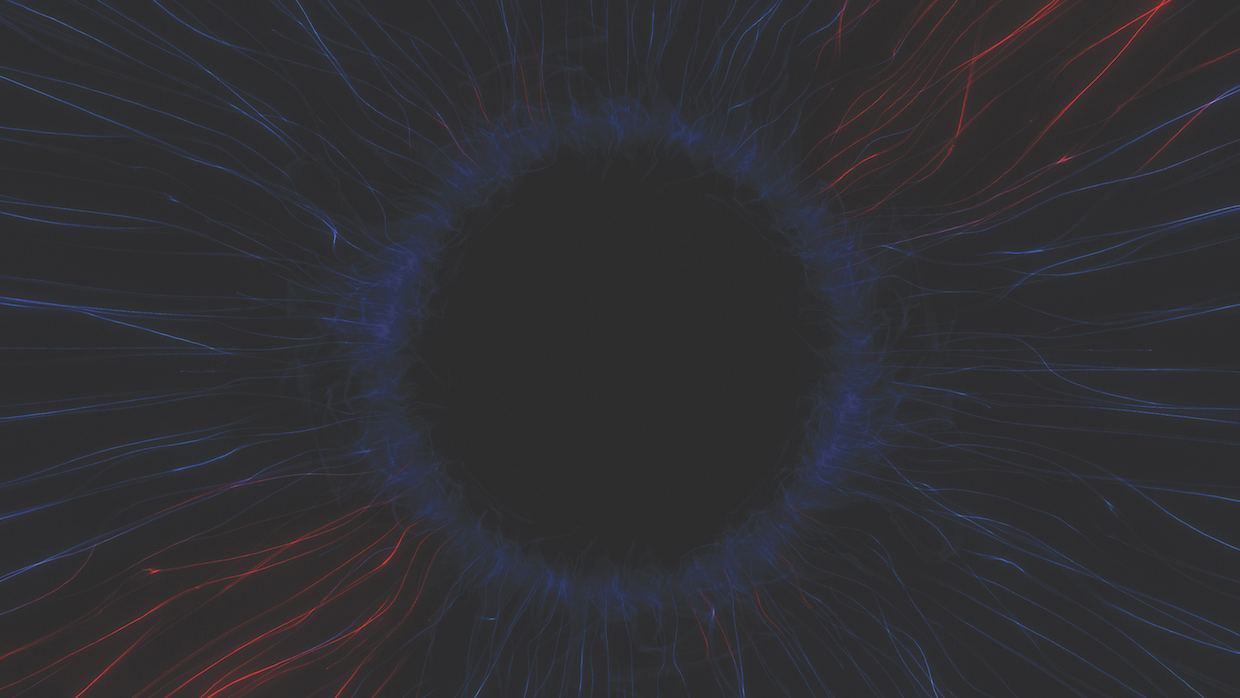 by Meredith Alloway
in Directors, Features, Interviews, Issues
on Mar 8, 2018

Filmmaker Eliza McNitt’s second VR film, SPHERES: Songs of Spacetime, has made history as the first VR film to sell at Sundance. CityLights, a VR financing and distribution company, acquired the project as a three-part series for a significant seven-figure deal. Narrated by Jessica Chastain, SPHERES is inspired by the recent discovery that gravitational waves make their own music, and it visualizes the collision of two black holes that produce these movements. With the Oculus Rift headset and hand controllers, the viewer uses their voice and body to interact with the cosmic landscape, drawing stardust circles while being pulled into celestial 360-degree waves. When viewers descend into the black hole, it’s nothing short of mind boggling. A lush score from Kyle Dixon and Michael Stein of Survive, the band known for their work on Stranger Things, adds to McNitt’s neopsychedelic vision.

“The ambition and generative nature of the vision for SPHERES perfectly fits with our mission to bring content to broader audiences and showcase the types of experiences only VR can deliver,” CityLights cofounder Joel Newton said in a statement to Variety. Indeed, VR is the perfect medium to explore the subject of space, and McNitt brings a real poetic artistry to the work, informing her exploration of quantum mechanics with a feeling of existential grandeur.

A few days after the deal was announced, Filmmaker sat down with McNitt over sushi in Lower East Side Manhattan, stealing her away from work on the second episode of the series. Sporting her signature wide-brimmed hat, she was excited to take a breath, the past few weeks having been a wild ride. Jumping from Los Angeles, where her producer Jess Engel lives, to Paris, where her team of designers at Nova Lab works, she admits she hasn’t spent more than a week in her New York apartment this past year.

“Science is in my bones,” McNitt says when asked how her fascination with the cosmos began. McNitt’s grandfather was a chemical engineer at MIT during World War II, and she was inspired by his dedication to using science to better humanity. “I’ve always looked at the ways things work,” she says. In high school, interested in why we wash our apples, she traced the migration of pesticides through the pollination pathway of honey bees. Her first project went on to be a top winner at the Intel International Science and Engineering Fair. McNitt then studied at NYU’s Tisch School of the Arts, where she made multiple short films continuing her fusion of science and narrative, one of which was the winner of an Alfred P. Sloan grant.

Her first venture into VR was Fistful of Stars, an experience that followed the Hubble Telescope through space. McNitt forged a vibrant creative partnership with her SPHERES producer, Jess Engel, who has an impressive track record in the VR world. Engel was previously the director of original content at Within, Chris Milk’s VR venture; an executive producer at startup Virtualize VR; and now has started her own independent producing company, Crimes of Curiosity. While pitching Fistful of Stars, McNitt was continually told it was too expensive and there were too many points of failure, especially for a first-time VR filmmaker. After McNitt met Engel at an Oculus party at Sundance and proposed her concept, Engel was the first to say, “Let’s do this.” Months later in 2016, the project screened at BRIC! Celebrate Brooklyn and was the largest communal VR event to date.

“This is an industry that’s dominated by powerful women,” says McNitt, whose collaborators include not just Engel but also Yelena Rachitsky, creative producer at Oculus, which will release SPHERES down the road, and Lisa Watts, McNitt’s mentor and partner at Intel. McNitt thinks that because VR is such a new medium, it lacks the history of misogyny and prejudice that restricts Hollywood and other sister industries. “It’s about raw, pure talent,” she stresses. After spending four backbreaking days on their feet at CES (the Consumer Electronics Show) and screening Fistful of Stars for thousands of people, Watts — who McNitt dubs her team’s secret weapon — turned to her and asked, “What do you want to do next?”

McNitt had the beginnings of SPHERES on her mind after wrapping Fistful of Stars, but it was her reaction to what happened in the fall of 2016 that propelled it forward. “The day after the election, I left my job, I bought a ticket to Japan, and I started this project. As the world around me fell apart, I began to wonder about going to the darkest edges of the universe  to look back on earth.” Responding to the political and cultural darkness of the past year, she wanted to build an experience that would encourage participants to examine their own existence — and, indeed, falling into a black hole prompts people to acknowledge their own ephemerality. “It puts life and the universe in perspective. There’s something so beautiful in the fragility of our planet.”

Watts and Intel helped fund the beginnings of SPHERES, and then McNitt then got a call from Dylan Golden, creative executive at Darren Aronofsky’s Protozoa Pictures. Fistful of Stars had impressed them and they were curious about what McNitt was working on next. “They grilled me on my process and virtual reality filmmaking,” says McNitt of her meeting with Aronofsky and the company. When Aronofsky asked, “What is the hero’s journey?” McNitt realized the innate narrative in the scientific vision she was already creating: “I am telling a story, and there is a hero, and the hero is you.”

Protozoa came on board, Engel joined to help move production along, and McNitt began to mine for the arc in the script. Simultaneously, she was investigating what the VR experience would actually look like. There are no images of the inside of a black hole, only theories. McNitt turned to several scientists, including a session with black hole specialists at Columbia University. “What color is a star? When does it enter a black hole? What color is the singularity?” McNitt remembers their advice: “Make it strange.”

McNitt took her research and began to work with her team at Nova Lab. She assures filmmakers unfamiliar with the medium, who may not understand technically how VR is built or the process of working with a team of developers, that it’s no different than being with a crew on a set with actors. “As a director, you’re leading a team,” she says. For a project, McNitt will create a moodboard, an art director will create style frames, they’ll storyboard every moment in 360 and then the team will bring it to life. She then puts on a headset, watches the build — and it’s probably not what she wants. She’ll give them direction and they’ll push the visuals and test things. Although it’s similar to working with actors, she does admit, “technology takes longer,” but that “like all filmmaking, this is a process of failing.”

The actual piece was built within Unity, a real-time game engine that allows the viewer to move around a space with 360 degrees of freedom. McNitt’s greatest strength with SPHERES is her ability to showcase such wild visuals while sticking to a narrative structure. In the first scene of the experience, you witness the birth of the star and have six degrees of freedom where you’re able to move about in the landscape. When the star explodes into a supernova and a black hole is formed, you lose that freedom and are frozen as you’re descending into the gravitational pull. McNitt focused on building the story into the interactivity, reminding the viewer of their personal odyssey.

When asked about this new chapter of virtual reality, McNitt expresses the hope that makes with continue to pioneer innovative, accessible storytelling across the medium. Location-based experiences (a new way to monetize), museums and personal headset technology are all ways to participate in VR. As far as SPHERES goes, McNitt is impassioned. “I want this in schools and libraries, and I want children to experience this because it’s a new perspective on science.” At 16, she was one of the only girls in her research class. Her peers made her believe she couldn’t pull off a science project. “I wasn’t as gifted in science as they were, but I worked really hard.” She was able to find a hidden passion for the subject and now believes VR is a way to make science more accessible to children today in a way it wasn’t to her.

McNitt is already at work on the second episode of SPHERES, with details still under wraps. When asked what she’ll do after the series, especially given you can’t get much more epic than the cosmos, McNitt finishes her last bite of sushi and adjusts her hat. “Space is expanding. There’s always something new.”