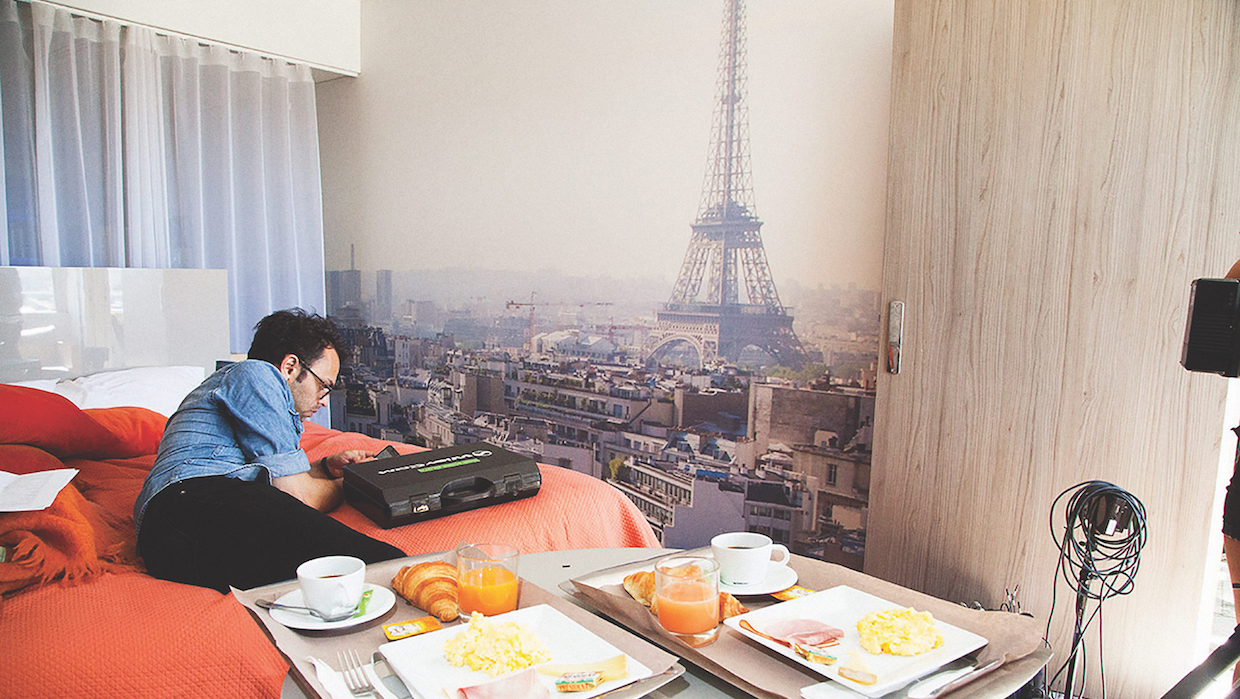 Nathan Silver on the set of Thirst Street

Foreign productions shooting in France have two options to obtain tax rebates. One is to officially become a French production, which requires a co-production treaty and going through the French Ministry of Culture’s CNC agency. For Nathan Silver’s Thirst Street, that wasn’t a practical option: the United States is one of the few countries to have no co-production treaty with France. (The United States has no coproduction treaties with any country, in fact, but that’s another story.) According to Thirst co-writer/producer C. Mason Wells, the production had to go the more common Tax Rebate for International Productions (TRIP) route.

The TRIP tax rebate covers up to 30% of salaries and wages paid to French/EU actors and production members plus general common expenses (transportation, accommodation, production company payments). Live action productions must shoot a minimum of five days in France and spend at least €250, 000 of qualifying expenditures there; for those with lower budgets, the minimum spend is 50% of the production budget. The numerous TRIP productions of late include the next Mission: Impossible and Murder on the Orient Express. For the considerably smaller and lower-budgeted Thirst Street — which follows an American flight attendant (Lindsay Burdge) who obsessively pursues a one-night stand (Damien Bonnard) in Paris — qualifying for the latter option meant a 15-day shoot in France, followed by two days in the US. To meet the 50% minimum, the first pass of the edit was done at a French facility, with the rest of the work done in the United States. Otherwise, “almost all of the money was allocated toward actual French production,” Wells notes. For financial reasons, the number of visas applied for was limited to Silver, the three American actors on-screen in the French segments and DP Sean Price Williams; the rest of the crew was French. Wells himself didn’t get a visa: “I was there almost off the record because it just made the entire process easier.”

Before he arrived, much of the production legwork had been done by Silver — who’d lived in Paris previously and arrived a few months before production started to scout locations — and the French production companies involved. One was In Vivo Films, where Silver’s friend Claire Charles-Gervais is one of two producers. Her on-the-ground, day-to-day experience — interfacing with municipal and state councils, obtaining shooting permits and other production infrastructure — made In Vivo “the key driver in terms of logistics,” Wells notes. “It’s damn near impossible to do what we did as quickly as we did for as little money as we did without the significant help of a production company that has likeminded artistic goals. If we were just dealing with it ourselves, it probably would’ve taken as long, if not longer, as an actual CNC co-production, just because we don’t have those relationships. Having someone on the ground, who essentially knows where to go for every single issue, was crucial to actually getting the movie made as quickly as we needed to make it.”

It helped that the vast majority of the plot takes place indoors and far away from well-known tourist attractions or areas that require higher fees to shoot in or around. (“I believe there’s one fleeting shot of the Eiffel Tower in the entire movie, and it disappears behind a building very quickly, seen out of a car window,” Wells says.) One of the main locations, the club where Bonnard’s character works, was easy to get because another producer, Ruben Amar of PaperMoon Films, knew its owners. The limited availability windows for star Burdge and DP Williams fortunately converged with an August shoot, when the club — as well as many other locations — was effectively empty, as much of Paris was away on annual vacation. “That dictated a lot of our shooting schedule,” Wells notes. “We wouldn’t have really been able to afford that location. They would have to be open for business any other time of the year because it’s an actual fully operating club. But they were completely closed, so we had the run of the place, whenever we wanted. In terms of rental houses or things like that, there has to be longer lead time in planning what equipment you need. But it’s even easier in terms of procuring apartments, not just for shooting but for us staying there. It was easier to get an Airbnb for a better price during that time because there’s no air conditioning in France, and no one wants to be around and it’s hot as hell, so they all go to the beach, which is pretty nice for them.”

With locations and scheduling set in advance, Wells describes his primary producing responsibility on the ground as “as an intermediary between [Silver] and the American side and the French side. It almost did feel like there were two separate groups of people making the movie: There were five Americans there, and then the rest was a French crew. Every time we told anyone in France what the budget of the movie was, which is a couple hundred thousand dollars, they were stunned at how inexpensive it was and how quickly we were doing it.” The most common point of comparison was Simon Killer, another independent film with an American in Paris. “We were hard pressed to come up with any other models, which is frustrating because distribution companies always want comps: OK, a movie similar to this did this well; we want to replicate its success. In our case, there wasn’t, really, any comp besides that film. And while that is also, by all accounts, a smaller, scrappier film, they were also shooting in the Louvre.”

The biggest production gap mentality was around shooting hours: “They have eight-hour shooting days there, with an hour for lunch. It’s a very civilized, normal way of going about things. We’re not used to that in terms of the productions that we’ve done [in the States]. People are often asked to work longer hours. Our French producers and French crew were very adamant about sticking to these restrictions. And we would sometimes run over.” One schedule overrun — necessitated by a rewrite and reshoot after two hours of shooting yielded a scene that didn’t work — “caused an enormous delay in the entire day of shooting and made a lot of people very angry at us who threatened to quit.”

“The entire production was this meeting in the middle between our very scrappy way of working and what they considered to be their scrappy way of working, which for us is a much higher, more advanced, polished level,” Wells continues. “It’s frequent compromise between those two methods: them knowing that we need to make the movie as good as we need it, to be a little more lax and run and gun, and us knowing that we are working in this foreign place, that they have certain rules that we have to respect and abide by, and knowing which ones you can bend and which ones you just have to let go at a certain point.”