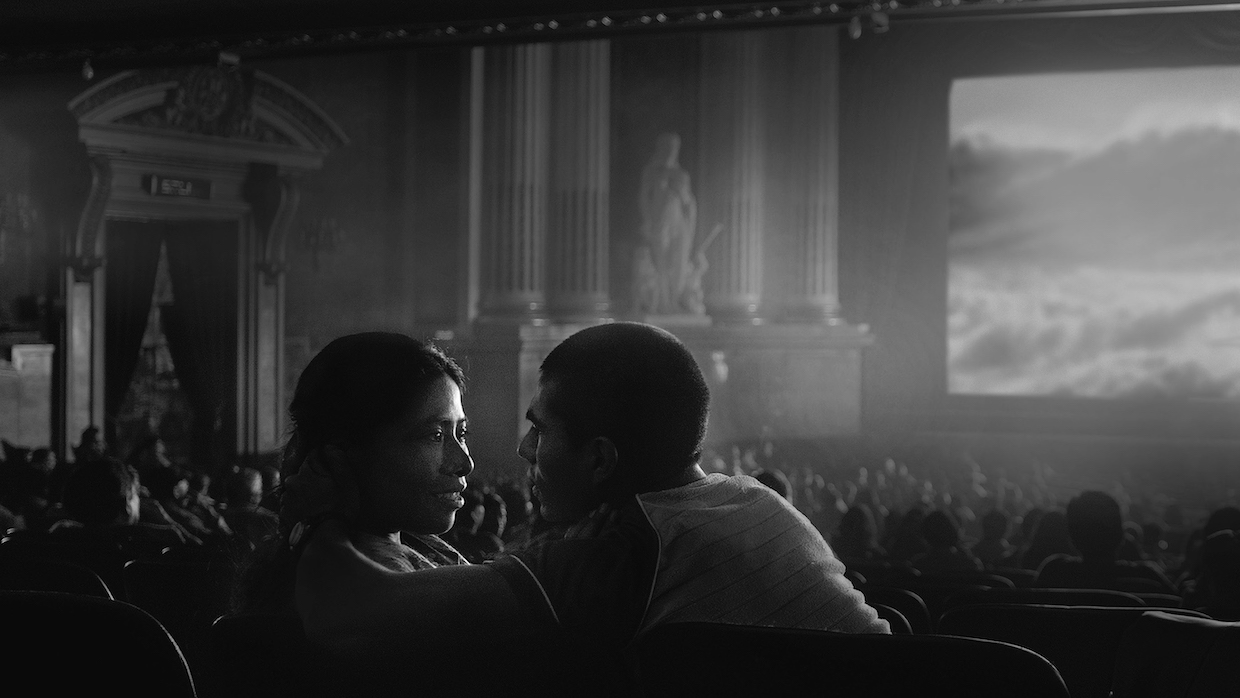 You should be able to watch a movie with the sound off — even before Mac Miller’s 2013 album, this was a phrase you’d hear from some producer or director extolling the necessity of purely visual storytelling. But if this dictum is true, then the inverse should be true as well: You should be able to listen to a movie with the screen turned off. Anyone wanting to try this experiment should start with the soundtrack of Alfonso Cuarón’s Roma, which is an astoundingly artful, immersive and intoxicating work. In addition to the crystalline dialogue tracks, Roma uses bespoke background field recordings, a diegetic score and the amazing spatial placement allowed by the Dolby Atmos system to create a sonic universe that pulses with the life of 1970s Mexico City just as readily as the visual action on screen does.

Responsible, with Cuarón, for the soundtrack is the film’s large sound team, which includes re-recording mixers Skip Lievsay (also sound designer) and Craig Henighan, and sound designer and supervising sound editor Sergio Diaz. Says Lievsay, whose previous collaborations with Cuarón include Y Tu Mamá También and Gravity (for which he won an Oscar), “On each of the three films I’ve worked on with Alfonso, there are these massive challenges, and they stem from Alfonso’s deep interest in the process and how to make technical advancements work for his vision.” For Roma, these advancements had to do with Dolby Atmos, a surround-sound format Cuarón and Lievsay previously used in a simpler way on Gravity. “[With Atmos] we could create an audio space where the audience no longer had to just stay at the front door,” says Lievsay. “They could actually step into the scene and experience the audio part of the picture within a new plateau of reality. We could make an environment where [sounds] were so accurately moving around the viewer that they could no longer question what’s happening with the audio — they could simply feel like they’re inside an audio event.”

Continues Henighan, “In Atmos, we’re able to use the x-axis and the y-axis as well as the z-axis. That’s the trick — using that [z-axis] in terms of extra reverbs or spatial ability. When Alfonso says, ’I want this to move discretely from a speaker on the left side all the way down to the front and then it’s going to come overhead and then down,’ [Dolby Atmos] is the only format you can approximate that discrete sort of ability.”

Roma’s sound design began with the dialogue tracks and Diaz’s field recordings. “Sergio and his team recorded as much as they could in Mexico City,” says Henighan, “and then we embellished them. Alfonso would say to [Sergio], ’We need to find the knife-sharpener guy.’ Or, ’We need to find real specific birds for the neighborhood, or real specific traffic for when they go to the cinema.’ So, Skip and I had these amazing textured tracks of Mexico that were awesome and unique — sounds that had real depth.”

The attention to detail extended as well to the “walla” or background dialogue. Says Henighan, “We didn’t use any canned walla at all — everything was written specifically for these characters.” That means every bit of chatter seeping in from the corners of the frame had its own individual dialogue written and recorded. “We had a couple of laser pointers on stage, and we would track certain characters [on screen].”

This sort of off-screen dialogue played a huge part in the film’s gripping hospital delivery room scene. In addition to the dialogue of the film’s protagonist, Cleo, and her doctors and nurses, Diaz recorded four sets of other women having babies, and their doctors and nurses. When Cuarón heard the original mix, says Lievsay, he thought it was amazing but not “panoramic enough.” So, says Lievsay, “We had to move everything around and create another person [having a baby] behind us, so we could have a true 360 of things happening all around Cleo and her situation.”

“The final stage of Roma’s 10-week mix involved “one extra step” — a mastering pass. “It’s where you’re no longer looking at it scene by scene but in much bigger chunks,” says Lievsay. It was at this stage that the re-recording mixers were able to most fully tap into Cuarón’s vast reserves of memory. “We’d get the details right,” says Lievsay,” and then “ask ourselves, how can we push this a little bit further? And that’s when Alfonso would tell us something about what actually happened, and we would find one more level of detail and complexity. All of us working together in the same room with all of our experience, plus the ability to move stuff [spatially in the mix] and create this sweet spot where the audience could really enjoy the movie — that was the ultimate goal of Alfonso’s, and that became our ultimate job, our charge. That’s what he wanted us to do.”