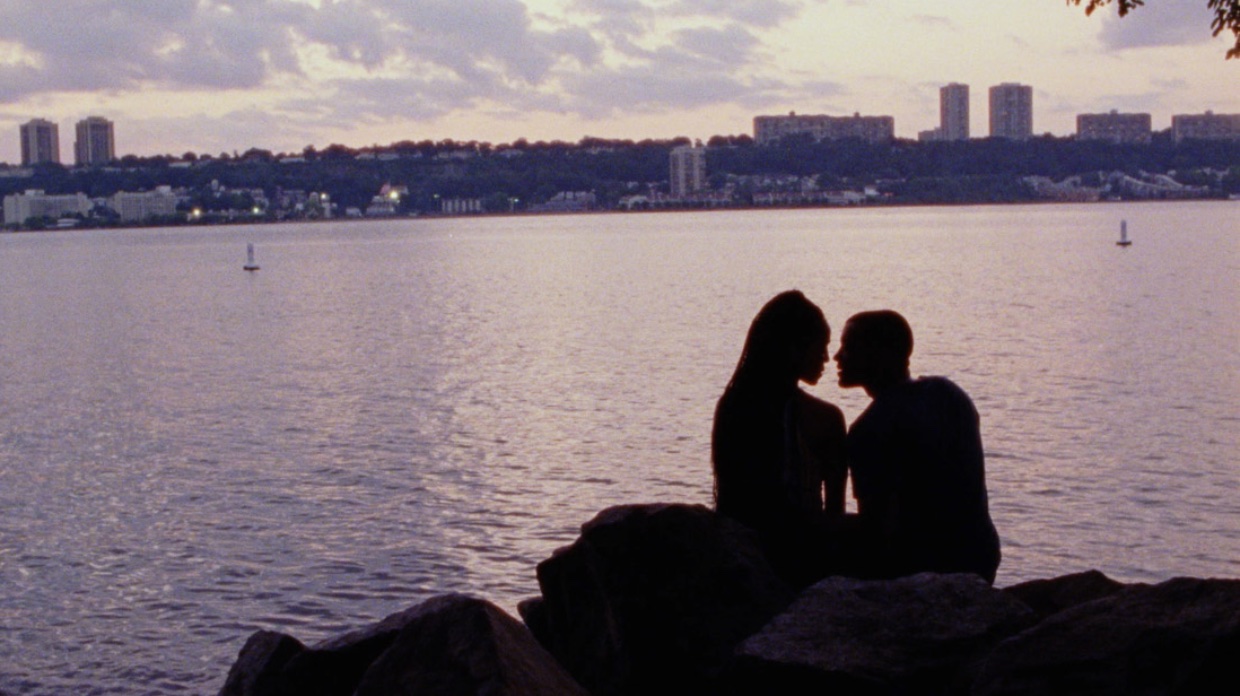 “Possessor of a sneaky sort of charm that hides his utter tenaciousness, Rashaad Ernesto Green, a promising directorial talent from the Bronx, makes movies that get under your skin with what, upon reflection, seems like relative ease.” That’s Brandon Harris from Filmmaker‘s 25 New Faces of 2010 writing about writer/director Green in the months before the premiere of his debut feature, Gun Hill Road. That Sundance 2011 pic — a tough and empathetic drama about an ex-con grappling with his son’s transition — more than attested to all the promise we spotted in Green’s early shorts, one of which, 2008’s Premature, is now, more than a decade later, the basis for Green’s sophomore picture, premiering today at Sundance. As Green discusses below, the years between the two pictures were spent doing episodic television but this Fall he itched to make another movie. Reuniting with his collaborator on the short, Zora Howard, Green expanded on the themes of that work to create a picture about young romance, hesitant adulthood, and New York City summers.

Premature premieres in the Sundance Film Festival’s NEXT section.

Filmmaker: When we last caught up with you, it was regarding your debut feature, Gun Hill Road. Since then, you’ve done a lot of television before returning to the feature world with Premature, which you shot and post-produced very quickly. Could you talk about all of this? How did Premature become your next movie, and why the long gap and then the quick production?

Green: Yes, I directed about five or six years worth of television before delving back into feature land. I had to put food on the table and keep a roof over my head. Then I had a major death in my family which slowed everything down for me. I wrote several scripts over the last few years but none that I felt ready to produce. Then I experienced a bit of an awakening of late. I was itching to make another feature. My voice had been stifled long enough. And I reached a boiling point. My friend Zora Howard and I decided to collaborate on the script together. My promise was for her to star in it, for me to direct it, and for us to premiere the film in the 2019 Sundance Next Competition, at the latest. We completed the script in May 2018 and began to look for financing. Knowing how that dance was probably going to turn out, I reserved the nuclear option of self-financing until the very last minute. When we reached the point of no return, I decided to make good on my word and put my money where my mouth was. We did receive additional funding once we were underway, but that first hurdle was a significant one with a lot of personal risk involved. I’m happy to say we survived, and I’m glad I did it.

Filmmaker: When you made the short Premature in 2008, did you ever intend for it to be a feature? How did you and Zora handle adapting and expanding it? What were the goals?

Green: After the success of my short film Premature, I had no intention of expanding it into a feature. As a matter of fact, I was pretty against the idea. I felt I had already told that story, told it well, and there would be no need to tell embellish it with a whole bunch of exposition and make it less impactful. Zora (who starred in the short at age 14) and I had been talking about working together again for years. She had a winter break before her final semester at UCSD Grad Acting. We didn’t know what we would write about until we sat down together. We threw out a bunch of ideas, but we paid close attention to what we both felt was missing in black cinema. We felt there was an overabundance of black films with narratives driven by playing the race card with themes of black victimization, black fear, black pain and black death. Although we understood the impulse to explore these narratives, we wanted to do something different with this film. We decided instead to explore black life and black love. In the current cinematic climate, we viewed simply telling a young black love story as a radical act. It wasn’t until writing it that themes from the short film began to influence us and find their way into the story. It then morphed into something more complex and beautiful. This time, the young woman was a little older, a little wiser, but still not fully knowing. Ayanna isn’t necessarily aware that’s she’s on a journey towards self-discovery and self-actualization. She’s thrust into a situation that forces her to grow, whether she’s aware of it or not. The ups and downs of love in a young person’s life can bring the greatest joy as well as the greatest pain. Ayanna may not be ready for this lesson when we begin the film, but she grows into herself as we progress. And such is life. In many instances, we’re not ready for the journey we find ourselves on, but we often persevere and grow as a result.

Filmmaker: Talk about your collaboration with Zora, who co-wrote this with you, stars and is an associate producer. She wrote the poetry for your previous feature, and there’s poetry in this film as well. How does your collaboration work, and was this any sort of biographical story of hers?

Green: It was wonderful to work with Zora, to have someone I trust to bounce ideas off of, argue and find compromise. Zora and I have been friends since she was 11 years old. We’ve lived around the corner from each other for 15 years. I first saw her perform poetry when she was 12 and was blown away. She was appointed as New York’s first Youth Poet Laureate in 2010. It’s safe to say that poetry is Zora’s domain. She was a little shy about us making Ayanna a poet, and even after deciding that Ayanna was a writer, we didn’t write a single line of poetry into the script. After we shot the film, however, and got into the cutting room, it was clear we needed a way into Ayanna’s mind, to experience more of what she’s feeling and thinking on her journey. All we did was tell Zora where we were thinking of placing poetry and what it might loosely allude to. Zora did the rest. She recorded magnificent verses of poetry into her iPhone and we placed her poetic voiceover accordingly. As far as the script is concerned, although Zora didn’t experience everything Ayanna experiences in Premature, she certainly brought many of her life experiences into the character. We each culled from our life experiences to imbue each character on screen with as much as much of ourselves as possible. All of the voices and characters in the film we either know personally, have encountered, or they’ve lived within us at various times in our lives.

Filmmaker: You shot in September and are premiering in January — an old-school “rush to Park City” schedule, which is harder to do these days as Sundance grants fewer extensions and there are so many competing submissions. What was your secret to making this schedule? How did you plan the film to accomplish it?

Green: Everything about this film was old-school, including the film it was shot on. Because we knew we’d be sprinting in the editing room and the fact that we were shooting on film, my wonderful DP Laura Valladao and I decided to employ a very conservative shooting strategy. We couldn’t just hose it down like we would in normal circumstances when shooting digitally. We had to be very selective when choosing shots and exercised a lot of patience in the camerawork. Because I’m used to editing for four days on most television episodes, I had faith that my editor Justin Chan and I could get a cut ready for submission in two weeks. It was really tight, but we got it done. Justin is one of the fastest guns in the west and he’s very opinionated. We didn’t have a ton of material to choose from. We were forced to make decisions really quickly and trust our instincts, perhaps more than usual. We didn’t have time to think, belabor and coddle the cut. We threw scenes out that slowed down the pace of the storytelling, and scenes that were unnecessary. We weren’t too precious about it. The performances were there, so we didn’t have to worry too much about that. We simply had to make the narrative make sense and deliver the impact it was intended to deliver.

Filmmaker: Finally, your film is one of a long line of New York City “youth in the summer” movies. What aspects of New York in 2019 were important for you to capture here, and then what universal chords were you also trying to hit?

Green: Our story is set against a currently vanishing Harlem landscape. In ten years, Harlem will not look like what it looks like today, just as it isn’t what it was five years ago. There’s a new bar, coffee shop and boutique popping up on every corner in Harlem. All the old mom and pop shops are disappearing, as well as the black population. We felt it was pertinent to capture a universal story of love among black youth, and to immortalize that love in present day Harlem on celluloid before it was too late. And although it captures this moment in time before it all changes, the 16mm film gives it an automatic sense of nostalgia, as if it could have been taken any time within the last 20 years. I really dig that about 16mm. Furthermore, given the long history of black cinema and this specific cultural moment, we felt compelled to have a young black woman drive this particular narrative. Across all forms of media, we so rarely get to experience a strong black woman’s point of view, especially within a simple story of love. Most people know what it is to be in love, and it’s much easier to identify with someone who is different from you when they’ve experienced the same things you’ve experienced. So yes, we chose a love story because it’s universal. But also because for black and brown people, we simply don’t get enough of them.