“Picture Wrapped in Early November and We Had a Cut by Mid-December”: Editors Marina Katz and Brian Goetz on The Brink 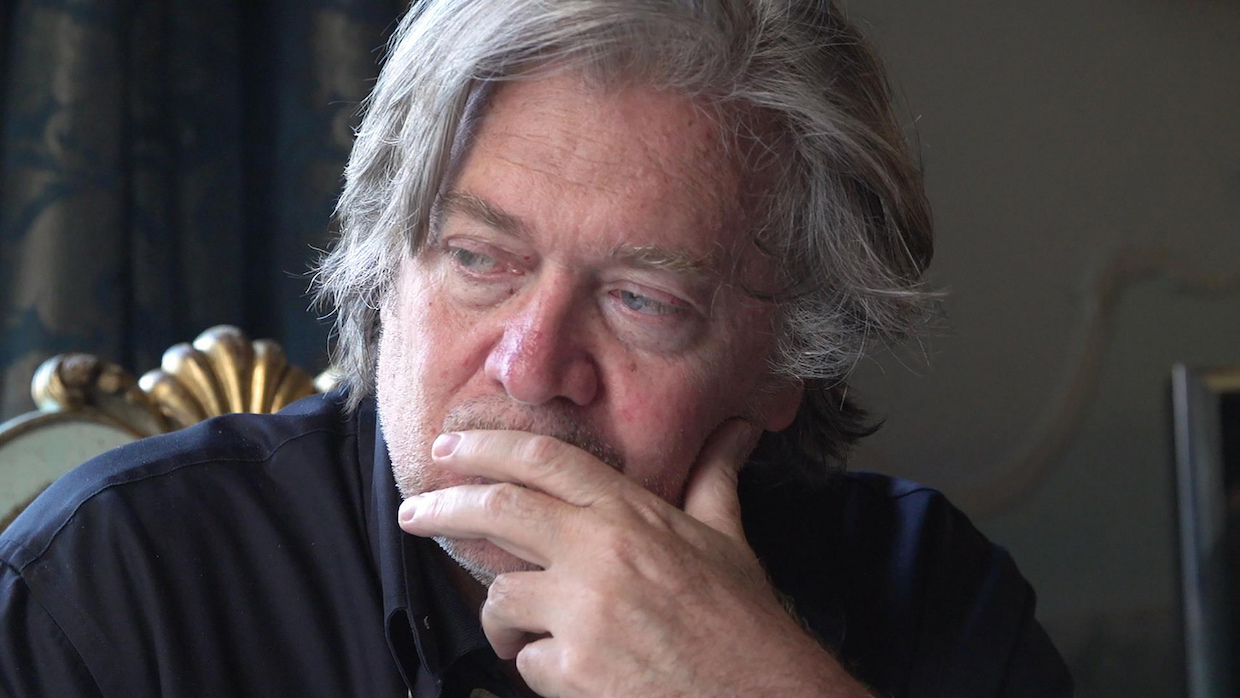 Steve Bannon in The Brink (courtesy of Sundance Institute)

by Filmmaker Staff
in Editors, Interviews, Sundance
on Feb 1, 2019

Tracking “economic nationalist” and Deplorables-rouser Stephen Bannon from summer 2017 to fall of last year, The Brink follows Bannon as he tries to rebrand himself, post-White House, as a unifier of the European alt-right, culminating in the defeat of his preferred candidates on Election Night 2018. Director Alison Klayman shot the film and edited alongside Marina Katz and Brian Goetz. Via email, the latter two editors spoke about the challenges of assembling the documentary on a tight turnaround.

Goetz: I worked with the director Alison Klayman on a project (ESPN’s Enhanced, produced by Jigsaw) and loved working together. There was a fun dynamic that we both brought, a lot of creative exploring in the edit, and I was really happy with the final product. I loved the juxtaposition of light-hearted + super-dark moments. This new film would fit the bill!

Katz: I met Alison at Sundance in 2018. I was a big admirer of Alison’s work, especially Ai Weiwei: Never Sorry, and Alison loved my edit of MATANGI/MAYA/M.I.A. We met up back in New York and really connected over film and our worldview. Because of that connection, although we hadn’t worked together before, Alison was able to trust me with the delicate subject matter of this film.

Goetz: Our biggest goal was keeping the tension in the story so that it kept driving onwards. We had many scenes we loved for a range of reasons (dramatic effect, comedic relief, current day parallels) that we had to cut to keep the story moving, so a goal became to find places for those to go back in. Our approach was always “less is more.” Sometimes the texture we loved was just too much, so we’d watch it without, and chances are it was better that way.

Katz: We wanted to keep the film as verite as possible. Alison had exceptionally close access to our protagonist, Steve Bannon, and we wanted the audience to feel as if they were observing him firsthand. Steve is in the news a lot and is very good at manipulating his sitdown interviews. The verite footage gave us an opportunity to expose him in a more complex and illuminating way.

Goetz: Picture wrapped in early November and we had a cut by mid-December, so a lot of bold moves were made. The joy of that is while some moves are glaringly wrong, many choices worked and we didn’t have to play with the shape of the film too much.

Katz: We created a rule with the archival: it could only be informational, not used as a surrogate for the voice of the filmmaker. This helped keep it pointed and smart. For dramatic effect, we covered radio voices with verite of our protagonist, adding a layer of him reacting to the news media about him. We passed sequences back and forth, and to our director too, always keeping the edit moving. This helped us put together the film quickly—which was necessary, given our short tight frame!

Goetz: I was a PA on films and told everyone I met that I was an editor.  They’d ask how much experience I had, to which I’d say “zero!” After some time, a film came along (It’s Happiness, a polka documentary) and said “speaking of zero, that’s the exact amount of money we have for editing.” After that film, Sam Adams beer wanted a cheap documentary editor for a new campaign. That campaign took off and somewhere in that time I realized I was professional!

Katz: I took a class at The Edit Center in New York. After that I was able to get a mix of assisting and short edit jobs before landing my first feature, a documentary about the rapper and artist M.I.A. The job was a long shot given my limited experience, but I was passionate and hardworking and was able to prove myself. Then the film premiered at Sundance last year and a lot more opportunities opened up!

Goetz and Katz: We used Premiere. It made more sense given our tight edit schedule and because our director, who was also a co-editor, was more comfortable with Premiere than Avid.

Goetz and Katz: The opening and first act were in some ways the most difficult because the film has to sell itself, asking the audience to want to spend 90 minutes with our controversial protagonist, Steve Bannon.

Goetz and Katz: Our beautiful graphics were done by Rob Slychuk. Before adding graphics we tried hard in the edit to make the sequences work and make sense. This allowed Rob’s graphics to really hit the idea out of the park without having the burden of loading too much information on our audience.

Goetz: We hope that the film has a bigger meaning than just an enhanced look at Bannon. Seeing him travel over the globe and the people he interacted with took on new meanings when you cut it tightly all together and you see the impact he has.

Katz: It was wild and illuminating to watch hundreds of hours of the “the other side” operate. Bannon and his crew are not the geniuses some purport them to be, but they are very effective and more complex than I expected. I learned so much from watching this material, and hope that people who see the film feel the same.