“The Biggest Goal is to Keep the Story Visually Interesting”: DP Tarin Anderson on Corporate Animals 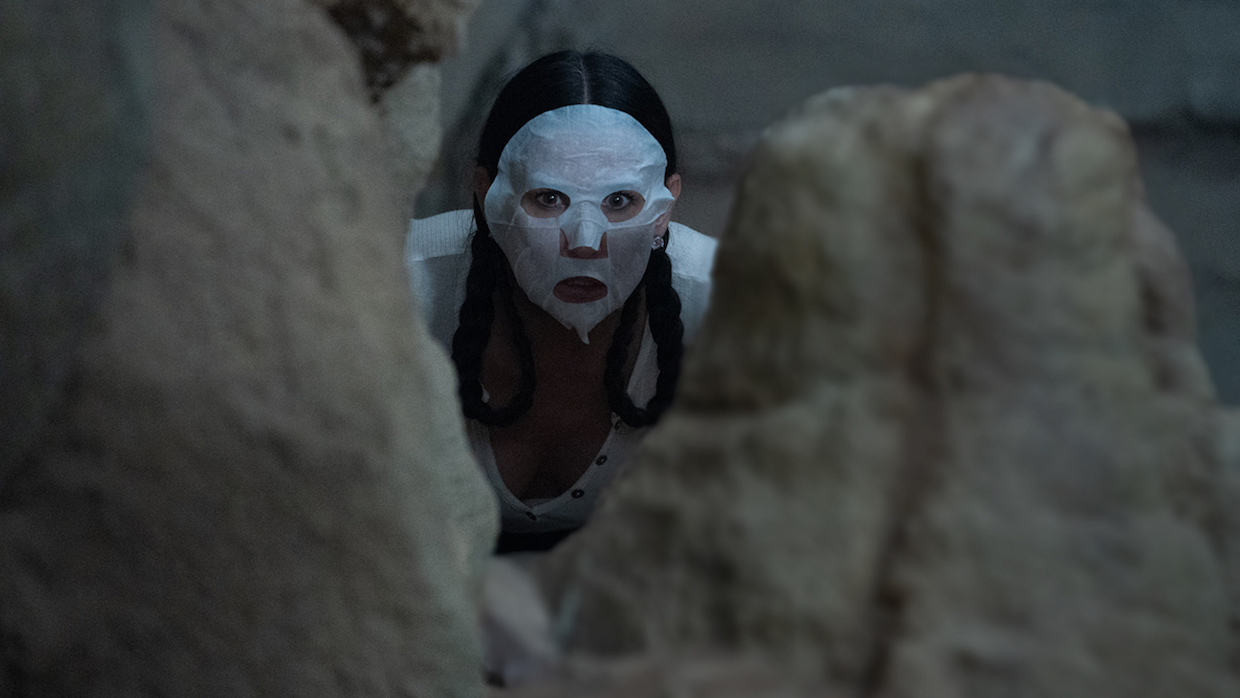 by Filmmaker Staff
in Cinematographers, Interviews, Sundance
on Feb 5, 2019

Corporate Animals gives Demi Moore a rare chance to show her comic skills. As Lucy, the awful CEO of a new company, Incredible Edibles, Moore orders her employees on a team-building exercise/retreat via a New Mexico cave. When the workers are trapped, it’s only a matter of time before they becomes the Incredible Edibles. Via email, DP Tarin Anderson addressed the challenges of making a film tracking eight characters in a closed setting.

Anderson: I’d worked with some of this film’s producers on pickups and reshoots on their previous movies. They recommended me to the director, Patrick Brice. He and I had a great first meeting and I got the call from there.

Anderson: When you have eight people stuck in a cave, the biggest goal is to keep the story visually interesting. It was important to me to find places we could play with color temperature and the level of darkness to help show the passage of time and change. The film is also mostly handheld and we thought carefully about when to add in dolly and Steadicam to enhance or heighten the moment.

Anderson: We watched pretty much every cave movie and “contained space” movie ever shot. My favorite cave movie was Sanctum. And as far as contained space, 12 Angry Men is as good as they get.

Anderson: Time is always the biggest challenge. Most of our scenes had eight actors in them, which added up to a lot of coverage. I hate using the word “coverage,” but it was important to get all the beats we needed and have moments with all the cast experiencing what is happening around them.

Anderson: We shot on the Alexa Minis and used two cameras for the majority of the shoot. We were shooting mostly in a cave, which was a stage build, but even with that I knew we would find times to strip the camera down and tuck it into a tunnel or need to get as far back as possible in a tight space. We were also shooting mostly handheld with some Steadicam, so the Mini was an easy choice for all of those considerations. As far as lenses, we tested several different prime sets but we really fell in love with the Ultra Primes. We tested each lens set with the headlamps we were using and thought the halation from the Ultra Primes was the most natural.

Anderson: Our main set was a 60′ by 30′ cave set build. We were able to hang soft boxes overhead with Skypanels so that we could adjust color and intensity while rolling. Each side of the soft box had separate teasers so that we could control the light hitting the sides of the cave as needed. The soft boxes gave us a nice ambient base layer, and then we danced floor units around to model faces, which was usually a skypanel with a chimera and then an army of flags to contain light to the actors’ faces and take it off the cave wall.

Anderson: We finished at Light Iron with colorist Nick Hasson. We had set our basic color temperature looks and exposure on set but in post were able to really push everything a little farther. On set I tried to shoot a “fat negative,” as we used to say in film, to retain information knowing that we would be able to go darker in post and slow rocks down around a person that would have taken a long time on set.