“We’re Looking for Passionate People Who We Think Will Put in the Work and Deliver”: Dorota Lech on the 20-year-old Hot Docs Forum 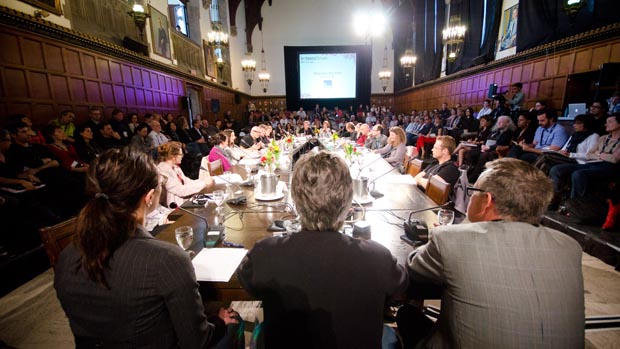 by Lauren Wissot
in Festivals & Events, Filmmaking, Financing
on May 6, 2019

As a film journo who usually prefers celebrating the fruits of cinematic labor over covering the messy business of making the product I’m often a bit squeamish when it comes to observing pitch sessions (in no small part due to the glaring abundance of older white faces dangling the purse strings). Fortunately, the folks behind the two-decade-old Hot Docs Forum, which utilizes the appropriately Harry Potter-esque, neo-Gothic Hart House student center at the University of Toronto, do an expert job of combining industry necessity with collegial fun.

This is perhaps best evidenced by the Forum’s Cuban Hat Award, a prize decided by audience ballot and funded by literally passing around a Cuban hat as collection plate during the proceedings. And this year’s eclectic take, which went to Bo McGuire and producer Tatiana Bears for their intriguingly titled Socks on Fire: Uncle John and the Copper Headed Water Rattlers, included over $2,000 in six currencies along with various production services. And that’s in addition to a homestay in Copenhagen to office space in Greece to two Toronto Raptors “We The North” t-shirts — they’d made the NBA playoffs after all — and a tin of ginger mints. (No ginger mints went to the projects Midwives, Colour of the Wind or Twice Colonized, though they did ultimately receive Canadian dollar prize winnings totaling $30,000, $20,000 and $30,000, respectively.)

So to get a better understanding of how this transformation of high-stakes shark tank into supportive team spirit came about, Filmmaker turned to the nomadic (Poland-born but Toronto and LA-based) head of the Forum, Dorota Lech, who also leads the Toronto International Film Festival’s Discovery section.

Filmmaker: Since nearly all the top-tier doc fests have a Forum component these days I’m curious to hear your thoughts on the similarities and differences between Hot Docs and, say, IDFA or CPH:DOX (to name just two international festivals with strong financing arms).

Lech: Pitching forums are co-financing and co-production events that were born in a time three decades ago, when creators and decision makers were less connected. Over time licenses were becoming smaller and increasingly rare, so the idea was that it would be easier to finance your documentary with the help of a handful of cooperating partners.

IDFA and Hot Docs are the biggest and most established. We just celebrated our 20th anniversary, and our sister event, which we originally licensed the concept from, is 30 years old. The Hot Docs and IDFA forums are very similar in size and format — 21 projects have seven minutes to pitch inside a room of 350-plus decision makers, and they receive eight minutes of live feedback from a table of commissioning editors and major international film funds.

Forums have always been about creating community in our industry, about learning and sharing from the projects that are presented. Additionally, they are a launching point — not only for the project but for the careers of the companies and artists that are presenting. I’d say the major difference is that IDFA has more European buyers, while Hot Docs has more North American and international partners. We also have several private groups that attend and are looking to privately invest, including Impact Partners and the Chicago Media Project. Then there’s Hot Docs’s first look, our own initiative of philanthropic supporters giving no-strings-attached cash, anywhere between $50-100,000 in prizes. Additionally, we have another award of $20,000 given by a single generous donor, as well as a $10,000 prize for the best Canadian pitch, as selected by a secret jury.

I’ve attended other forums around the world, which tend to be more focused on the projects from that country or region and have less decision makers. These spaces are great ways to garner local support and to hone pitching skills. (From North America, I’ve heard great things about Points North.)

Filmmaker: You hold master’s degrees in political science and gender studies, which makes me wonder how that background might influence your decision-making process when it comes to the Forum itself — in who gets selected to pitch and perhaps even which gatekeepers are invited to participate.

Lech: I think since I come from a film programming background I tend to view the Hot Docs Forum as a holistic program that should have balance in terms of representation, and that works as a slate that has something for everyone (and not only for the limited number of people around the central table). I’m looking to showcase a wide scope of international topics, and at the same time, the points of view of the teams making those films. (One of the European broadcasters attending this year said that he was expecting to buy North American projects and is returning home with projects from five countries he hadn’t expected stories from!) We truly value finding tales told from within communities, which you could see this year in projects like 1001 Nights Apart, Alvin Ailey, Another Brick on the Wall, Hidden Letters, Monguen (Life), Midwives, Socks on Fire: Uncle John and the Copper Headed Water Rattlers, Twice Colonized, and Zinder.

I’m also interested in documentaries that have exceptional storytelling and cinematic styles that expand visual education. An ideal program showcases a range of films, some that will first play festivals and cinemas before reaching TV broadcast or streaming services, and others that have more narrow paths but are exceptional in terms of storytelling or access or scope. If a project has both elements, I fall in love instantly.

In terms of the actual selection, we have three outside voices join the winnowing process each year. This time the team included Poh Si Teng (Al Jazeera English), Leslie Vuchot (The Festival Agency), and Emma Ho (Anchor Worldwide).

Filmmaker: You mentioned that you’re also a festival programmer, currently heading TIFF’s Discovery section, so have there been any finds you’ve made at the Forum that you’ve gone on to curate? (Or vice-versa, selecting projects for the Forum from filmmakers whose work you’ve programmed in the past.)

Lech: I’ve only been producing the Forum for five years, since 2015, and until this year was also working on the TIFF documentary program alongside Thom Powers. In that time, the only projects that have gone on to play TIFF have been Madeleine Sackler’s Dangerous Acts Starring the Unstable Elements of Belarus, Sarah McCarthy’s Dark Matter of Love, John Maloof’s Finding Vivian Maier, Anjali Nayar and Hawa Essuman’s Silas, as well as Frederick Wiseman’s In Jackson Heights.

That said, many have played Hot Docs, where I’m not involved with the programming, including just this year One Child Nation, The Hottest August, XY Chelsea, Cold Case Hammarskjöld and The Infiltrators.

At TIFF, I’m the lead programmer of Discovery, a primarily fiction program showcasing the first and second features of international directors. It’s world (and in some cases international) premieres only, a space to highlight new talent, new voices, and new cinema that regardless of form emboldens, or even challenges, notions of cinema and storytelling beyond what is established. There we have a long history of championing daring directors from around the globe (such as Chantal Akerman, Yorgos Lanthimos, Lav Diaz, Julie Dash, Michael Haneke, Jafar Panahi, Ildiko Enyedi, Pablo Larrain, Steve McQueen, Christopher Nolan, Barry Jenkins, and the list goes on), and believe in holding a space for future visionaries to launch their international careers.

Filmmaker: One of my biggest pet peeves as a critic is a documentarian stressing, narcissistically, how important the subject of their film is. “Important to you,” I always think. It won’t be important to me unless I’m convinced through the artistry. So are there any specific, disqualifying mistakes you see from filmmakers applying to the Forum?

Lech: I’m with you in that the artistry is key. Any protagonist or topic can be interesting, but exceptional filmmaking and storytelling is rare — and those are exactly the projects we’re looking for.

In terms of identifying mistakes, it’s the standard issue of people not reading our guidelines closely, or rushing through the application process. I read the answer to every question from all 350-400-plus applicants. Having done that for quite a long time, I can tell when someone is phoning it in or hasn’t thought through all the questions.

Because Hot Docs has so many programs to help develop and hone the skills of filmmakers, we’re really looking for passionate people who we think will put in the work and deliver. There’s a lot of time and labor that goes into preparing a project to pitch — not to mention the pitch itself and the tremendous amount of followup afterwards — once it’s selected for the Forum. We want to make sure that the people we select are up to the task.

Filmmaker: So are there ever projects you’re personally enthusiastic about that fall flat at the Forum? And if so, do you try to connect the filmmakers with other funding possibilities?

Lech: It has certainly happened in the past, but to be completely honest, no. This was an overwhelmingly successful year, and we’ve already had several reports from teams about deals they made after pitching, which is huge because it’s been awhile since things seemed to move this quickly! Even a team that personally felt they hadn’t done well in the pitch told us that they closed their budget on the second day of Deal Maker meetings. (Deal Maker is the program of curated, one-on-one meetings run by Madeleine Russo that exists alongside the Forum and matches the 20 projects, as well as an additional 35, that didn’t pitch publicly with decision makers.)

As always, it’s harder for projects that pitch in the development stage to secure partners because they’re less advanced, but that certainly isn’t a reason to exclude films at early stages. This year we had Trafficking Jam, Mission Sex-Ed, and Monguen (Life), and I have a lot of faith in those teams. The presentation at the Forum can really give them a leg up in their next stages of financing and production.

Ultimately, though, a single presentation does not make or break a project — it’s a fleeting but highlighted moment in the development and production of a film. Over the 20 years we’ve been around some pitch presentations have tanked. But the films often went on to be made and find various points of success, whether at festivals, in cinemas, on television, or on the streaming platforms.