“If You Really Want To Make Something You Get Creative”: Experimental Documentarians Talk About Thinking Outside The Box At IFP Week 2019 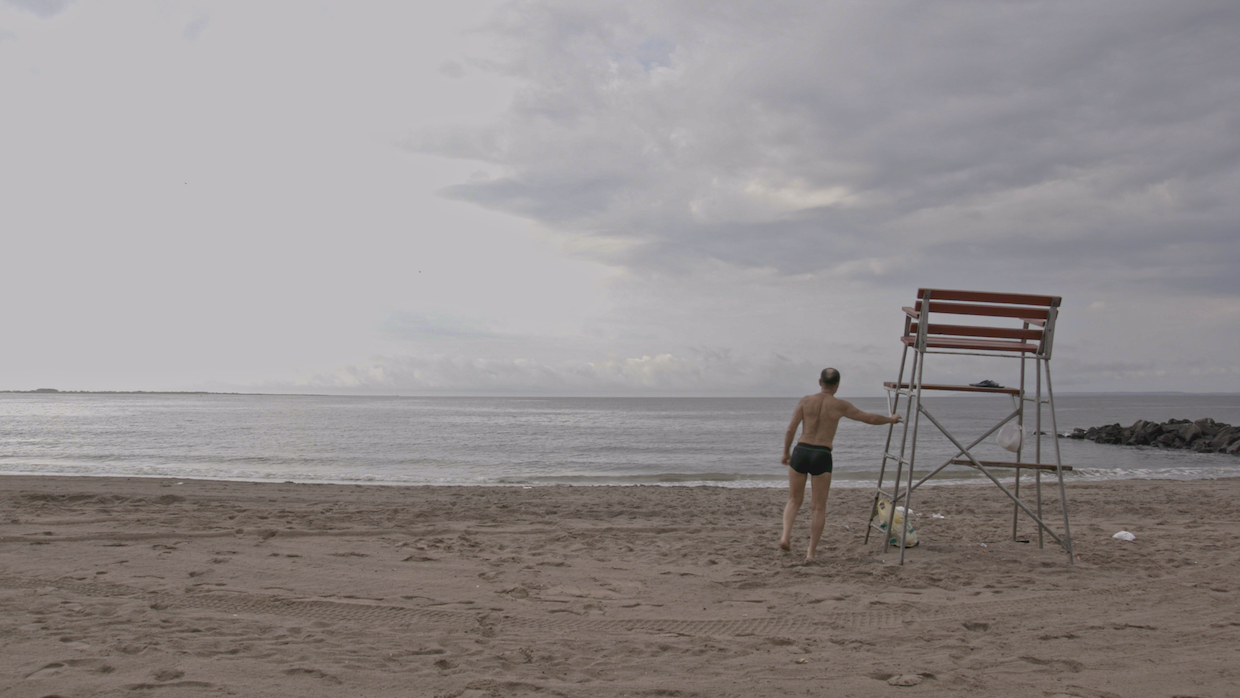 Documentaries don’t have to play by the rules of fiction films. Take a non-fiction hit like Won’t You Be My Neighbor?: It doesn’t merely tell a linear story so much as jump around subjects, with Fred Rogers’ life as a basic foundation. (Compare/contrast with the forthcoming Tom Hanks-starrer A Beautiful Day in the Neighborhood, which zeroes in on one slice of his career.) But some documentaries go way out there. The IFP 2019 panel “Out of Bounds” rounded up four creatives — two filmmakers, one editor, and a producer tasked with helping people like them find funding and distribution — who push the boundaries of what constitutes a documentary, or even what constitutes a movie.

Take Cameraperson. For her directorial feature debut, longtime documentary cinematographer Kirsten Johnson took loose ends from the films she’s shot —–unused footage and shards from her own unrealized projects, snipped from the likes of Citizenfour, Happy Valley and Fahrenheit 9/11 — and cobbled them together. There’s little or often no context for the images, and they seem to be arranged as if on shuffle. What does it all mean? What is an audience supposed to make of it? And yet it was a modest hit, with rave reviews (a single, lone pan on Rotten Tomatoes!). After its theatrical release it was inducted into the Criterion Collection.

“It was terrifying before it came out into the world, because it didn’t look like anything we expected the film to look like. We weren’t sure anyone would get it,” Johnson said, of her film’s strange (and long — technically it was in the works for some 25 years) journey. “And then we had this glorious experience of people getting it, and saying, ‘This doesn’t look like anything I’ve ever seen before. That was a wildly empowering experience for me.”

The lesson: Be bold. But being bold can be a terrifying prospect. Not only can you doubt, as Johnson did, that audiences will understand, let alone embrace, your adventurous opus, but you have to struggle to convince dubious gatekeepers — from moneypeople to distributors — of the project’s validity.

That starts with remembering to have perspective. Jonathan Bogarín — who directed the experimental doc 306 Hollywood with his sister Elan — pointed out that all documentaries are technically risky experiments.

“Any kind of non-fiction project is open-ended to some degree,” Bogarín said. “You’re dealing with real people and you’re developing and exploring and dealing with things as you go. What makes something seem out of bounds is if you make decisions that tell the story in non-traditional ways.”

306 Hollywood shows the two Bogarín siblings excavating their late grandmother’s house, going through decades of belongings. Rather than a direct cine-memoir of their experiences, they use bold flourishes, relying on magical realism and playful touches: bringing photographs to life, illustrating their grandmother’s recorded musings, or recreating certain memories. Arriving at the shape took some doing.

“One of the criteria we gave ourselves before we fully understood the story is that everything in the film is a metaphor,” Bogarín said. “For every single lived experience, every emotion, for crying, for laughing — every single idea had to have a visual metaphor we could put onscreen. Everything had to be a moving, living, breathing metaphor.” That gave them not only some structure but a creative, original one. They even used unusual sources of inspiration, such as natural history and archeological museums. “Those are ways that human beings have organized the past. They have taken old things and displayed them. We were going through our grandmothers’ stuff, someone who’s an ordinary, not a famous person, and asked how do we show it like it’s archeology. Because archeology is the study of human history through stuff. That sparked ideas on how to tell the story.”

Hannah Buck is a multi-hyphenate, who’s worked as an art director and has done graphics and animation. But her main gig is in editorial. She’s drawn to filmmakers who don’t do narrative; she has credits on Terence Nance’s An Oversimplification of Her Beauty and his HBO show Random Acts of Flyness. If she’s sent something that could be handled traditionally, she runs the other way.

“If I’m getting a lot of interview-heavy material, I’m thinking about how I can construct it without relying too much on dialogue,” Buck said. If she gets something without any clear story, she has to find a structure. She tries to put that part off till late in the edit, tending to the material itself first. Sometimes a sense of structure gets imposed upon you.

Such was the case with Rodney Evans’ Vision Portraits. That film began as an episodic look at three visually impaired artists, each regulated to their own section. Later in the process, Evans decided to out himself as visually impaired as well; over 20 years ago he was diagnosed with the rare disease retinitis pigmentosa, and currently has a visual field of 20%. Suddenly he was a character as well.

“We had to think about what does that mean in terms of an arc,” Buck said. But that’s a rare case of a sense of order coming out of leftfield. “Generally I think the solution to questions you don’t have the answer to early on is to spend a lot of time with the material and find what the strengths are. Listening to the material is important.

Danielle Varga was the panel’s producer; in fact, she worked with Johnson on Cameraperson. She knows the struggles of getting outside-the-box docs made. “It’s incredibly challenging,” she said. “It’s a challenge to pitch, to fundraise, to get supporters who are maybe intrigued by your risks. But people want predictable things. People want to know there’s a model, a model — true crime, whatever it is — that’s satisfactory.” Part of the trick is not giving up. “You have to find people who are as excited by being challenged as you are.”

You also have to be creative, to do the most with what you can get, even if that’s not much. For Brett Story’s The Hottest August — filmed in New York during the eponymous, definitely quite hot month back in 2017 — the budget was comprised entirely of fundraising and a minimal grant. “We thought, ‘Alright, we’re going to have a bare-bones crew, we’re going to use Brett’s crappy Toyota truck,’” Varga recalled. But that inspired the process in ways more good than not. “If you really want to make something you get creative. It helped that it was not a verité shoot, that we had a contained month, we had our D.P. on call. You think, ‘How do I make this happen?’ For me that’s both very fun and the biggest nightmare of the job at the same time.”

Varga certainly helped Johnson make Cameraperson, in more ways than simply helping it get funded. That brings up another point: “We need collaborators. You need a person who can see what you can’t see,” Johnson said. “You’re making the film for a reason that is a mystery to yourself.”

Johnson’s follow-up to Cameraperson isn’t another documentary; it’s a fiction film. But even there Johnson doesn’t want to stick to tradition. No one who’s lensed so many documentaries could ever just stick with a shot list.

“I just want to get out of this space,” Johnson said, actually getting out of her chair and walking amongst the audience to make her point literal. “That space,” she said, pointing to her panelist chair, “is from a place of knowing. And this space,” she added, pointing to the entire theater, “is to discover. Some things I can’t see from there.” Her ability to work on the fly, to train her camera on the unplanned, drove her producer crazy. She wanted plans; Johnson wanted freedom. Eventually Johnson agreed to a compromise: “I had to be constrained in certain ways in relation to the producer, so she could do her work, and I’m deeply respectful of her. She was saying, ‘Eight weeks ahead, you have to decide this today. If you don’t everything else is screwed.’ I’d be like, ‘Okay, I’d do it today.’ And I did. I made all those deadlines while leaving space to not know certain things.”

There’s no way Johnson will ever be entirely fenced in. “What Cameraperson did for me was it broke me into new territory,” Johnson said. She’s fascinated with how her follow-up will look, which she hopes will not look like anything made before, just like its predecessor. “I’m scared, but I keep going towards that. It’s messy and I’m terrified of it. But that feels right. That’s what I’m hoping for: I’m going to really deeply surprise myself, again.”

Besides, perhaps the lesson of Cameraperson’s success is moviegoers are actually open-minded. “Trust your audience — that’s the shocker,” Johnson said. “Your audience is actually way smarter than you’re giving them credit for.”