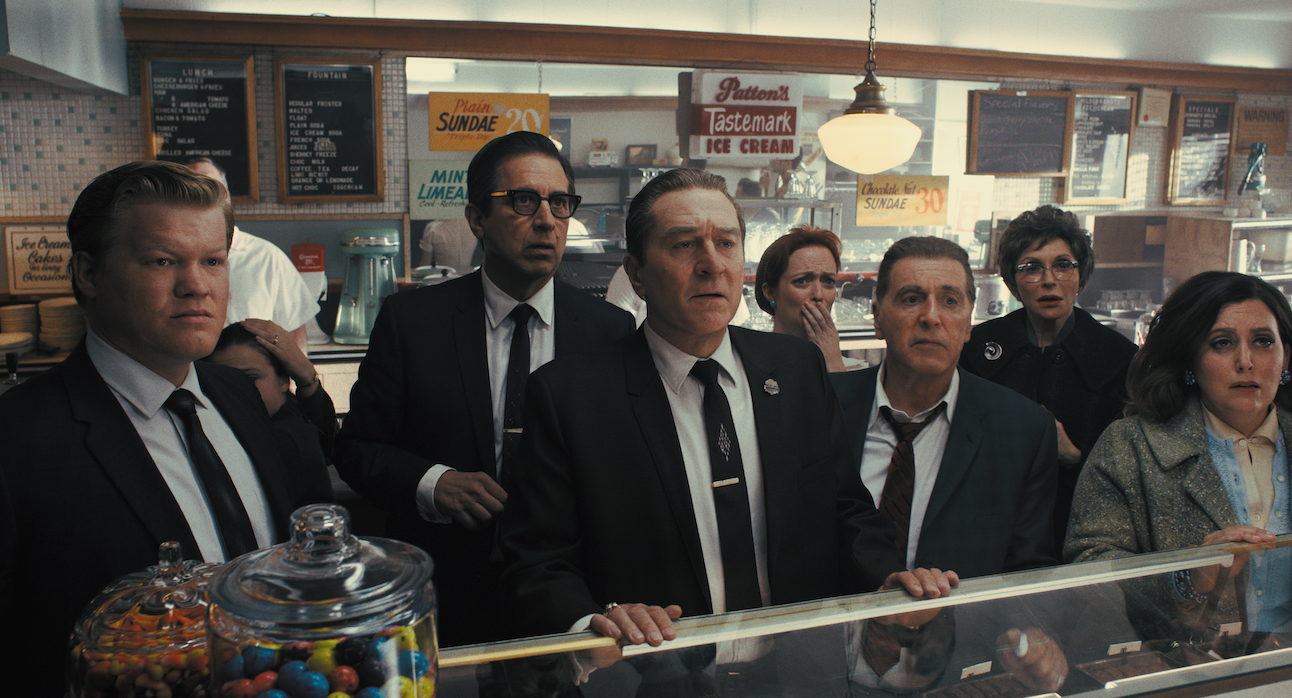 by Aaron Hunt
in Cinematographers, Interviews, Issues
on Dec 10, 2019

Martin Scorsese’s The Irishman, based on hitman Frank Sheeran’s (Robert De Niro) account of the murder of Teamster luminary Jimmy Hoffa (Al Pacino), talks back to its characters’ memories as much as it does the director’s past films. It’s Sheeran’s perspective told from Scorsese’s, executed by his go-to cinematographer since The Wolf of Wall Street, Rodrigo Prieto. Sheeran confessed to murdering Hoffa, the dear friend he served as bodyguard. But Hoffa’s true cause of death is still subject to speculation, as are details of Sheeran’s recollection. “Some people are mulling over what’s accurate and what’s not accurate, and I don’t think that really matters,” Prieto asserts. “It’s all about how this one person experiences their own life. I think that’s the way Scorsese approached the whole story and the camera language.”

From the beginning, Scorsese told Prieto he sought a texture redolent of home movies but not quite, something that evoked how we saw our memories. He didn’t want the grime of Super 8 or 16mm, so Prieto suggested imitating still photography film stocks from the eras: Kodachrome for the 1950s, Ektachrome for the ’60s. “For the ’70s and beyond, I actually went away from [the idea of] memory, the emulsions, to a different thing,” Prieto says. “I shifted to ENR emulation, which is a bleach bypass process of the print.” ENR desaturates the film’s ’70s look to a “present day” image and bolsters its contrast, but there was no printing. The Kodachrome, Ektachrome and ENR looks were emulated through LUTs applied to both The Irishman’s film and digital capture methods.

Scenes that required the CGI de-aging of actors’ faces were recorded digitally on a rig Prieto baptized “the three-headed monster.” Everything else was shot on film. “The three-headed monster had to be digital because Pablo [Helman, VFX supervisor] needed the shutters perfectly synchronized on the main camera and the witness cameras, which we couldn’t do on film cameras,” Prieto explains. The “witness cameras” were two Alexa Minis capturing an infrared map for the VFX team to lay a face on, rigged to the primary camera, the Red Helium. “The camera that best reproduced our LUTs was the Red Helium. It seemed that mapping the colors was much easier, and felt more similar than even the Alexa,” he says. ARRI also didn’t have a mini platform that could record true 4K at the time, and so it would not have fulfilled Netflix’s 4K mandate.

Pablo Helman and ILM applied their own proprietary grain to the digital image to match the footage captured on film. Prieto admits of the process, “It’s a trick; it’s still not very easy to do. There’s a big difference between applying layers of grain on top of an image versus creating an image with grain, so that’s the struggle we sometimes have. I feel it and notice it, but I think that’s irrelevant. For the audience, I think the grain and the LUTs made it pretty coherent.”

Scorsese’s visual grammar has always been open to movement and largely defined by his characters. “The Irishman has similarities to his other movies, but the difference stylistically is that Frank Sheeran is a very different character,” Prieto notes. Sheeran is reserved, matter of fact, and his approach to killing is unromantic, “so we approached the style of the film, when it relates to Frank Sheeran, in a relatively simple way: The camera is either very frontal or sideways, in profile.” The opening oner that finds Sheeran in the common room of his retirement home could have bobbed and weaved between rooms—the location lent itself to that—but Scorsese restricted himself to an imperfect linear move that “weaves and stumbles.” Sheeran’s kills are framed dispassionately, in basic pans, and once, in the Joe Gallo (Sebastian Maniscalco) hit, in a handheld oner, foregoing horrified reaction shots of Gallo’s family.

The exceptions, the flourishes Prieto calls “the Scorsese things,” occur when the movie’s energy and motivations are other than Sheeran’s. Notable exceptions: Joe Gallo’s “celebrity” introduction with TV crew lights flaring a traveling lens, and the assassination of Albert Anastasia, a stitched studio shot to location oner that ends peering into flowers over gunshots, evoke the fanciful Scorsese of old. But when Frank Sheeran is finally alone in the final third, the camera is at its calmest because those outside influences have withered. The ENR LUT has intensified and nearly drained the film of all its color. There are no more de-aging effects; Prieto can finally entomb his three-headed monster and finish with the age-old 35mm camera he knows so well. “I don’t think you can create something that’s not inherently there with the camera,” he says. “If the move is not motivated the audience can tell, and it works to your disadvantage. It’s a delicate line and sometimes it’s hard to find, but directors like Scorsese have mastered it.”