“As the Stories the Characters Tell Begin to Come to Life, the Camera and Lighting Begin Working in Tandem to Alter Reality”: DP Brendan H. Banks on Scare Me 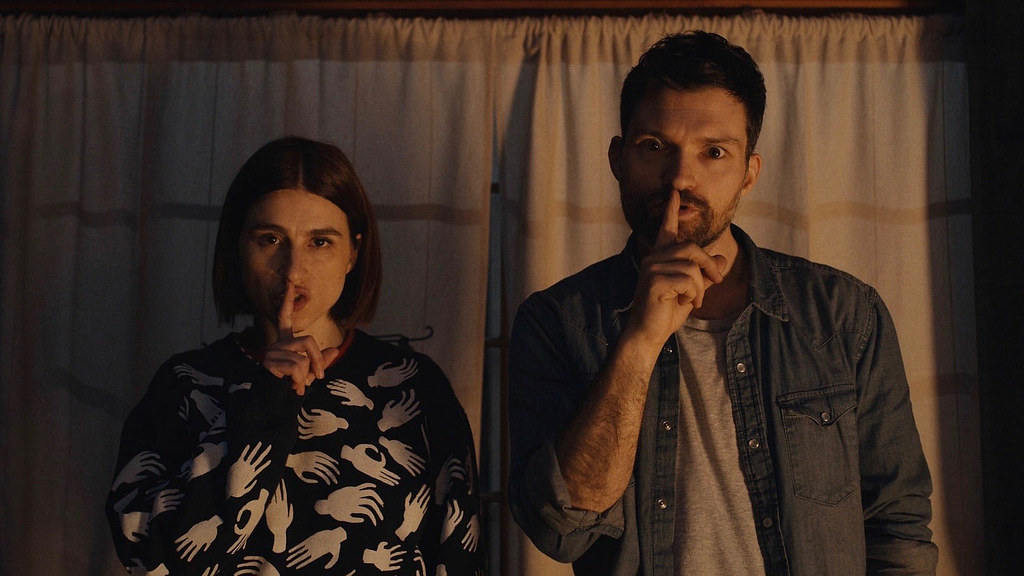 When Fred settles into a secluded cabin intent on completing his first novel, a power outage prompts a horror storytelling competition between two strangers. Josh Ruben’s horror-comedy, Scare Me, delves into the artistic tensions between two writers and the insecurities they face on a greater social scale as the stories they tell begin to come to life. DP Brendan H. Banks breaks down the process of balancing two distinct genres while maintaining a sense of reality within the film’s photographic style.

Banks: Writer/Director/Lead Josh Ruben and I have been collaborating for over ten years on projects of all shapes and sizes. Over the last few years we made some short films together that further developed our creative relationship. When Josh penned Scare Me, he sent it over to me right away and we moved forward from there.

Banks: When I take on a project I first try and read the script through with an open mind and focus my brain on the story itself. This film being a horror and a comedy meant a balancing of some different styles. It was really important that we set the tone of the world from the outset. Simplicity in setups was something I really wanted to keep as our baseline of reality. As the stories the characters tell begin to come to life, the camera and lighting begin working in tandem to alter reality. I wanted to use the tools we had to show what the characters were imagining in the space. A good example is when Fred is acting out his werewolf story; we remain down with Fanny and her general POV, but as Fred gets really into it all and acting things out the camera is suddenly up in the loft with him. The camera also goes from being on sticks from Fanny’s POV to handheld with Fred–I operated the camera on my shoulder in a more frenetic way to show the panic of the character Fred has imagined. We get to have these really fun genre moments and employ a whole host of devices that are intended to heighten their stories without ever getting in the way.

Banks: Josh is a long-time student of horror films, but the genre was something I really began exploring myself only in the last 5-6 years. We had some movie nights together at my apartment leading up to production–one that stood out and we found ourselves referencing a lot was Yorgos Lanthimos’ Dogtooth. The camera placement, blocking, and framing in that film is very interesting and the more you look, the more you notice. I sat down and watched The Exorcist with fresh eyes and was wowed by the strong choices in lighting through that film. I’m not sure you can make a straight-line-reference from any frame in that film to any frame in Scare Me, but it was always in the back of my head when thinking about scenes. The Invitation was another film that we referenced a lot–the deep shadows, amber keylights, and some angles are all things we tried to bring into Scare Me.

Banks: We mostly ran into time and money issues, though pretty much every production has these same challenges. We really wanted to do a lot with a little and that requires some more thoughtful planning and attention to detail to pull off. We had some very intense weather come through right before our prelight day (to the tune of multiple feet of snow covered in ice) and that hampered our ability to move as quickly the first few days. Not to mention talent schedules which had Josh acting without his co-star to play off of for coverage in certain scenes. All the different departments came together to tackle any challenges that were thrown our way, everyone deserves credit for getting this film in the can on our 14-day shoot schedule.

Banks: We shot on a lot of my personal kit, with additional gear provided by Abel Cine NY. Camera was a Red Epic-W Helium and I paired that with Canon FDn primes (modified by Ron Sim at Simmod Lens). I like the combination of slightly funky vintage lenses and the ultra-high resolution Helium sensor. For added texture, I placed a Kippertie diffusion OLPF behind the lens. I really like using the Kippertie OLPFs–because of their position behind the lens, they give a very consistent effect across all focal lengths so you can save time swapping filters in the mattebox.

Banks: From my first read of the script, I knew I had a lot of work ahead of me in terms of designing the look and feel of the film. The reason being that a majority of the film takes place in a small cabin at night, during a power outage. I like to begin from a place of realism with lighting so I first worked on what our key firelight would be. I worked with gaffer Alberto Sala to design a custom built firelight rig that fit into the exact dimensions of the hearth at the location. It consisted of a 3-tiered rig with a mix of twelve 100w and 150w frosted and unfrosted bulbs cross-wired into separate flicker boxes that we dialed in to our taste. Albi also built a smaller covered wagon on a flicker box that we could wrap around our talent or use to accent additional areas where we wanted more firelight. To balance this very warm, sourcey light we added a base layer of ambient moonlight via a Joleko bounced into bead-board that we rigged to the ceiling. Moonlight also pushed through the sheer window curtains to give depth to the space. When we ventured outside for day time work, we lived with mostly natural light, bouncing and negative-filling where appropriate.

Banks: The first scene of the film takes place in a car where our protagonist is waiting to arrive at his rented cabin and interacts with his over-enthusiastic taxi driver. Process trailers were never a possibility for us, but we also didn’t want to poor-man’s-process in a studio–I personally didn’t think this would feel real enough and because it’s the first scene in the film, it wouldn’t be a good way to begin. Instead, we were able to use a trailer and a car-mount to place the camera for coverage of our driver. For coverage on Fred, I operated the camera handheld from inside the car. The natural scenery passing by in the background was important to this feeling of departure and isolation for Fred and though it’s always tough doing moving car work, it was ultimately the right way to capture the scene.

Banks: We knew from the outset that we wanted to work with Jaime O’Bradovich of Company 3 for the grade–Josh has worked with him before on multiple projects. I was lucky enough to spend some time chatting with Jaime before we began production and he lent a really wonderful piece of advice (though I’m paraphrasing)–the more work you can do on set to prevent correction work later, the more time we can spend on the grade. This is something I always strive for when lighting because it results in a more robust digital negative. My amazing gaffer Alberto Sala also has the same approach so we worked on things like getting correct main exposure levels, adding color-contrast by coloring our shadows blue (moonlight), and placing intentional eyelights to properly highlight the actors’ performances. When we got into the DI, Jaime was able to see what we had done on set and then run with those concepts and looks we created. Jaime’s artistry and expertise was put to great use in some techniques he developed to “dig in” to our shadows to help pull our talent out from darkness in takes or scenes where there was lots of movement or coverage in single setups. The final look is a complete collaboration between all departments, including but not limited to camera, lighting, color, production design, costume design, hair and makeup.