“We Wanted to Create a Sense of Liminal Space”: DP Laura Bellingham on Amulet 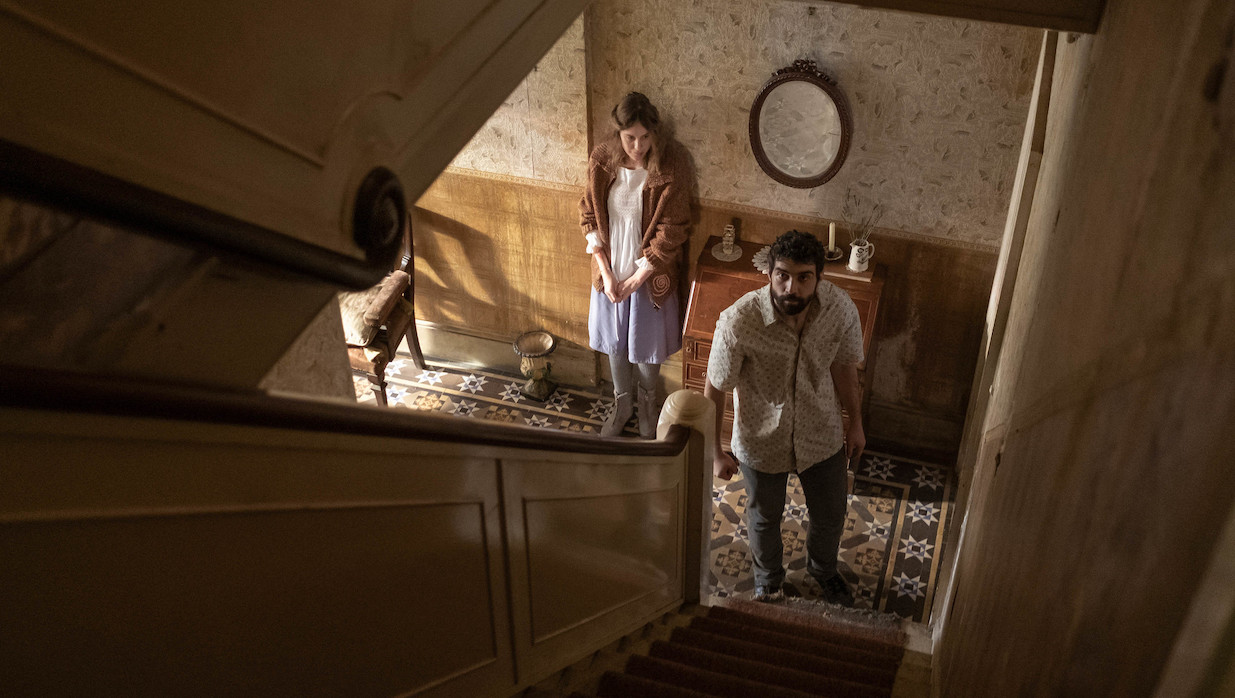 After becoming homeless in London after an accident, ex-soldier Tomaz finds himself employed by Magda, a woman who needs help looking after her ailing grandmother. While the house is dilapidated, Tomaz is grateful for the opportunity, and eventually begins to fall for Magda—until he realizes that something disturbing is going on, and perhaps the old woman who never leaves the second story is behind it. Cinematographer Laura Bellingham explains her commitment to style while shooting Romola Girai’s Amulet.

Bellingham: The project came to me via a longtime collaborator, Matt Wilkinson, from Stigma Films. I already knew of Romola’s work as a writer/director and was excited about the prospect of working with her. I connected with the script straight away and started a mood board as I was reading. Thankfully, Romola and Matt responded positively to my proposal on the look.

Bellingham: The house’s location was pivotal in establishing mood. Tomaz’s experience of the space is in constant flux and we wanted that to be built into our camera language. We sought to acknowledge the film’s horror roots through movement and framing, but also the perspective of Tomaz, his “gaze,” specifically where Magda was concerned. It’s as if we are inside a gothic romance at times, and at times the house is like a womb protecting him from the harsh isolation he experiences in London—before we spill into true horror. Our approach always revolved around Tomaz’s shifting psychology and persona. We wanted to create a sense of liminal space, that he is on the threshold of transformation.

Bellingham: We built a collage of reference images including a lot of photography (Francesca Woodman among others) and watched several films but the go-to references were Andrzej Żuławski’s Possession, Roman Polanski’s The Tenant and Peter Strickland’s Katalin Varga. The apartment in Possession had a big influence on my approach to the house, I kept returning to that film as well as the daylight-motivated interiors in a beautiful looking film called The House of Others by Rusudan Glurjidze.

Bellingham: Budget. We knew it was essential to work with two cameras to build a sense of time passing in this unsettled sanctuary. That meant we were quite tight on what extra accessories we could afford to have and when. It was a challenge to keep abreast of this during an intense and often shifting schedule. It required us to be quite bold in our decisions on how we’d approach a scene based on the tools we had at our disposal at that time.

Bellingham: We shot on minis and sometimes an Amira. We wanted the camera, like the house, to feel like an impassive observer, spying on Tomaz. We could rig the minis easily in corners or in cupboards or to peer around corners. We used Cooke Speed Panchros for the present day sequences combined with soft FX filters, as we felt it brought a nostalgia to the romantic scenes. But we switched to Super Speeds in Tomaz’s flashbacks to have a cooler, more acute look, which was bloomed and softened with Low Cons. There was also an Angenieux Optimo zoom and a Lens Baby for more subjective stylized moments.

Bellingham: Story-wise, there is no electricity in the house, so we had an approach based on the natural trajectory of the sunlight as it moved around the house, and at night we’d do the same with sodiums. My gaffer Ben Millar and I broke the house down into zones—we’d have a go-to set up for each zone, but would introduce subtle shifts in color as the story progressed. We experimented a lot with the hue of our sunlight depending on Tomaz’s state of mind or how he interprets or misinterprets events.

Bellingham: There is some David Cronenberg inspired puppetry in the film that needed to feel embedded in the world and was augmented in VFX. Also a pivotal climax scene has a large VFX element that of course was not realised at the time of shooting, and yet we had to shoot as if it existed. We had a really creative collaboration with Bait Studio on what that might look like in keeping with the mood and lighting, but when you’re shooting something like that it still feels like a blind leap of faith you’re taking together. That said, we were blown away with what they came up with!

Bellingham: We really committed to realizing our look on set, specifically with our palette, however we went into our grade knowing we’d need our colorist Max Horton to tweak our moonlight for a more de-saturated feel, as we didn’t have the budget to light from outside on the upper floors and so our source options were limited. We also knew we wanted to add grain, we’d rated the camera at 1280 for more texture in the flashbacks but we pushed it even more, to an almost 16mm look in the DI.