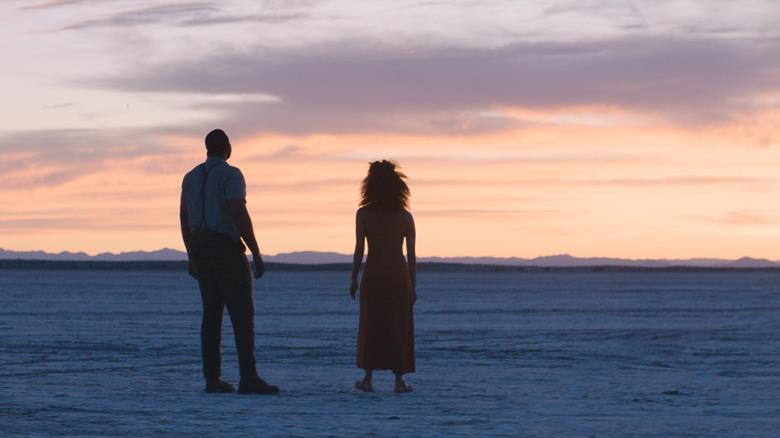 In Edson Oda’s Nine Days, five personified souls outside of the realm of our reality compete for the opportunity to be born on Earth. A man named Will (Winston Duke), who once experienced being born, judges the competitors over the course of nine days—only one will be allowed to continue their existence, while the other four will cease to exist. Cinematographer Wyatt Garfield details the unique cinematic language of Nine Days for Filmmaker.

Garfield: I had just finished some videos for The Lumineers that had some shadowy interior work that was relevant to Nine Days. I think that’s what caught director Edson Oda’s eye.

Garfield: Edson had already developed a deep cinematic vocabulary for the film before I came aboard. He wanted to walk a very fine line between realism and surrealism, and that became the central challenge, as well as figuring out how the camera should engage with the newly materialized souls.

Garfield: We looked at many scene specific framing references, especially for the interviews (Schindler’s List, Taking Off, There WIll Be Blood, Seven). Gregory Crewdson, for his strange surrealism, was often a point of reference for lighting, but only as a direction to move toward: we always stayed more grounded in realism than Crewdson.

Garfield: The biggest challenge was getting 30 vintage televisions to play back the “real life” footage at 24 frames per second. This required a massive array of vintage equipment to realize.

Garfield: We shot on Alexa Mini with Elite Anamorphics. Elites are soft lenses with a good amount of distortion but not enough that it draws attention to itself. Will’s world isn’t totally concrete, so we wanted some lenses that would bend and breathe but not in an intentionally stylized way where the effect is obvious.

Garfield: We had compact HMIs outside of every window backed up as far as possible with the narrow lenses to simulate parallel sun rays. These rays would reach into the dark interiors of the set and skip around, and then we would augment as necessary and control them with window dressing. We wanted a feeling of changing time of day, so it was important to have hard, realistic shafts of light that would interact with the environment.

Garfield: We were all very nervous about the last scene, because we had no idea what was going to happen until we filmed it. Filming a three page monologue over the course of one sunset without any rehearsal or choreography is nearly impossible, but I think we got away with it!

I’ve worked with the colorist Nat Jencks on several films and always we shoot tests and choose or create a LUT, view the LUT on set, bake it into the dailies, and then start the DI process with it. It’s essential for the look to benefit from the colorist’s input before the look gets baked into dailies, as we all tend to get attached to the way dailies look. On Nine Days, we only went through a process of discovery on handful of scenes (mostly night exteriors).