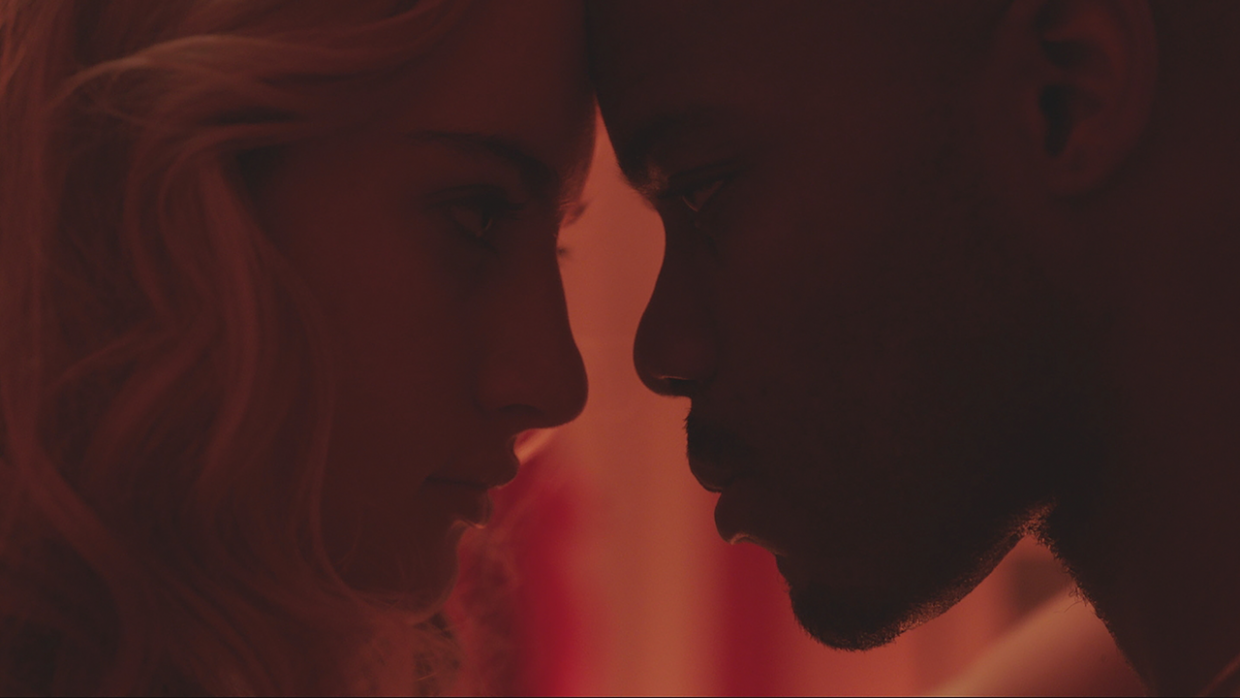 by Scott Macaulay
in Directors, Interviews, Screenwriters
on Apr 28, 2020

Played with a compelling mixture of sensitivity and suppressed rage by Joven Adepo (The Leftovers, Sorry for Your Loss) Daniel, the young auto mechanic and ex-con at the center of Kerem Sanga’s The Violent Heart, is a man imprinted by the past. We meet him first in flashback when, as a young boy, he crouches in dark woods, watching a horrible crime unfold. And while the exact events of that evening remain a mystery for much of the story, the powerlessness Daniel feels that night, and the aftermath of guilt, are all we need to understand the complicated shadings of his character. His criminal record makes Daniel’s dream of joining the Marines far from certain, and when a local high school senior, Cassie, takes a sudden romantic interest in him, her free-spirited ardor initially seems a trap.

Watching Adepo essay Daniel’s softening around Cassie, the way the man moves past distrustful unease towards love, is one of the real pleasures of Sanga’s film, a surprising and passionate blend of young romance and Southern noir that boasts a lush visual sensibility and powerful performances by not just Adepo but also Van Patten and Lukas Haas. (Haas, playing Cassie’s father, is a casting tip of the hat that carries its own metatextual echo — a callback to Peter Weir’s 1985 Witness, in which Haas was the young boy whose life was altered by the crime he observed.)

The Violent Heart, a 2020 Tribeca Film Festival Narrative Competition title, is Sanga’s third feature,and his first since the 2016 Sundance pick, First Girl I Loved. On the eve of what would have been the premiere of his film before New York audiences, Sanga talked to Filmmaker about the mix of tones and genres in his film, why filmmakers should never lose their sense of ambition, and how the pandemic has impacted both his film and his future creative work.

Filmmaker: The Violent Heart contains elements of noir mystery, family drama and young romance. What was the inspiration for the story, and could you discuss your approach to balancing these different genres that co-exist in the picture?

Sanga: Usually my ideas are very grounded and slice-of-life-y. So it was quite surprising to suddenly imagine a story that was chock-full of “big-cinema” elements (murder, mystery, family discord, romance, tragedy, suspense, violence.)

As for balancing the different genres, I saw two options. The first was to make a muted, somewhat depressing drama; the kind of movie a critic might refer to as a “piece.” The other was to do a go-for-broke melodrama, something Universal might have released in the ’50s, with a trailer whose narrator would tease “What’s in store!” Well, I went for the second option. I decided to be very strict about the visual approach and the score. The story could go all over the place, passing through different time periods and so-called genres, but the visual approach and the score would be simple, consistent, and elegant.

Filmmaker: Without going into spoilers, your film starts by showing a crime from a child’s POV, a crime whose reverberations echo throughout the film in the behavior and motivations of the lead, Daniel, played by Jovan Adepo. What sort of work did you do with him, either in rehearsal or in the direction of his performance, to keep this backstory present in subtle ways?

Sanga: The short answer is Jovan is a real artist and he did all of that work. He read the script, we met, and he spoke to me for hours about how he could make it personal. In fact, what he said was so personal that I wouldn’t feel right going into it. Suffice it to say, he really moved me. Of course, I had a few thoughts of my own. I told him I wanted to feel like we were watching a young man who was play-acting at being ‘hard’ but was deep down still a sensitive young boy.

Filmmaker: This is your third feature collaboration with DP Ricardo Diaz. Tell me about your collaborative process, and what were the visual ideas you were both keen on expressing with The Violent Heart.

Sanga: Rick is a great collaborator. He approaches each project on its own terms. Style always comes from story, never the other way around. He is like a chameleon. I admire that about him.

In our first conversations, I told Rick I wanted the film to feel like a Storybook with a capital “S.” Rick liked the sound of that. However, neither of us had any idea what that meant in practical terms. So we went off on our own to think about it. When we met again, Rick said he’d found the perfect approach. He presented me with the work of photographer Philip-Lorca diCorcia. The photographs had the appearance of being spontaneous, but on closer inspection you could tell that they were in fact carefully staged narratives. There were some things about them that I didn’t think were right, but the important thing is that it got us thinking in practical terms. We came up with some rules. One: everything in the frame needed to look pre-arranged. Two: we’d occasionally employ a small practical light of a different color temperature, such as a neon sign, to give the scene a spooky quality. Three: in the DI, we’d push all the colors towards a high contrast, super-saturated space reminiscent of Kodak reversal film, except we’d forgo all grain. The resulting image was composed, uncanny, lush, and smooth. Just like a storybook! I was very pleased with how it turned out.

Filmmaker: In a 2015 Indiewire piece, you advised independent filmmakers to “stay ambitious” in order to find success, and you cited a particularly ambitious location choice for your film, The Young Kieslowski. What was that ambitious element of The Violent Heart that you wouldn’t let go of?

Sanga: This time it was the scale of the production. Typically, my instinct is to make my film for whatever amount of money I can get. But with this film I needed to be able to give my heads of department more resources, so that we could control the colors and textures in the frame. That meant having a lot of patience when it came to raising money. As is typically the case, you don’t get all the resources you want, or even the bare minimum you think you need. This is where producers come in. A great producer will know when to allocate money to a problem, when to push for a creative solution, and when to have the foresight to say “we don’t have enough, we need to wait until we do.”

Filmmaker: Finally, having been selected for Tribeca but screening privately, you’re in the first group of filmmakers whose release is impacted by the coronavirus pandemic. How are you handling the current moment? What is your creative life like right now, and, although it may be awfully early to say, how do you feel this crisis will affect your storytelling going forward?

Sanga: What is going on right now is mind-boggling. I think a lot about the technology and resources we have to combat this existential threat. I am obsessed with the thought of what the perfect use of these resources would look like. If only a benevolent AI were at the helm, how brilliantly we could succeed! Then I think about the ruling class that is actually at the helm, and how beholden we are to its collective competence and mercy. At that point it is very easy to give in to cynicism and despair. But I focus on what I can do. The people that give me hope are those that sincerely believe in civic duty. Political activists, journalists, health-care workers. As far as how this will affect my storytelling, I suppose it would be weird for a movie to just ignore the fact that coronavirus was a thing. Then again, the world is literally on the verge of environmental collapse, and most films (including every one I’ve ever made) totally ignore this unpleasant reality. Maybe what I’m trying to say is that in times like these, I find films like First Reformed and I, Daniel Blake to be the ideal. Great films about things that matter. Having said all that, the last two films I watched were Step Brothers and Best In Show.