“People are Actually Reading My Scripts When I Send Them!”: Brea Grant on Tribeca Premiere 12 Hour Shift 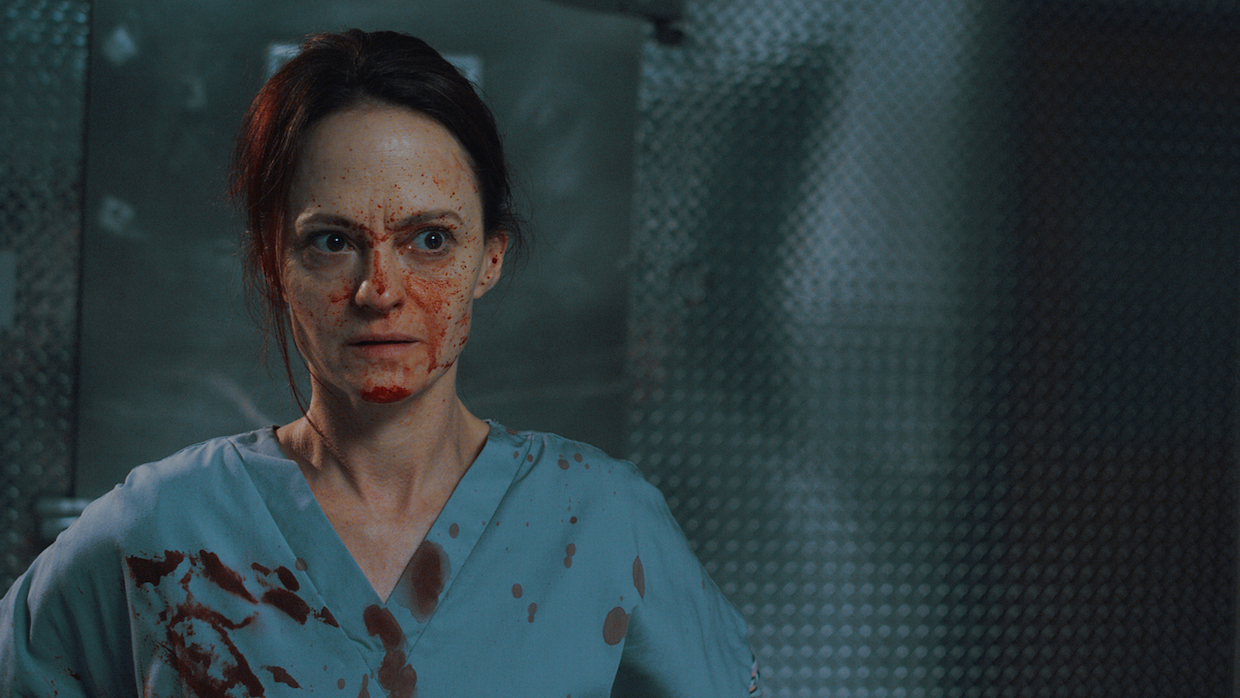 by Steve Dollar
in Actors, Directors, Festivals & Events, Interviews, Screenwriters
on May 13, 2020

It was to be a triumphant springtime festival run for Brea Grant. The actor, writer and director (who first won notoriety a decade ago on the NBC series Heroes), had not one, but two, premieres on her calendar at the season’s biggest film festivals, South by Southwest and Tribeca. Grant wrote and has the lead role in Lucky, a thriller about a self-help author besieged by a stalker. The SXSW selection got sidelined as the festival became one of the first to cancel amid the COVID-19 pandemic. Last week, 12 Hour Shift, the pitch-black comedy Grant wrote and directed, likewise saw its physical premiere scratched when the Tribeca Film Festival pivoted to a partial presence online, where the film screened for press and industry.

Rollicking and gleefully unhinged, 12 Hour Shift tracks the sudden collapse of a black-market organ trade run out of a small-town Arkansas hospital by a drug-addicted nurse. Mandy is played by much-admired Austin, Texas performer Angela Bettis with steely-eyed grit and just enough gravity to keep the plot’s spiraling mania glued to an increasingly sticky hospital floor. Trouble first arrives in the form of Mandy’s cousin-by-marriage, the IQ-challenged Regina (Chloe Farnworth), the hapless delivery gal in the used-kidney game, who plays an arguable psychopath with adroit screwball timing. As things go from bad to worse to genuinely gory, the pace never wanes. Filmmaker spoke to Grant recently as she rode out the ongoing quarantine at home in Los Angeles.

Filmmaker: So what got you thinking about harried nurses who become Razorback organ snatchers?

Grant: I love urban legends, and this is a little bit of a take on an urban legend. I wanted to take the idea of the person waking up with the kidney missing in the bathtub and run with it. At the time I was writing, I was spending a lot of time in hospitals because of family. I was so interested in the lives of these nurses around me. They have such hectic lives, but they’re also no-nonsense in a way I can really appreciate. I ended up combining those ideas in my head. The story originally was around this one main character, and what she was going through selling organs on the black market, then all these other characters started coming into play. I come from east Texas, and a lot of these characters are people I have known over the years.

Filmmaker: I wondered how Arkansas become your location, but it makes sense now.

Grant: Arkansas has great tax incentives. I just want to keep shouting out Arkansas in interviews. They were really great to us. Locations were so much easier than a lot of other places. Finding people to be in the movie was a breeze. It was a really film-friendly place. I would go back.

Filmmaker: They had a nice tax credit?

Grant: A really nice tax credit and it’s not just for huge movies.

Filmmaker: Are you naturally drawn to black comedy? I guess you could do a hugely grim movie about the black market organ trade, but it might not sell too many tickets.

Grant: I don’t know. Would it? I’m never thinking about what would be appealing, for better or worse. In my writing, I run the gamut. I wrote a movie called Lucky that was to premiere at SXSW, and that is just a dark movie. It has some humor in it, but I would not call it a black comedy. 12 Hour Shift is kind of wacky. I think it was already very funny and silly in the script, and the cast was full of improvisers so they put their own funny spin on it. Once I’m there as a director, I tend to want to make things funnier and sillier, see what works and push that humor. It’s where my brain is always going to want to go.

Filmmaker: Did you have a meter in your mind to gauge how far to go? They say the camera adds 10 pounds to a person. Does it also add 10 pounds of funny?

Grant: We had a very grounded anchor in Angela Bettis. Angela’s character is not super over the top, her reactions are never huge. Because of that, I felt we had some leeway with the other characters, especially Chloe Farnworth who plays Regina. Chloe could be wild in this character because Angela is so relatable. I took out some stuff. There were improvisations that on set were hilarious but when you get into the edit room, you realize oh no, this will never work in front of an audience.

Filmmaker: Things get really complicated, with all these characters running amok and lots of time bombs going off by the end. How tricky was that to design and execute?

Grant: We had very little prep time but the script had been worked through quite a bit. I figured out where people were at certain times when I was writing. In editing, we had to fix a few things when people were in places and we realized they couldn’t be in those places. We also had an incredible script supervisor. Indie filmmakers, get yourselves a script supervisor if you are doing a complicated movie!

Filmmaker: When you’re writing with this regional specificity in mind, what concerns do you have about getting it right? Or does it come intuitively, based on your experiences growing up?

Grant: I lived in east Texas until I was 18, and in Texas until my mid-20s, so it all comes from my youth when I knew people like this. The film is set in the ‘90s, when I was growing up. I tried to capture the vernacular. I also gave the actors some leeway. A couple of actors are Southern, and I wanted them to put their own spin on it. For me, it’s a love letter to those small towns. People in small towns are so interesting, because they get to develop in these ways you wouldn’t in a bigger city. You know everything about everyone in your small town and for some reason that gives you a little more freedom to be yourself. I wanted to capture that with these people who were exactly who they meant to be—not many people putting on airs, if that makes sense. The litmus test for me is, would my aunts think this is funny? A lot of my aunts still live in Texas. They would not appreciate the cuss words, but they would think it was really funny.

Filmmaker: You’ve got to make it your own, but I think most people would look to Fargo as the ultimate template for the regional caper comedy. How big of a shadow does that one cast for you?

Grant: The thing is with film at this point is we are constantly imitating whether we realize it or not. I was more influenced by things that I think of as very east Texas. The movie that really struck me most recently is [Richard Linklater’s] Bernie. That’s set in the town [Carthage] right next to mine. My dad knew some of the people and loved the movie. It had that east Texas style that is very, very hard to capture. There’s this documentary from the ‘90s, Hands on a Hard Body, also set in the town right next to mine. Brilliant documentary, 100% captures where I’m from.

Filmmaker: What rules did you give yourself to guide the film’s topsy-turvy moral universe?

Grant: I wanted to mess with reality. This is a very heightened idea of what this movie could be. I wanted the Mandy character to be an interesting example of a female antihero, that was my major goal. I feel like we see all of these male antiheroes all the time. I used to watch that show House, and he’s this curmudgeonly, angry guy but at the end of the day you like him because he solves everybody’s problems in his own way. That’s sort of what I was looking at for Mandy. She has all these problems: She has a drug addiction, she lies, she kills people. But we still are on her side at the end of the movie. We don’t have enough examples of that as females go.

Filmmaker: Is it fair to say your interest is more writing and directing at this point?

Grant: The biggest question in my household. I see myself as a filmmaker, in whatever capacity that means. For Lucky, I was the writer, but I think Natasha Kermani was the best director choice for that project. For 12 Hour Shift, I think because of my sensibilities, I was the best director, but I also didn’t think I was right to act in it. I’m taking it on a case-by-case basis. If you put a gun to my head … I would say filmmaking in the genre world. I’m definitely less interested in acting at this point. There’s still things that are really interesting to me, but it’s not what I spend my days working on. I spend my days writing, figuring out what my next directing project is.

Filmmaker: Have you noticed anything changing for women directors, in genre or otherwise?

Grant: I directed my first movie in 2013. I have been wanting to direct and write since then and it’s not for a lack of trying. I have written a lot of scripts in these last seven years. Recently, instead of me banging down doors I’ve had a few people call me. That has been a huge change for me and I think it’s a change in the industry and what people are interested in. People are interested in hearing women’s voices and what we have to say. In the last three years or so, I found that people are actually reading my scripts when I send them! In the genre space, there’s very few female directors but we all know each other. I find them to be very encouraging but have to say so are the male directors in the genre space. Transitioning from an actor to a director is tough because you have to convince people you’re serious. In the genre space it’s almost more welcoming. I see a lot of women directing who used to be actors. We’re seeing more women and we’re welcoming those voices in a nice way. We’re all making room for them. There are so many female genre fans! Horror people love horror movies. We’re gonna keep watching them!