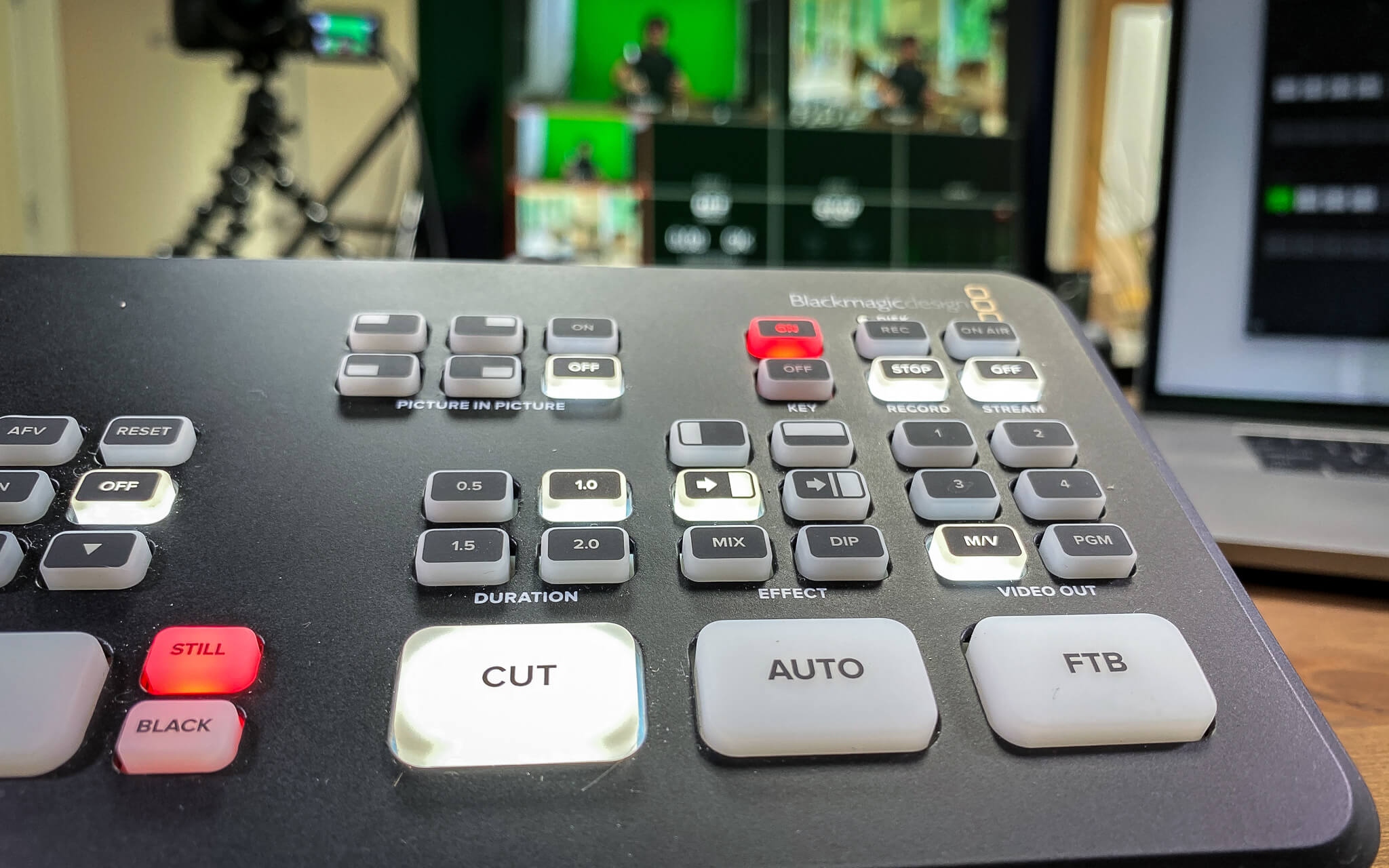 by Joey Daoud
in Cinematography, Filmmaking, Production
on Jul 29, 2020

In the early days of the global shutdown, even before the canceled NAB would’ve taken place, Blackmagic Design had some product announcements that ended up being very appropriately timed: Updates to their Pocket Cinema cameras and the ATEM Mini, and the release of the brand new ATEM Mini Pro.

I had a chance to chat with Bob Caniglia, Director of Sales Operations in North America for Blackmagic Design, about the new updates, as well as some thoughts on the new ATEM Mini Pro after using it for a few weeks.

Working our way down the stream, let’s start with the Pocket Cinema Camera updates. Regular broadcast cameras use SDI cable connections, which can run longer distances and are more secure than HDMI. In addition to audio and video, they can also carry additional data like tally light (is the camera live or on standby?) and commands to adjust the camera settings.

First is tally light ability. Red if the camera is live, green if it’s in the preview screen (if you have program/preview mixing enabled). And orange if the camera is recording internally, which is a nice way to get ISO recordings in Blackmagic RAW if you later wanted to edit your multicam shoot into a higher quality video.

You can also control the Pocket Cinema Cameras from the ATEM software on your computer — the exact same software that works with the broadcast level ATEMs and studio cameras. You can adjust exposure and color temperature. With a compatible lens, you can adjust focus and zoom. And if you’re recording the program output it will also trigger recording internally on the camera.

One thing to note — this is not a look being applied by the ATEM or your computer. This is adjusting the actual Pocket Cinema camera settings internally, so you can’t use another camera and change how it looks via the ATEM. Also unknown if BMD will open up an SDK for other manufacturers to tap into the HDMI camera control ability, so as of now this will only work with the two versions of the Pocket Cinema Cameras.

The big announcement was the release of a new version of the ATEM Mini — the ATEM Mini Pro (priced at $595). While looking extremely similar and having the same four HDMI inputs and two audio inputs, the Pro adds one huge feature — hardware encoding.

With the ATEM Mini, if you want to live stream to YouTube or Twitch you’d plug the ATEM into your computer via USB. The ATEM shows up as a webcam source (great if you want to take your Zoom game to the next level). You’d then use a software encoder such as OBS to stream to whatever service you want (usually via RTMP). This works, but it puts the process of encoding in realtime on your computer, which can be taxing and cause issues.

With a built-in hardware encoder, you reduce the need for a computer (you still need one to set up the stream details) and greatly improve the reliability of your stream by using a dedicated hardware encoder with built-in buffering.

As Caniglia explains: “The good part about being able to handle the encoding in the box is that the power of our encoder generates a stream that doesn’t have dropped frames. And dropped frames can happen when the CPU of the computer you’re trying to stream with gets overloaded.

“This way, the computer that it’s connected to is not doing any of the encoding. You can just use that to control the ATEM software, and that reduces the load. In theory, if you had your own streaming capability, you know, ability to stream to a direct link, you could really put the bandwidth up to 70 Mbps per second, which would be pretty nice.”

70 Mbps is the max bitrate the Pro can encode at (and it caps at 1080 resolution), which is way higher than the recommended specs for just about every streaming service. However, the Pro has the ability to simultaneously record your program directly to a hard drive plugged into the USB-C port while live streaming. But because there’s only one encoder, you can only stream and record at the same bitrate. So if you want a high-quality recording and stream to YouTube at the same time, you better have lots of upload bandwidth.

The other major addition to the ATEM Mini Pro is a multiview screen with the HDMI output.

The multiview screen has two larger boxes for your preview and program feed, plus eight smaller boxes — four for the four HDMI inputs, one for whatever media is loaded from the media pool (you can load up to 20 images), one for the recording status, one for streaming/buffering status, and one for audio levels.

The ATEM Mini comes set to automatically cut bus — meaning as soon as you hit a source button it’s automatically live. But with the multiview screen, it’s now much easier to work in a more traditional broadcast workflow of program/preview, which is an option you can enable.

Hands-on with the ATEM Mini Pro

I have a film, not a broadcast background. However, 2020 has been the year of live streaming. Through lots of broadcasts and research and tests and disasters, I’ve come to two conclusions:

So let’s look at the ATEM Mini Pro through the frame of these two ‘truths.’

So as mentioned before, the biggest upgrade is a built-in encoder. Does that justify the 2X price increase over the original ATEM Mini? Yes.

Caniglia explained how the built-in encoder offloads the intense computer processing that’s involved with a software encoder when live streaming. But if you need an even more ironic example, just look at the live broadcast I did with Caniglia for this story. Right as I transitioned to the live shot of myself and Caniglia for our live chat, Wirecast, the software encoder I was using, crashed. I had to reboot the system while the live stream sat frozen (that’s why the YouTube recording starts abruptly).

Offloading the encoding from the computer to a dedicated piece of hardware is huge. And the price is hard to beat. Any other hardware encoder on the market is going to be over $1,000. I bought the ATEM Mini Pro just to have as a single-source hardware encoder, with the option to mix additional shots in as a bonus.

That said, it’s not the most feature-rich encoder out there. The options are limited to six bitrate presets and only three streaming services: YouTube, Facebook, and Twitch.

Now there is a way to update the XML file to add additional services, such as Vimeo, Twitter, Restream, or Switchboard. While there’s no official documentation on how to do it and what parameters you can safely change, there are a few good YouTube videos to guide you through it.

The other major addition to the Pro is…more buttons! And this is a great thing. While the entire ATEM can be controlled via software on a computer, when it comes to live mixing, time matters and being able to perform an action at the press of a button rather than digging around a menu system is vitally important.

The additional buttons are controls over recording and streaming plus HDMI output controls for viewing the multiview screen, program, preview, or any of the individual sources fullscreen.

However, it still doesn’t have any buttons to switch still images from the media pool or cue up a file from a connected HyperDeck. You’ll need to click away on the computer for that.

Pulling the ATEM out of the box I was struck by how hefty it is. While it has a plastic look, it has a nice weight to it that feels like a quality build.

I briefly experimented with the keying ability. It uses the same keyer as all the other pro BMD switchers, which covers lots of options for tweaking the key. With a few simple adjustments I had a really impressive looking upstream key mix. Much better quality than I’ve experienced with software-based keying options.

I mentioned how the encoder is the big selling point for the Pro, though it lacks in options you’d find in other dedicated hardware encoders. However, this is the first encoder to come from Blackmagic Design. I hope to see them continue down this line with a dedicated encoder with SDI, something in line with the AJA HELO or Teradek VidiU.

That said, this is a phenomenal all-in-one streaming kit to create a professional live stream for novices and pros alike.