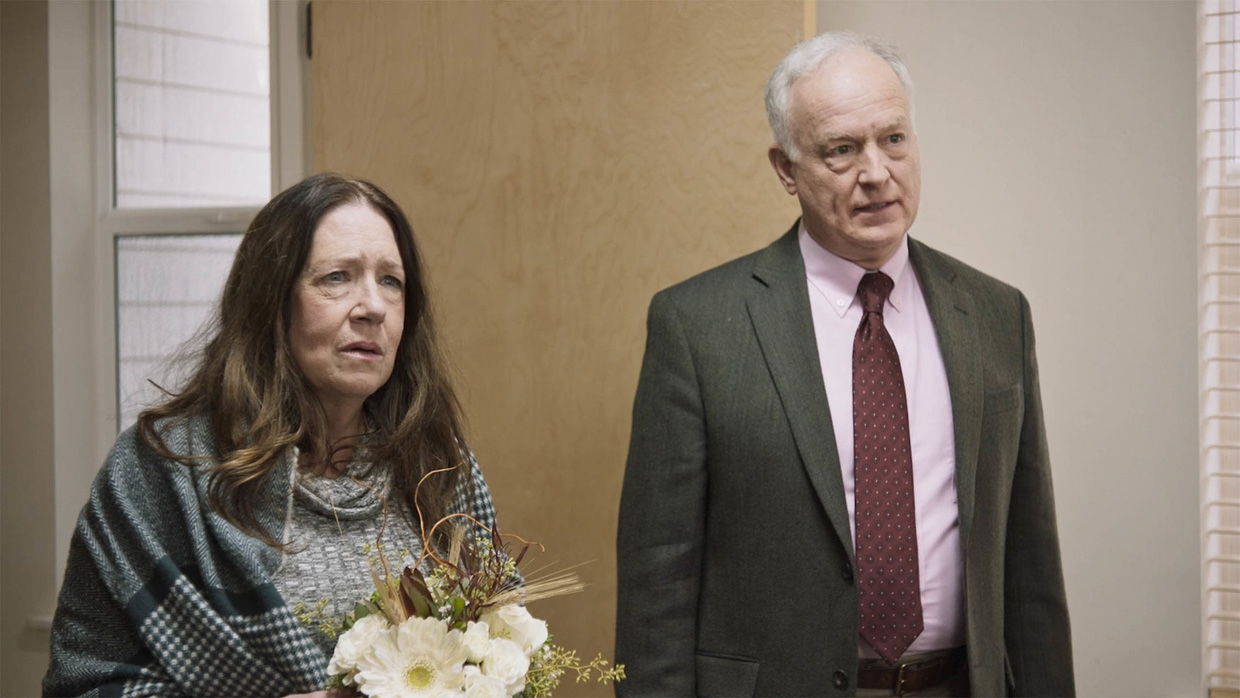 Fran Kranz’s Mass is the rare film that explores the aftermath of a tragedy rather than the tragedy itself. Some years after the events of a school shooting, the parents of a victim (Jason Isaacs and Martha Plimpton) plan to meet the parents of the perpetrator (Reed Birney and Ann Dowd). Editor Yang-Hua Hu shares what it was like to practice restraint in the film’s edit but still maintain interest in a movie with a mostly static setting.

Hu: A close friend of mine, Mary Chin, was asked to do the assembly job, but later she had schedule conflicts, which is why she referred me to Fran. I got involved after they finished production in December 2019. After reading the script, I immediately scheduled a date to meet up with him. During our conversation, I found that he wanted to tell this timely story for all the right reasons. I liked his ideas and direction of the film. We clicked right away and weeks later the editing started.

I think trust and having the same vision as Fran’s were key factors. When he mentioned the film had a similar vibe of 12 Angry Men or My Dinner With Andre, I immediately knew where we were going. Many people say the relationship  between the director and the editor is like a marriage; that they work toward the same direction. I trust Fran’s intension and I believe I could help him present the film in the way he wanted.

Filmmaker: In terms of advancing your film from its earliest assembly to your final  cut, what were goals as an editor? What elements of the film did you want  to enhance, or preserve, or tease out or totally reshape?

Hu: When I finished the rough assembly, I did enjoy the cut but I knew I needed to pick up the pace and make sure the audience would be on board with our characters throughout their difficult journey. Sometime it’s hard for the viewer to pay attention to a dialogue-heavy film, and when the majority of it takes place in one room. I also wanted to make sure the audience could relate to at least one of our characters’ circumstances.

At the same time, I wanted to preserve the long takes if I could. I didn’t want to force a cut. If the take could survive without a cut, I would keep it going. I tried to use the long takes to cover the whole scene in the beginning and during some intimate, personal and silent moments throughout the film. I also use it for our characters when they have a long monologue. Using the long takes, I hope to make the viewers feel  like they’re in the moment with the characters; breaking the editing rhythm. I know sometimes long takes can be showy and distracting, however, I trusted our footage and our talented actors.

Filmmaker: How did you achieve these goals? What types of editing techniques, or  processes, or feedback screenings allowed this work to occur?

Hu: Communication is the key. Fran is a great collaborator and I worked with him closely. I would present him my cuts and often played the devil’s advocate with him. If we found some areas weren’t working for the scenes, he would often have alternate takes marked down in his notes to suggest to me. Sometimes he would show me his roughly cut together clips as a reference to get the idea across, and I could build upon that. During our many conversations, we were able to find a path forward and keep moving toward our goal.

Hu: After graduating from USC, I was paired with an industry mentor, Sarah Boyd. She is an amazing director/editor and introduced me to her close friend and fellow alum, Cecily Rhett, who was looking for an assistant editor for a feature film, Sister Cities, based on the play of the same name. That was my first assistant editor job, and I  learned a lot from working with the very talented Cecily and director Sean Hanish.

Later, Sarah told me the ACE Diversity Program was accepting applications. Luckily, I got accepted and this mentorship program expanded my network further and helped  me grow. From there, Mark Yoshikawa passed along my resume to Richard Chew who was looking for an assistant editor for Emilio Estevez’s film The Public. During post-production on this project, I worked closely with both Richard and Emilio. At  first, they let me cut a few scenes, and then I contributed more and more, building trust, until they bumped me up. That was my first on screen feature editing credit and I had the great honor to co-edit with Richard.

I think my experience working with Emilio and Richard had great impact of my work on Mass. I learned a lot of useful editing techniques from Richard such as how to  use the long take and usage of action versus reaction shots within the scene. By  working with Emilio, I learned how to keep the movie flowing, knowing when to remove redundant information, keeping the viewers interested and engaged thought out long conversations. These are the techniques I used on Mass. Both Emilio and Richard are amazing storytellers and wonderful people to work with. After working with them, I told myself I hope I can keep working on important subject matter and that work can have some positive impact on the world. When I read the script of Mass, I immediately knew this was a project I wanted to be part of.

Hu: In Mass, we used both Premiere and Avid Media Composer. For me, I think editing software is a tool. It depends on the workflow and the post-production schedule. I  don’t limit myself to only one tool as long as it can help us present the best version of the film.

Filmmaker: What was the most difficult scene to cut and why? And how did you do  it?

Hu: In the film, there is an area we cut to the field after Jay can no longer hold back, bursting out in anger about the shooting. After he finally collapses, we cut to black, bring back the field, and the film ratio changes from 1.85 to 2.4.

We worked on this area for a really long time. We kept going back to revisit this area. This moment is the climax of our film. We treat it carefully because we don’t want to risk becoming indulgent. Originally, the plan was to stay on the field the whole time during Jay’s emotional speech. The reason behind this was to give our characters privacy. As the story was fiction but based on reality for too many, we wanted to present this carefully, and did not want to go with a traditional style of showing flash cuts of the tragedy. We knew this was a risk and hoped it would work.

However, after the test screening, our viewers wanted to see more than just the field. We decided to bring Jay’s image back instead of staying in the field and found that was tricky. The read we liked from Jay (Jason Isaacs) was cut together precisely to work with our field image. To come back to the room, we would need to rediscover and find the balance between what we want and what the audience expects.  Meanwhile, we only had one or two takes of other characters during this moment and we needed to find the right place to shift the film ratio. It was a challenge to make this work and we thought we found the right balance for this artistic moment after months of exploring.

Filmmaker: Finally, now that the process is over, what new meanings has the film  taken on for you? What did you discover in the footage that you might  not have seen initially, and how does your final understanding of the film  differ from the understanding that you began with?

Hu: I always thought the film could end on Gail leaving the room. Once our characters have their moment of silence, the conflict is gone, the problem has resolved. I didn’t think we needed the epilogue where we see Linda come back to talk about another personal story. However, Fran thought this final moment was necessary to fulfill all the characters’ journeys. In the end, we kept it in our final cut.

Later, I found that keeping Linda’s last speech in the film grew on me. Every story has more than one side. We need to give people the chance to be heard. Sometimes if we can just put ourselves in other’s shoes for a moment, perhaps we would understand why it is not as easy as we seem to think. Forgiveness, empathy and healing are actions the world needs right now.