Liberties in the Room 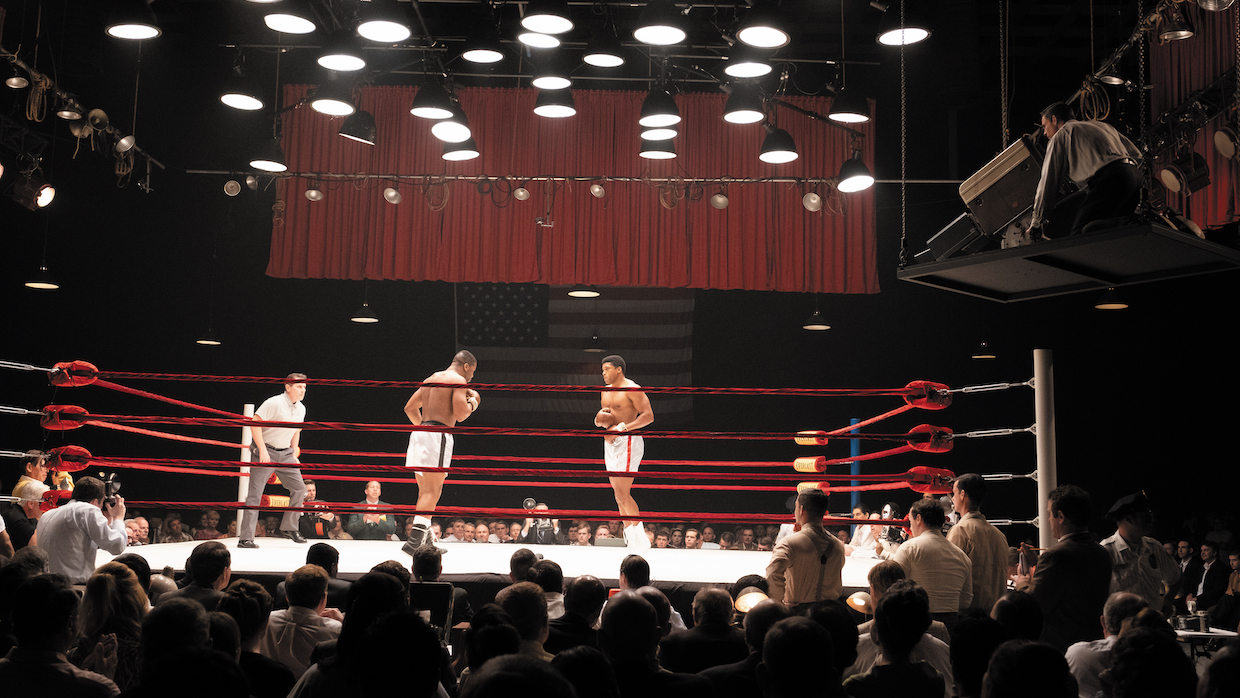 One Night in Miami (courtesy of Patti Parret/Amazon Studios)

The night after Cassius Clay clobbered Sonny Liston in their first bout at the Miami Beach Convention Center in 1964, the new heavyweight champion, who would later change his name to Muhammad Ali, celebrated his win in a hotel room flush with icons: his friends Malcolm X, Jim Brown and Sam Cooke. They stayed in a room at the Hampton House, a known safe haven for Black people during Jim Crow where social gatherings of various Black icons were not uncommon. Regina King’s feature debut, One Night in Miami, adapted from Kemp Powers’s one-act play of the same name, imagines what conversations Clay, X, Brown and Cooke might have had as they lumbered around that hotel room.

But the film’s production designer, Barry Robison, hardly had to imagine what the room and the Hampton House looked like. “That one night is so documented, it would blow your mind,” he says. Robison had plenty of black and white and color photography references to work from, including all the pictures Malcolm X took. Robison recreated the hotel’s 24-hour cafe inch for inch from photographs that famously documented the four friends sitting shoulder to shoulder at the counter, a crowd surrounding them. “We recreated it right down to the napkins on the tables,” he says. “You wouldn’t know if you were in the actual Hampton House or on a set.” Robison sent two people from his art department to Florida to the restored Hampton House and had them measure and photograph everything, including the iconic railings. He also stayed true to its color palette, “creamy yellow” and “turquoise blue,” which Robison describes as having a “breezy, light feel” characteristic of Miami. Exterior shots of a Hampton House stand-in were filmed in Thibodaux, Louisiana and the interiors in an empty gymnasium west of New Orleans in LaPlace.

The room itself was another story. Robison knew its small size was going to create blocking issues and be difficult to work in over a prolonged period of time. “Right off the bat, they [Regina King and D.P. Tami Reiker] said, ’Oh, this is so small!’” But Robison knew he could expand the set 20 percent without it reading false on camera. Then, that wasn’t enough. “We’re going to have to take a liberty,” Robison told King. They studied the floor plans of the Hampton House and their location in Thibodaux. “Malcolm is a celebrity, I could believe he’d have an adjoining room off of his hotel suite for a meeting or for guests,” he suggested, and King agreed, so he expanded the room. In doing so, there was now a window on both sides of the set, giving Reiker, more lighting options. Rather than fake depth through the windows, Robison used the blue breezeblock walls prevalent on the exterior of the Hampton House to “block out unnecessary things” they may not want to see, to make the transition between their exterior location and interior set seamless, and also so Reiker could “light through [the walls] and cast shadow and light.” Robison took inspiration from Wong Kar-wai and Christopher Doyle’s use of patterned lighting in films like In the Mood for Love and Happy Together. This cumulative effect of no depth looking out and patterned light bouncing in directs our attention back into the action in the room. Robison made linoleum flooring, which had its own “kick” and “bounce,” eschewing the original rugs because of mildew and other challenges posed by the tropical climate. Robison also says he was “fighting against being too generic with the room,” and “that’s how the details started to come to fruition. The paintings on the walls are midcentury Afro-American–inspired painters, and Janessa Hitsman, my decorator, found some fantastic period fabrics for the bed and curtains.”

“The next liberty we took was with color,” he says. King wanted the actors to look “fantastic” on the set at all times. “We had a number of shades of skin tone, from very dark to very light, and they all had to look good in that set.” Robison felt the cast members would look great against a green. “Because of the midcentury [design], I wanted the walls to have textural movement. So, we covered the walls in grasscloth wallpaper. We found a fantastic shade of green. My painters came in, we tinted it, we aged it, and that’s what you see in most of the set.” For the “contrasting wall of wood” in the room, many discussions were had to find the right tone. King and Robison also wanted the set to “feel masculine at all times,” and the actual Hampton House rooms’ pinks and blues would not have served either goal.

King needed her cast to look great but also free to roam around the room. “So, I cut camera ports into the walls, basically behind mirrors and pictures that can hinge open. This is a trick I learned years ago in soap operas. In soap operas, you have these lumbering, huge cameras, and you can’t fly walls quickly. So, a camera port would open up, and you can get the lens right there, but they’re not in the room with the actors. So, we did that. We flew the ceilings, and of course, we did have flyaway walls when needed. But by giving Regina camera ports, it allowed her to have full freedom of performance within the space,” Robison explains.

It is probably no coincidence that liberties were taken in the room where King and her writer Kemp Powers took their own in dramatizing what might have transpired one night between four iconic individuals. In retrospect, the thought of such a casual liaison among greats stimulates the senses and almost seems fantastical. It certainly could not have happened in just any little hotel room, but in one that took on their caliber, accentuated their features and let four dazzling minds have their way about it.