Choose Your Own Future: Adam Curtis’s Can’t Get You Out of My Head 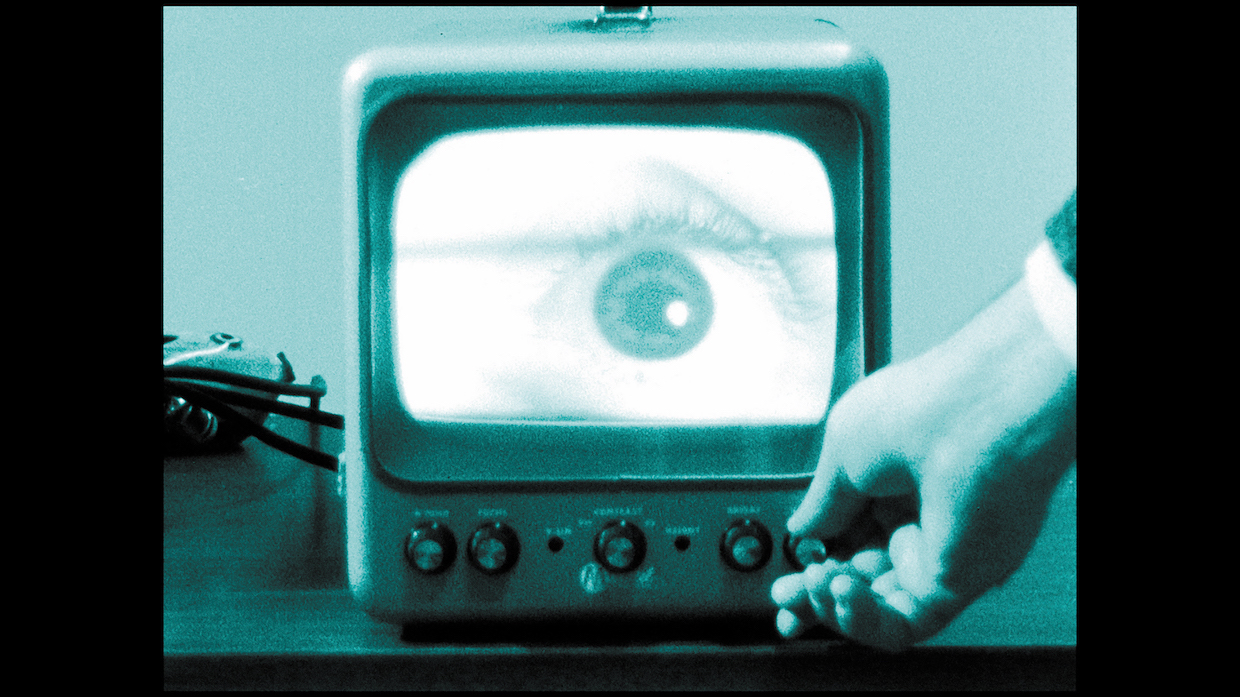 by Brendan Byrne
in Issues, Reflections
on Apr 8, 2021

While Adam Curtis has been making films since 1983, he first gained a kind of international recognition that once might have been termed “cult” with The Century of the Self (2002) and The Power of Nightmares (2004). These films source-coded the psychological and political terrains of the neoliberal landscape, deftly flaying away the already-decaying narratives of the Bush/Blair era. Deploying a voiceover pitched somewhere between Marxian don and MI-5 briefing, the twisting, layered narratives of Century and Nightmares articulated answers that were neither easy nor comforting, but answers all the same. Contemporary society was a managed “dreamworld,” and the stories we told ourselves to live were deep cover for the real forces that controlled our world. Curtis unwound these narratives with sure hands.

The films are assembled from the BBC archives, using raw footage from half-remembered segments, unedited interviews and plenty of obscure B-roll. In the pre-YouTube/smartphone era, recontextualized or previously unseen chunks of the spectacle were still capable of generating considerable frisson. With Obama/Cameron’s return to neoliberal basics, Curtis’s next works fell on even more fertile ground. All Watched Over by Machines of Loving Grace (2011) was a techno-determinist, technophobic jeremiad delivered at a time when people still got pissed off at you for not having Facebook. Bitter Lake (2015) was a fantasia of neo-imperial violence coupled to a fairly deranged secret history of Saudi Arabia and Afghanistan. It is, perhaps, Curtis’s most effective film, if one assumes that it is fiction. (Curtis has long denied his status as “artist,” which is becoming increasingly unfortunate.)

These films insisted that the neoliberal order had become exhausted, unable to envision new futures. The consensus fictions of the 20th century had dissolved, leaving only the after effect of marketing copy, its pitch long since forgotten. Our lives ached for three-act structure and sub-beats that ruled the content we consumed. It’s not hard to see why Curtis gradually attracted a sizable following among the increasingly radical political sub-groups that were mutating under Obama’s placid, reassuring smile.

In the year between Bitter Lake and HyperNormalisation (2016), something shifted. Backlash fomented on Twitter, where many previous Curtis partisans now performed exhaustion at the very idea of a new film. Part of this was the acknowledgment that Curtis’s style had hardened into a brand. (See the [accurate] Adam Curtis bingo card, which dropped the same day as HyperNormalisation.) Twitter had morphed into a machine for stanning content producers like Curtis, those who exist just far enough outside the mainstream to be worthy of ideological stress-test, only to shit all over them. It also probably didn’t help that HyperNormalisation positioned Occupy as an extension of Boomer counterculture’s insular individualism. Curtis’s new series of films, Can’t Get You Out of My Head (2021), reasserts that the American left is just another expression of post-war individualism (which Curtis has spoken of as a reaction to fascism and communism) and that a collective ethos was only rediscovered after, uh, 9/11. Curtis has made clear in interviews that he considers himself an individualist, simply by accident of the society he was born into, but sees collectivism as the only force currently capable of animating anything like a “new” future.

There is another reason for audience exhaustion, however, and it is the source of the even greater backlash that has greeted Can’t Get You. Curtis’s style of attack was always calculated to deal with the neoliberal consensus, but no one believes the narratives of neoliberal power anymore. In David Harvey’s A Brief History of Neoliberalism (2005), the Marxist geographer defines neoliberalism as an order in which “human well-being can best be advanced by liberating individual entrepreneurial freedoms and skills within an institutional framework characterized by strong private property rights, free markets, and free trade.” Harvey posits that the historical process which brought about this order was dependent on “much ’creative destruction’…of prior institutional framework and powers.” This necessitated the destruction of the historical narratives that had shaped and given meaning to the previous order; neoliberalism razed the ground that defined “the human.” The new narratives it seeded, however much they were marketed as ancient and irrevocable truths, never quite seemed to possess the same ideological strength as the old ones. Professional politicians have become more transparently unable to deliver on even simulacra of their policies. This was deemed acceptable by a majority when that majority was not beset by an accelerating accumulation of crises. Today, neoliberalism serves no other function than to funnel an increasingly large amount of wealth to an increasingly small segment of society.

At 7 hours and 57 minutes, Can’t Get You offers a greatest hits of Curtis’s attacks on neoliberalism’s narratives, including:

The single new (well, new to me) narrative: Contemporary conspiracy theories are the results of humans behaving like neural networks; i.e., creating new connections from vast amounts of online information. Because humans have limited processing power and the need (whether inherent or learned) to create narratives out of said connections, the resultant conspiracy theories deliver moral or ethical meaning and function as political calls to action, often ending in violence.

Curtis insists that he hates conspiracy theories and finds them “boring.” His habit of presenting his secret histories as the sole hidden levers behind historical shifts is defended by his admirers as rhetoric. Curtis referred to these as “wild leaps” in a recent New Yorker profile, stating “that’s what all journalists do…. But since they’re actually just saying the same old thing, people don’t notice the leaps.” (This assertion comes from the person who purrs, “It was going to be the perfect system,” while describing how Deng Xiaoping and “the bankers” consciously developed contemporary global capitalism.)

It is harder to defend Curtis’s factual inaccuracies. In Can’t Get You, he states that Eduard Limonov was Boris Yeltsin’s only political opposition, that Black radicals did nothing to challenge mass incarceration in the United States during the 1990s and that there were no protests in America against the Iraq War. These three statements are complete bullshit. They make it harder to believe Curtis has done his due diligence on the substantial portions of Can’t Get You devoted to the later life of Jiang Qing, the potted history of the origins of the global humanitarian movement or the story of Michael X, a one-time Notting Hill slumlord enforcer turned Black power activist.

The conspiracy theory, or perhaps its progeny, has moved from the margins of politics to become an important factor in post-neoliberalism. This still-nameless landscape churns with myriad potential orders, none of which are in thrall to the managerial class that has guided us through the past 50 years. The retconning of this managerial class as a malevolent cabal has brought nascent anti-global authoritarian movements scads of new adherents. The effective contemporary narratives are not manufactured segments of the spectacle, but DIY-assembled alternate presents, with world-building more intricate than any screenwriter could devise advocating asymmetrical violence.

Can’t Get You attempts to trace these narratives, beginning with the Patriot Act and Google’s shift from making data available to the public to extracting data from the public. Here, individualism is forgotten in the face of the supposedly outside-context problems of the War on Terror and the dot-com bust. As a result, “the West” (whatever that means) falls back into nationalism. (Curtis presents Limonov’s interest in Serbian nationalism as a precursor to this moment.) This approach refuses to acknowledge that the virulent new forms of community-making now burning through our screens are not mere retreads of old nationalisms. QAnon, NRx, 5G and white ethno-nationalism leap across previously unbridged gaps of language, geography and culture as easily as they do logic.

Whether they are even “conspiracy theories” is open to question. The phrase originates in Karl Popper’s term “the conspiracy theory of society” from The Open Society and Its Enemies (1952). Popper observed that “a minority of social institutions are consciously designed, while the vast majority have just ’grown,’ as the undesigned results of human actions.” When certain actors discover “the difficulties which stand in the way of social action,” they trace these back to “direct design by some powerful individuals and groups,” rather than accepting the inherent complexities of social institutions.

Artist and filmmaker Daniel Keller differentiates QAnon as “a massive Astroturfed social movement.” “Astroturfing” is a sub-category of psychological operation that involves faking a grassroots movement. QAnon thus does not originate in a reinterpretation of the past to explain the present. It is an attempt to seize the future by inspiring direct action in the present. If QAnon fits within the genre of the conspiracy theory, it is a permutation drawing on political propaganda, cult lore and the logic of multilevel marketing schemes.

Curtis told Filmmaker in 2015: “What politics should be doing is saying, ’Look, the world is incredibly complex, sometimes very frightening. Here—I’m going to make sense of it for you. And I’m going to take you somewhere, come with me.’ It doesn’t do that any longer, so we’ve moved away. It’s thrilling, it’s dangerous—because someone will come along and possibly tell a story that might be dangerous.”

Those dangerous stories are no longer mere possibilities, and Curtis’s films, once so effective against the narratives of neoliberalism, are blunt and useless weapons against them. Curtis has long said that our only hope is to learn how to envision new futures. We have, and these new futures have begun to consume our present.