“What is Our Duty Today as Viewers?”: Abdallah Al-Khatib on Cannes (ACID program)-Selected Documentary Little Palestine (Diary of a Siege) 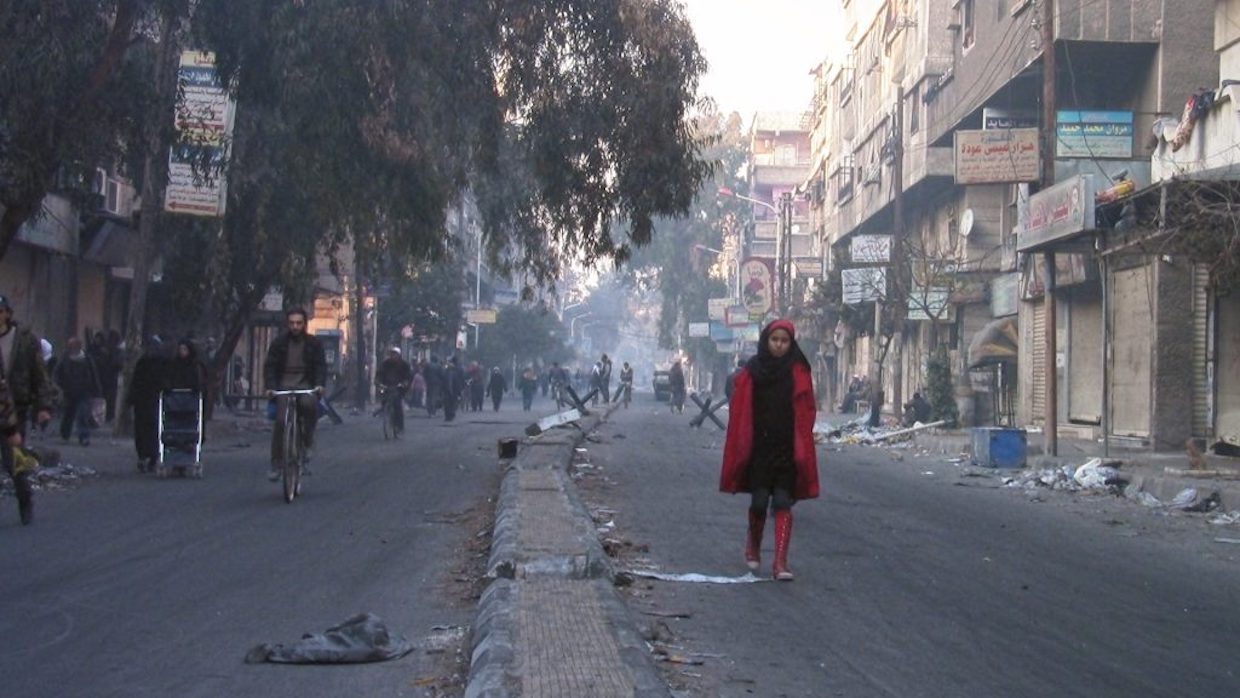 Little Palestine (Diary of a Siege)

by Lauren Wissot
in Directors, Festivals & Events, Interviews
on Jul 12, 2021

A movie could be made out of the making of Abdallah Al-Khatib’s heartbreakingly poetic Little Palestine (Diary of a Siege), screening in the ACID program at this year’s Cannes. The film’s title refers to Yarmouk, a district in Damascus that served as the largest Palestinian refugee camp in the world from 1957 until its destruction in 2018. In 2013 the Al-Assad regime set up a siege, depriving Yarmouk’s residents of food, medicine and electricity while haphazardly dropping barrel bombs on what it deemed a rebel stronghold.

An accidental filmmaker, Al-Khatib—born and bred in Yarmouk until ISIS expelled him in 2015—was a sociology major at the University of Damascus when the revolution broke out in 2011. He only started documenting daily life around him after his filmmaker friend Hassan Hassan, one of the protagonists of 2013’s The Shebabs of Yarmouk, left the camp and left Al-Khatib with his camera. Subsequently, Hassan was tortured and killed by Syrian forces, while Al-Khatib was eventually smuggled out, leaving the hard disks behind to avoid the risk of confiscation. Al-Khatib only saw the footage again once he’d arrived safely in Germany. (The camera returned to Syria to keep filming without him.)

Fortunately for Filmmaker, Al-Khatib (with an assist from his translator) found time just prior to the poignant doc’s Cannes debut to fill us in on the intersection of sociology and cinema, the role of media in conflict zones and the importance of asking hard questions before providing any solutions.

Filmmaker: You’ve said that the siege imposed “two kinds of change, social change involving people’s relations with one another, and psychological change involving a person’s relation to their self,” which made me wonder how your background in sociology informs your approach to filmmaking. What has one discipline taught you about the other?

Al-Khatib: Yes, in fact the siege triggered two kinds of changes. There’s the social change, which relates to the relations between people. The social contract between people was upended—as a student of social science this was so obvious. This social aspect really also had an impact on how I made sense of the situation in Yarmouk. I am not sure how apparent this social science gaze is in the film, but it really shaped my personal understanding of the situation.

Secondly, there’s the role of cinema. The process of filming—that direct relation to people through daily talks and interviews—really helped me understand this social dimension, especially concerning societies in the context of war. So, cinema is a tool and process to arrive at this understanding. I guess you can really say that there is a mutual relationship between my social science and my cinema gaze.

Filmmaker: I was particularly struck by the parallels between siege and incarceration. There’s the obvious fact of being trapped, of course, but also the notion of time being transformed. And then there’s the difficulty of “re-entry,” that transition to freedom in which a part of you nevertheless stays behind. Do you find that the PTSD is similar for the once imprisoned and those who’ve survived siege, or are there stark differences due to the extenuating circumstances?

Al-Khatib: I can talk more on the siege, as I didn’t live the experience of incarceration—although my dad was imprisoned, as were many of my friends. Reflecting on their stories of prison experience, I think I can say there is something similar about being incarcerated and besieged. The siege means to be deprived from moving around; there is someone that controls your food and water. Whenever they want they can close the tap, cut the electricity. So, these are very close similarities. I think that it’s an important point to talk about the traumas of both experiences, and I am sure that there are even more similarities.

The experience of siege has another layer that makes it especially cruel: You live your own siege and see others living this siege with you, including a 6-month old child dying from starvation, and not one of you can change it. You see elderly people that need a doctor and nothing can be done. Of course, incarceration in Syrian prisons means that children and elderly people also get detained. But generally, I think siege has a special cruelty.

Filmmaker: The doc’s voiceover is so achingly poignant and poetic. Were the lines taken from your treatise The Forty Rules of Siege, or was it crafted specifically for the film?

Al-Khatib: The voiceover is based on The Forty Rules of Siege, but we made some adaptions to fit with the narrative of the film. The original text was written during the siege of Yarmouk, and therefore it was important for me to use that for the voiceover. Since it was created during this time, all the things mentioned in it bear that experience—it appears so honest to me. The text really resembles the siege itself. If I tried to write the voiceover today, so outside of that, I wouldn’t be able to conjure the same pictures.

Filmmaker: You’ve noted that you were “keen to document human experience poetically, in all its contradictions, rather than documenting war crimes and building criminal cases for human rights violations.” As a filmmaker who adamantly refused to sell any footage to news stations, are you ambivalent about the role of media (or perhaps Western media in particular) in conflict zones?

Al-Khatib: I am, of course, not against the documenting of war crimes—I think it’s very important for accountability. I was part of a human rights group inside of Yarmouk; we were building up data on the numbers and names of people dying. At the same time, we were documenting cases of severe human rights violations.

However, personally I didn’t have the guts to film bloody scenes and direct death. The rest of the team did exactly this important work. Now that we are in Europe, we are collaborating with several human rights organizations and international entities. This includes the IIIM—the International, Impartial and Independent Mechanism— which aims to “assist in the investigation and prosecution of persons responsible for the most serious crimes in the Syrian Arab Republic under international law.” So, I consider this to be very important work.

That said, the material you use for making cinema and for building up cases for the prosecution of war crimes differ greatly from each other. They are just not the same. The footage we use for cinema has to aim for the preservation of people’s dignity first and foremost, while the “picture of the victim” is something quite different. Look at the photos from the Caesar files—those are very important for proving the crimes of the Syrian regime. I am against using them in media, though they do need to be accessible in a suitable archive. The same goes for the material related to the siege of Yarmouk. We are part of this material! Our hard drives are archived with a UN organization in order to ensure that the contents can be used for the prosecution of war crimes and crimes against humanity.

Concerning the media overall, I personally didn’t want to sell any material to news agencies, because then it would be placed in a context beyond my control. Specifically, it might be put in a different political context, and I might not agree with the political orientation of many of these news agencies. Also, there were already many people selling their material, so I didn’t really see the need. I did have one experience with the BBC in which I was commissioned to film, but I did it because I personally trusted the journalist. At the time it was very important to produce a narrative on the siege of Yarmouk.

Once again, I’d just like to stress that media plays an important role. There is no doubt that it is one of the few tools we have to shed light on our causes.

Filmmaker: You’ve also said that you don’t think the film’s “task is to tell the whole history of Yarmouk, its people and its destruction, because the task of cinema is to raise questions rather than to provide answers.” So what sorts of questions are you ultimately hoping to raise with this film?

Al-Khatib: I don’t think that any film can provide all the answers anyway. Likewise, it’s hard to understand everything that happened in Yarmouk through Little Palestine, but it certainly creates an entry point for finding more information.

The questions that I want to bring up include that of moral responsibility: What is our duty today as viewers? We need to think, for example, about Yemen through the lens of Little Palestine. It concerns all of us. We need to support people that strive for change in these areas. We shouldn’t ignore them.

Another point concerns Palestine and Palestinians. I want people, especially European audiences supportive of Israel, to ask themselves: Who are these Palestinians? Why do they live this ordeal? Why do Palestinians have to pay a double price? If we neglect to ask about the crimes that led to the expulsion of Palestinians—and that caused the Nakba, the originator of our ordeal as refugees which began in 1948 and lasts until today—then we simply cannot understand the situation in Yarmouk. And, of course, there is the question of the role of the Syrian regime and the suppression of the popular uprising in Syria—its historical responsibility concerning the siege and the destruction of Yarmouk, and of Syria in general.