“I Was Directing, and I Ripped My Bicep”: Dolph Lundgren on Castle Falls, On-Set Gun Safety and Fighting with Scott Adkins 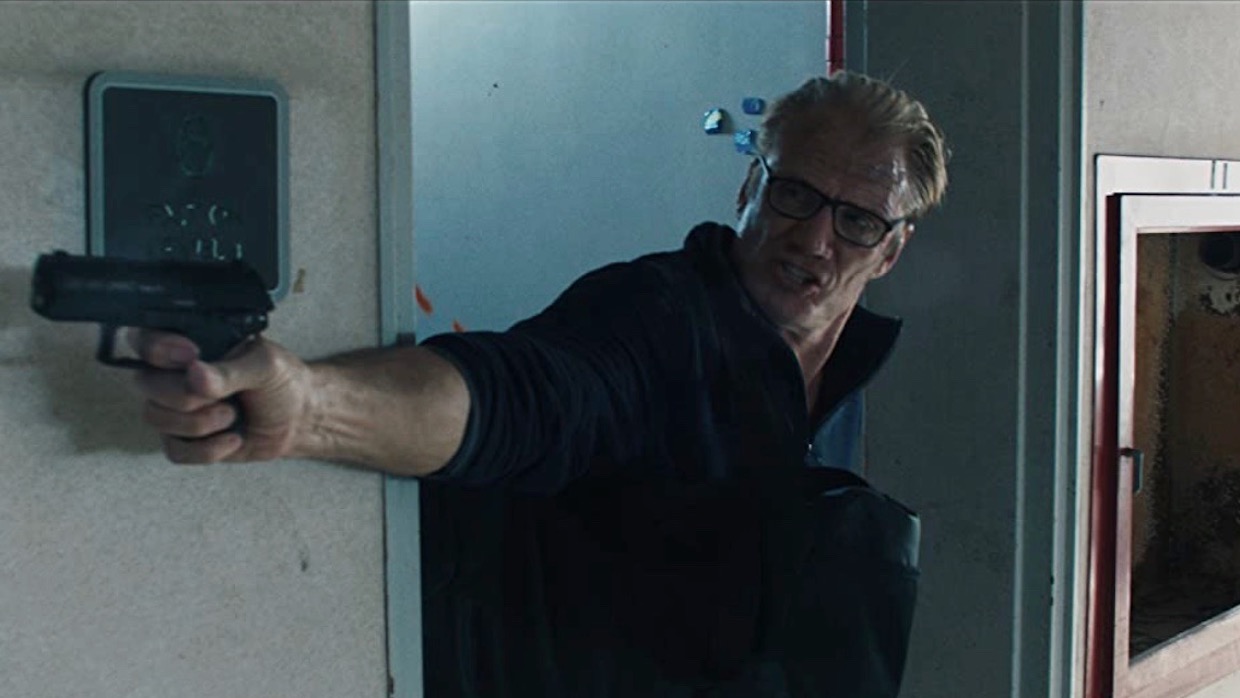 by R. Emmet Sweeney
in Directors, Interviews, Screenwriters
on Nov 30, 2021

At the age of 64 Dolph Lundgren remains as busy as ever, alternating between Hollywood mega-productions like Aquaman and the Lost Kingdom and small-scale action movies like Castle Falls, which he produced, directed, and co-starred in (alongside Scott Adkins). Castle Falls, which opens December 3rd in theaters, on demand and digital, is a compact crime film in which millions of dollars are hidden in a derelict hospital slated for demolition. A prison guard (Lundgren), an ex-MMA fighter (Adkins) and a desperately violent gang converge on the crumbling edifice hoping to strike it rich before everything explodes. I spoke with Lundgren on the phone about this resourceful but frequently snakebit production, which was shut down on the first day of shooting in March 2020 due to the COVID pandemic.

Filmmaker: It’s been eleven years since you directed The Killing Machine (aka Icarus), what drew you back to directing after all that time?

Lundgren: I wanted to direct more but got caught up in doing three Expendables, Aquaman, Creed II—bigger movies I also wanted to do. Then, about two years ago, I came across this script that was a two-hander and thought, “OK, this is something I can do—co-starring with somebody else.” I was just interested to see how it would feel to direct now, with a little more experience, both life experience and experience as an actor.

Filmmaker: What led you to work with Scott Adkins on Castle Falls?

Lundgren: Look, there is a character in there who is an MMA fighter, a little bit down on his luck, and he ends up stumbling on this cash while doing a demolition job at a building site. And obviously Scott is a good fighter, so he can do his own fights. I thought that is why he is perfect for the role—that, his age, and the fact that he can fight, we don’t have to use doubles for him, and he’s a great guy to work with. I’ve worked with him before, so between his skills and personality I thought it was a good mix.

Filmmaker: What was the process of working on the fights with Scott and fight choreographer Tim Man?

Lundgren: We got shut down the first day of shooting last March, so I had an extra six months of COVID isolation to work on that stuff. Basically Tim Man was supposed to come to America but couldn’t because of COVID, so he would send previz tapes over. Then, when we got together again, Scott would rehearse with the stunt guys. We were very lucky we had a great camera operator [Eric Linden], who was a stuntman as well—he doubled Scott for a few throws and things. So, we had a handheld operator who could anticipate all the moves, and then the fights are broken up into sections. I would leave it up to Scott and his guy how they want to shoot it. Scott’s very good doing this method. Also, he was instrumental in editing some of the fights. I wanted it to feel real, a little bit raw, sort of like if it happened in real life. There is nothing fantastic in there, but that you see, especially with Scott Adkins doing his thing. Even with me we got into it. It was a bit rough, because I was directing, and I ripped my bicep in my left arm. Apart from that, I hope the audience appreciates it when you see the actors doing it themselves.

Filmmaker: How far along where you on that first day before things closed down?

Lundgren: Only half a day. It was like March 17th or something when everything happened. We were a week in the states. We only shot half a day so we could collect some insurance, which was good for us, then put everything back together last October.

Filmmaker: How did you find working with the safety protocols when you returned shooting? Did you find them restrictive? And how do you handle gun safety on set?

Lundgren: There were two sides. One was COVID, and that was very strict. It complicates filmmaking because everybody has to be tested and if there’s a positive you have to test everybody again, halt production. Happened to us a couple of times. That was a headache for sure. Once filming it was usual safety on set, it’s just important. In our case we used dummy weapons and CGI muzzle flashes and CGI shells coming out of the weapon so we didn’t have any real firing weapons. That makes it easier.

Filmmaker: Using dummy weapons and adding muzzle flashes in post—is that your preference or does it just depend on the nature of the film?

Lundgren: You know, it is easier to do it that way, and safer. Maybe on a special occasion, if you are doing Expendables and firing a 50 caliber machine gun, say a vehicle-mounted weapon then…you could do CGI there too. Sometimes it’s more difficult to make it look real. But I think with handguns and shotguns and regular rifles it’s certainly…with today’s technology you can’t tell the difference. And obviously it’s much safer, and less worry on set.

Filmmaker: How much do you get involved in overseeing the CGI, like approving how the muzzle flash looks?

Lundgren: Yeah you have to review everything, make sure they are not too large, too big. We have silenced weapons that have less of a flash, and regular weapons that have more of a flash, also how the shells come out of a shotgun versus a handgun—all of those little details you have to look at. You also have to decide on the hits, on the gunshot wounds, how much blood to show. There is a lot of detail there. Though it’s fairly standard these days, not that big of a deal to stay on top of.

Filmmaker: You mentioned that you tore a muscle in your bicep. What scene did that occur in?

Lundgren: The fight with Scott Adkins, where he makes a move when I’m trying to put him in a chokehold and he kinda grabs my arm and yanks on it over his shoulder, almost like an armbar on the shoulder. Because I was pulling back to complete my next move, it ruptured a tendon. There’s two tendons in the bicep up by the shoulder, and I ruptured one. The one that I ruptured wasn’t that painful. Basically you have to rest for a week or two. They don’t do anything, they don’t do surgery. The bicep is still attached by the main tendon. It’s a bit awkward and painful for a couple weeks. It happens in the spur of the moment when you move that fast.

Filmmaker: How long was the shoot when you put the whole thing together?

Lundgren: The shoot was so crazy—it ended up being 17 days, I believe, because we lost a few days to COVID. We originally had 20. So in 17 days we shot a 105-page or whatever it was script. Versus Aquaman, which was 109 days.

Filmmaker: The Alabama locations you selected really gave it a level of grittiness that helped the film. Was it an economic decision to shoot there? And what went into selecting those locations once the city was chosen?

Lundgren: Alabama was picked for tax rebate purposes, financial reasons. When I got there I started looking for locations and tried to incorporate some of the history, some of the backstory in the movie to parallel with real life. For instance, the hospital in the movie is a real hospital. It was kind of infamous in the ‘60s. They had these Freedom Riders, northerners, whites, who came down to ride on the Blacks-only buses during segregation. Then they were beaten up by the cops. The hospital refused to treat them. That was the history of that hospital, and I incorporated that. The mayor of Birmingham is African American and I had him refer to that history in the movie. There is a parallel there. It made it feel a little more real for the actors, too.

Filmmaker: I also enjoyed your personal touches. You called the demolition company that Adkins works for “Lundgren Construction.”

Filmmaker: One of the things I liked about Castle Falls is that every character, down to the smallest one, seems real and lived in, from Scott Adkins’ failed MMA fighter to your character who can’t afford to pay his daughter’s medical bills. You cast your own daughter, correct? Were these details in the original script or things you added later on?

Lundgren: Yes. Some were in the original script. I added some of that stuff because I wanted people to have empathy with everybody to some degree, even with the quote-unquote “bad guys.” They are there for simple power/money reasons. But they have a story too, and the actors appreciate they can work with characters with real human problems. I think it’s just much more satisfying to act, whether you are fighting or whatever you’re doing, to show you’re motivated, to show why you do it. It makes it more of an acting job. I added some of those things as much as I could. You’ll see a lot of that in the next picture too.